Young Labor members would not get Gilligan's Island references.

‘Very Young Labor’. Well after a month worth of factional wheeling and dealing, the Victorian Young Labor conference did take place over the weekend, although the results from the vote for president are still being counted, and may not be known for a few days. There were three candidates in the end Josh Gilligan, Will Bennett and the left’s Annalivia Carli Hannan. We hear from a tipster that Carli Hannan is likely to come out on top, after deals between the right factions fell apart. We hear that the numbers fell away for Bennett and Gilligan after a split in the SDA faction between the right and the Somyurek moderates at the last minute, where those who split joined the ShortCons to form Centre Unity and supported Carli Hannan in exchange for positions on the executive committee. One source says: “It will be hard for Gilligan to take the presidency with his main backers in the SDA split and the rest of the party supporting the left”.  Sources say both former Victorian MLC Adem Somyurek and Senator Stephen Conroy got personally involved in steering their factions, with Conroy stepping into the fray first. Somyurek was recently forced to resign from his job as small business minister after bullying allegations were made against him. A tipster said “it’s highly unusual for senior party to step in and was a bit of a shit move from Conroy”. We called both Conroy and Somyurek this morning, but didn’t hear back by deadline.

We’ve also heard from some attendees who are quite disgruntled at the way the conference was run, saying it felt “sleazy”, with powerbrokers filling in ballot papers for members of their factions.

These flyers were also dropped from a balcony at Melbourne’s Trades Hall onto the crowd while they were waiting to vote, but no one claimed responsibility for the dodgy photoshop job. Ms Tips was surprised anyone in Young Labor would get the reference to the show, which aired when their parents were children. 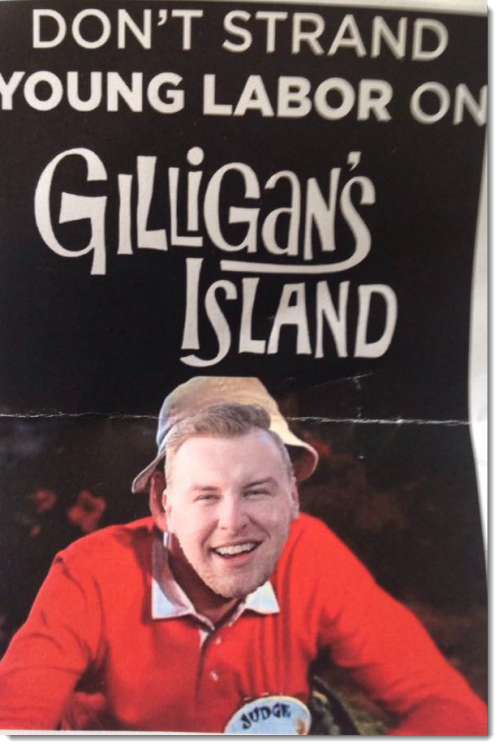