Do frequent editorial reviews at the ABC help steer the ship, or just provide ammo to Aunty's critics? 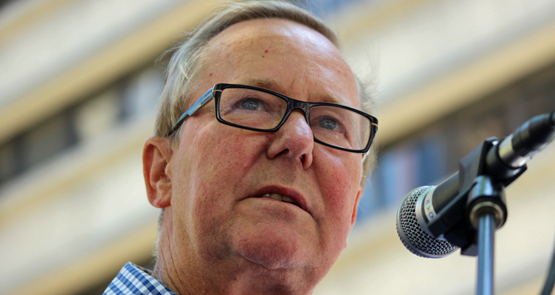 A former ABC staff-elected board director has criticised the body’s regular editorial reviews, saying they undermine the authority of the ABC’s editorial directors while doing little to appease the criticisms of the ABC’s largest detractors.

Former 7.30 NSW host Quentin Dempster, who took redundancy from the ABC late last year and is now a contributing editor at The Sydney Morning Herald, told Crikey of his concerns this morning. His comments come in the wake of the fifth editorial review to be conducted since chairman James Spigelman announced at the National Press Club in 2013 that the ABC would implement a new policy of conducting four editorial reviews per year.

The ABC last night released a review by journalist Steve Harris, a former executive of both News Corp and Fairfax. The review examined the ABC’s coverage of Education Minister Christopher Pyne’s recent higher education reforms. Examining 54 segments on the issue that aired on ABC radio, television and online between the March 2 and March 30 this year, it found the vast majority met the ABC’s editorial guidelines. But Harris did ping several segments for what he viewed as inappropriate editorialising. ABC Radio and news, which were responsible for several of the criticised segments, have promptly rejected the criticisms, taking issue with Harris’ characterisation of the ABC’s editorial policies.

Dempster says the ABC is already highly accountable through its code of practice, which is overseen by the Australian Communications and Media Authority, as well as through defamation and contempt laws.

“These audits are political, and part of the usual ABC pre-emptive buckle to hostile government,” he told Crikey this morning. “They usurp the authority and leadership of the editor-in-chief and director of news, whose role it is to lead [the ABC] to higher standards.”

The reviews were instituted when the ABC was being criticised for partnering with The Guardian to air documents that showed Australia had spied on then-president of Indonesia Susilo Bambang Yudhoyono’s family. Because of this, many see the reviews as tools of political leverage for use by the public broadcaster’s critics.

“Buckling to the Murdoch/Abbott vilification of the ABC never works,” Dempster said. “They will never be satisfied. Even when the chairman enacted this daft idea, Murdoch henchman Piers Akerman demanded his resignation. The ideological agenda is to undermine and destroy public broadcasting.”

The last time the ABC commissioned such a review, Fairfax editor and business journalist Colleen Ryan was paid $24,000 to review the ABC’s reporting of the federal budget. She offered some guarded criticisms of Sarah Ferguson, which ignited a media storm around whether the Walkley-winning journalist had been too fierce in her questioning of Treasurer Joe Hockey after the 2014 budget.

The ABC itself rejected the finding, but many questioned the usefulness of having the reviews in the first place. Writing in Crikey, for example, Four Corners host Kerry O’Brien argued that:

“In now asking its interviewers, often in difficult, high-pressure circumstances with limited time, to be second-guessing some future single arbiter on highly subjective benchmarks as they prepare and deliver their questions, the ABC board risks creating a climate of self-censorship, sanitisation and timidity, which would seriously undermine the foundations of the institution’s independence.”

With the latest review, it’s not clear what the ABC’s reporters are meant to think. Because despite the ABC-commissioned criticism, the reporters’ own section heads largely rejected the specific findings of the Harris review.

For example, a segment on Tripe J’s Hack was cited as a lapse when reporter Alice Workman filed a report on the Education Minister’s efforts to gain crossbench support for his bill. She described changes to the bill as “little tricks”, which Harris wrote was “unnecessarily pejorative, risking the reporter being seen to be judgemental, or less than impartial or open minded”.

But the ABC’s radio division said there was no prescription in the ABC’s guidelines relating to the tone its presenters used. It said its presenters weren’t prohibited from putting forward analysis and personal views, provided this didn’t drown out other perspectives, and also pointed out that its reporters often put forward strong views in a bid to play devil’s advocate, thus drawing out responses from their guests to common criticisms of their position. On the Hack segment in particular, radio bosses noted that Hack has a responsibility to speak in the language of its 18- to 24-year-old listenership, bringing a lighter tone to political coverage. “An offhand term like ‘little tricks’ is nothing more than an attempt to describe cleverness or political manoeuvring, rather than passing judgement on the minister’s actions,” ABC Radio’s response noted.

Meanwhile, an interview of ABC Perth host Geoff Hutchison with University of Western Australia VC Paul Johnson was deemed “unsatisfactory” (defined as a significant departure from the ABC’s standards) after the presenter “veered off the neutral script, allowing his own views to come through”. “This ‘editorialising’ gave the impression the presenter had a dim view of the Government and Ministerial policy approach and advocacy. This came through direct and critical commentary, and did not satisfactorily evidence neutrality or impartiality,” Harris wrote. ABC Radio responded that it considered the interview “fair and reasonable, and met the ABC’s standards for impartiality, which we again note is not the same as the ‘neutrality’ cited by the review.”

Another segment, on Radio National’s AM program, was also described by Harris as “unsatisfactory” after host Michael Brissenden introduced the segment by saying the government’s problems in the Senate had gone from “bad to worse”. “The phrase was somewhat of a simplistic over-statement, contrary to ABC Impartiality Guidance Notes referring to the avoidance of ‘the desire to overstate key points, so that every development becomes a breakthrough, every setback a crisis,” Harris wrote.

Radio National’s AM program falls under the news division — which similarly rejected the review’s findings against specific segments while welcoming the suggestions made more broadly. The “bad to worse” introduction, the division’s leaders wrote, was not an “overstatement”, as the government’s relationship with the crossbench had demonstrably deteriorated at the time the segment aired (this was around the time Tony Abbott described the crossbench as “feral”). “News rejects the suggestion that the interviewer was attempting to manufacture a crisis narrative, i.e. ‘the smell of blood’ or that it was not in accordance with the ABC’s guidelines on impartiality.”

In a statement, Spigelman welcomed the review, saying even good work could always be improved through outside perspectives:

“As a direct result of this latest review, the ABC acknowledges the need to better use the range of its platforms and programs to provide more thoughtful and contextual coverage of important and complex policy issues. The Board notes that the Harris review, like its predecessors, has demonstrated the robust nature of the ABC’s coverage against the standards set out in our Editorial Policies. Over a range of policy topics and programs/platforms traversed in five separate audits, the ABC has been independently assessed as consistently providing the quality content our audience demands.”

Publishing Quentin Dempster’s views about a report on ABC bias is the same as publishing Piers Ackerman’s views on News Corp bias.

The difference is that Akerman is a bombastic idiot and Dempster a journalist who sticks to facts.This story examines the criticisms and finds many of them unjustified. Akerman would just bluster and avoid the facts at all costs.

QD is quite right. Giving into blackmailers, bullies and terrorists never ever works

Pity the ABC board doesn’t realise this.

I concede that my choice of right wing journo exposes my post to your first point John. I’m no fan of Ackerman, who, if Abbott was caught red handed robbing a bank, would blame the bank. He’s not in the same league as the more erudite Dempster.

But that doesn’t alter my basic point, which is about objectivity. Quentin Dempster is a paid up member of the Ultimo green left groupthink that pervades the ABC and would never ever find fault with it.

The more intellectually competent ABC staffs of the 1960s faced far stronger right-wing pressures than is the case today and still managed to produce better and more balanced programmes than the current mob seem able to manage.
But Crikey Landers don’t tend to want anything other than their brands of prejudice, and their brand of censorship.