Bad news for the Murdoch clan. Plus other media tidbits of the day.

Clouds over the Sun King. A limping Rupert Murdoch (with cane) is in Australia for a News Corp board meeting and earnings release (plus some rearranging of personnel and assets here, and a lunch today at Sydney’s Catalina eatery at Rose Bay), but he can’t get away from bad news here and from home. Let us help by counting the ways:

Yesterday morning he had to learn that the move into the Ten Network share register by News’ 50% associate, Foxtel, had not helped win the NRL free-to-air broadcast contract, as Fox Sports and Foxtel executives had been boasting would happen. Fox Sports and Foxtel will have to split half the broadcast deal from 2018 to 2022, much as they split it now with Nine.

Then Rupert — along with sons Lachlan and James, the top managers of 21st Century Fox — would have received even more shocking news yesterday, enough to cause heads to roll back home in the company’s film studios. The Fantastic Four movie has bombed in its release in the US over the weekend. And by bombed, we mean bombed: Hollywood Reporter and Deadline.com both say it opened to just US$26.2 million from 3995 cinemas across North America. Hollywood Reporter said it was “one of the lowest openings of all time for a big-budget studio superhero movie”. The movie cost US$120 million to make, so a painful experience for Fox’s newbie co-executive chair in Lachlan, and CEO in James. Fantastic Four was beaten by the Tom Cruise Mission Impossible: Rogue Nation, which was on its second weekend of release and should have really dropped away.

The third piece of bad news is something the Murdoch clan already knows about but haven’t been willing to talk about — the weak ad revenue performance in the June quarter at Fox’s US free-to-air and cable businesses. US group MoffettNathanson Research reported on Friday that national TV ad revenues at major US free-to-air and cable groups fell 2.7% overall. MoffettNathanson said national advertising fell 17% at Fox in the fourth quarter to US$401 million. Among the big cable groups, Fox’s revenues were down 2% to US$601 million. — Glenn Dyer

Not Pravda. We’re still not quite sure what the Labor Herald is, and it seems plenty of Labor types are in the same boat. The “openly biased” news outlet wrote a straight news story on the government’s new environmental policies, briefly quoting a press release from Labor spokesman Mark Butler before going on to extensively quote LEAN (Labor Environment Action Network) and the Climate Institute. That drew a rebuke from Queensland Labor Senate candidate Anthony Chisholm, who pointed out on Twitter that the outlet “should be promoting and advocating Mark Butler’s position” as he is Labor’s official spokesman. Unions ACT secretary Alexander White took objection to this, pointing out that Butler had been briefly quoted. But Butler stood his ground, saying the Herald shouldn’t be promoting an “alternative” Labor spokesperson on the issue. The Herald‘s response? “Perhaps you’d prefer a slice of Pravda?” Pravda (“Truth” in Russian) was the official newspaper of the Soviet Communist Party. So the Labor Herald is not Pravda. Got it. — Myriam Robin

News.com.au first, daylight second. News.com.au and The Sydney Morning Herald were last year neck-and-neck to be the most-viewed Australian website in the Nielsen rankings. But the latest June figures, released yesterday, show news.com.au absolutely blitzed the SMH, rising 10% since June to secure an audience of 4.11 million in July. 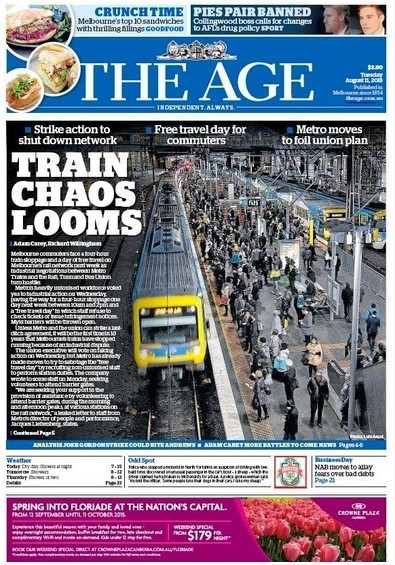 Face masks are big news, but for news.com.au they’re also a money spinner