The only gay in the village. It was confirmed over the weekend that the Greens will be running footballer Jason Ball as their candidate for the seat of Higgins, against Labor’s Carl Katter, brother of MP Bob Katter. While the Greens threw their support behind Ball, who promptly changed his social media handles to @greensjason, some in Labor found issue with the fact that the Greens had also selected a gay man to run in the electorate (Carl Katter is also gay). Luke Mansillo, who is close to Katter, tweeted yesterday: 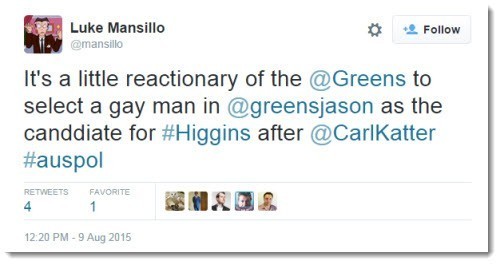 Carl Katter has long flagged that he’s interested in a political career, saying he wanted to run before the 2013 election after joining the party in late 2012. We hope that preselection won’t tame Katter’s honest Twitter presence, including this exchange with Freedom Commissioner Tim Wilson in 2013 that was later deleted (and caught by SameSame):

We were told back then that Katter had been in line to be preselected as the candidate for Prahran in last year’s state election, but that Twitter exchange had cost him the nomination, which ended up going to Neil Pharaoh. Obviously the tweets didn’t get in the way this time — but we hear that no one ran against Katter at all, so Labor didn’t really have another option.

There has to be a term for when a discussion has to turn to accusing one of it’s participants of using drugs.