We give our pollies an extraordinary amount of money in entitlements, writes economist and journalist Jason Murphy. Here's what else you could get for your money. 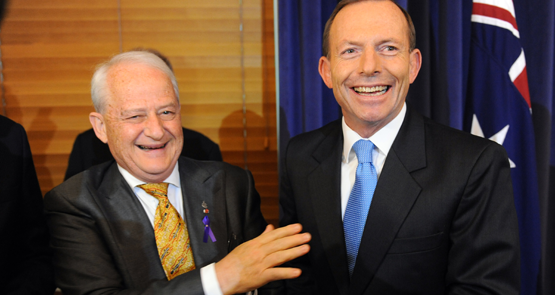 Politicians’ entitlements look extravagant in isolation — $12,000 for a trip to Uluru, $5000 for a trip to Geelong, etc — but it is not until you see the costs in aggregate that you get the sense this is more than a bit of frittering.

The federal Department of Finance administers the costs of our MPs. And the total figure is staggering.

Buried in the Portfolio Budget Statement is a full and frank confession of how much it costs to run our 150 representatives in the House of Reps and 76 in the Senate. 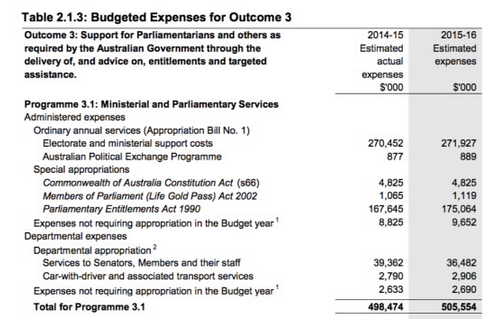 That $505.5 million represents a significant chunk of the federal budget.

More than enough to fund the new additions to the Pharmaceutical Benefits Scheme ($375 million in 2015-16); and more than the proposed saving from removing “double dipping” on paid parental leave in 2016-17 ($474 million.)

It works out at $2.24 million per elected representative. When you consider their base pay is $195,000 (more for ministers/shadow ministers), it suggests around 80% of MPs’ costs are non-salary.

Of course an MP needs an office, and of course they need to travel for work.

But we could pay every backbencher $200,000, give them all a budget of half a million dollars for office, travel and staff expenses, then pay 50 ministers and shadow ministers an additional $300,000, and come out at $173 million. That would be a third of the actual cost to taxpayers.

So what’s happening with that additional $330 million?

Some is no doubt important and worthy stuff like ensuring staff are paid on time and that occupational health and safety regulations are met.

But some is wilfully wasteful nonsense, like the so-called Life Gold Pass scheme, which grants retired MPs a number of free return flights and costs over $1 million per year. (Did you know parliamentarians who don’t qualify for the Life Gold Pass scheme have their own scheme to give them free flights, too? Nobody misses out!)

Another choice example is business-class travel for children. Taxpayers are on the hook for “three business class return trips to Canberra from the principal place of residence for each dependent child”. MPs are also eligible for funding for business-class flights from Sydney, even if they live within 150 kilometres of Canberra.

And let’s not get started on printing budgets. MPs are the best (and last) clients of Australia Post, when instead they should be thinking like modern media companies and building up their email lists. Opposition spokesperson for justice David Feeney managed to spend nearly $100,000 on printing in a year, for example.

These perks should be written out immediately.

A bigger, murkier problem that has emerged is the way politicians can charge the public for any old trip if they so much as check their email while they’re there.

Philip Ruddock, for example, bills us for his trips to far-north Queensland, where he keeps a beachfront apartment. I have no doubt he reads legislation while lying on those golden sands. But should we really pay for that?

It’s a grey area, sure. MPs don’t have a clear job description, and they genuinely should travel and meet real Australians. We don’t want to discourage them from getting outside the Canberra bubble.

But there’s a simple solution, one well established in law. We all do it in our tax returns: pro rata. That’s Latin for proportionately. And it would allow MPs to fairly allocate the costs of trips that blend business and pleasure.

When the taxman wants to know our mobile phone expenses, he asks us to divide them up pro rata. (Say, 40% work and 60% personal.)

It would not be rocket science for MPs to make similar judgements on their trips. If Tony Burke travels to see Robbie Williams in concert and then meets the promoter, then he can allocate a share of the cost to the taxpayer, but he must wear a share of it himself.

The introduction of a degree of personal responsibility for the costs of trips might well result in their number shrinking dramatically.

The YHA or Formule 1 isn’t good enough for them.

The “entitlement” binge has gone on for too long and has been pushed beyond all reasonable expectations of the public.
No wonder it was kept quiet (by both sides). The less the public know, the better,,, seems to be the way its been played over the years.
And now, hopefully, it may be cut back to a level accepted by the public, who, at least should want value for money.

If you are speaking at a 3-day conference in Cairo and then take a week-long cruise up the Nile, the tax office will only allow the conference fees and accommodation as deductible expenses. Even the return airfares are divided pro rata, for example $2,000 X 3/10 = $600 deductible. Naturally, the same pro rata principle should apply to Politicians and their expenses, it applies to the rest of us.

One thing not mentioned in all the discussion about politician’s travel is that all Federal Politicians, on election receive a mystery black box present from Qantas. In it is the highly coveted Black membership card to the Chairman’s Lounge, Qantas’s exclusive invitation-only lounge for “leaders of industry and business”. This keeps them away from the riff-raff (have you ever seen a Federal Pollie in Qantas Club?), a place where they can hang out with each other, meet film stars, sporting elite and industry bosses and general avoid rubbing shoulders with ‘real Australians’.

One thing not mentioned in all the discussion about politician’s travel is that Federal Politicians, on election receive a mystery black box present from Qantas. In it is the highly coveted Black membership card to the Chairman’s Lounge, Qantas’s exclusive invitation-only lounge for “leaders of industry and business”. This keeps them away from the riff-raff (have you ever seen a Federal Pollie in Qantas Club?), a place where they can hang out with each other, meet film stars, sporting elite and industry bosses and general avoid rubbing shoulders with ‘real Australians’.