Who exactly is Tony Smith? Crikey takes a close look through his past (and expenses) to acquaint ourselves with the new Speaker. 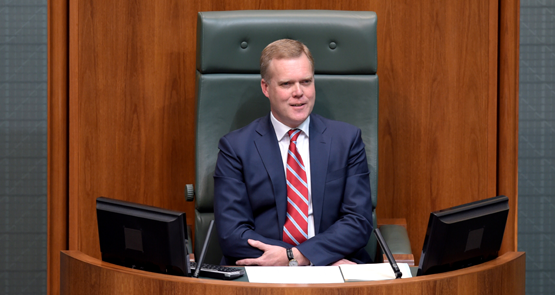 After Bronwyn Bishop’s controversial run (flight?), Parliament’s next Speaker had to have one defining quality: he or she had to be boring. In Tony Smith, the Coalition has found its man.

Smith, a former staffer for Peter Costello, elected to the Victorian seat of Casey in 2001, was today appointed unopposed as Speaker of  the House of Representatives after winning a ballot in the Liberal party room this morning against Russell Broadbent 51 votes to 22.

Smith received a standing ovation — although the member for Mackellar was noticeably grumpy — and unlike the election of Bishop faced as speaker, no alternative candidate put up by the Labor opposition.

Smith was the favourite to be the new Speaker after Bishop resigned in the wake of her travel expenses scandal because he is believed to be a “cleanskin”, without the kind of expense claims that got Bishop, Tony Burke, and others in trouble over the past few weeks.

We’re not expecting any chopper scandal for this new Speaker. Smith’s expenses reveal very little claimed travel outside of official sitting weeks, or sittings of the parliamentary committees in which he participated. He is a big supporter of the Carlton football club, and his declarations reveal he does sometimes attend the AFL, but always in his home state of Victoria.

During the Howard government, Smith rose to parliamentary secretary to the prime minister. In opposition between 2007 and 2013, he was opposition education spokesman for Brendan Nelson, shadow assistant treasurer for Malcolm Turnbull and finally opposition communications spokesman for Tony Abbott until after the 2010 election.

At the time the Coalition was dead opposed to Labor’s then$43 billion fibre-to-the-premises National Broadband Network, which was a response to the Howard government’s inaction on broadband and the ultimate response to Telstra’s failure to come to the table with a proposal for upgrading its network.

The problem for the Coalition, however, was that the NBN policy was a winner. A report into the 2010 election loss by the Coalition notes that a large factor in the party’s failure to win seats — in Tasmania especially — was on broadband policy, in Smith’s portfolio. The report noted:

“The failure to properly explain the Liberal Party’s broadband policy and the Labor Party’s effective scare campaign was a major cause of the party’s failure to win seats in Tasmania.”

“In the view of many, the party’s policy amounted to a threat to come into people’s homes and rip the internet out of the wall.”

It didn’t help that Smith, alongside then-opposition finance spokesman Andrew Robb, announced the Coalition’s policy in a sweaty, rushed press conference just six days out from the 2010 election, and a mere half an hour before a debate between Smith, then-communications minister Stephen Conroy and the Greens’ Scott Ludlam.

The policy was essentially to sell off what had been built so far, subsidise the rest, and let the market decide what broadband Australia should have.

It didn’t go down well with the public or the telecommunications industry. It also wasn’t helped by Abbott fronting 7.30 that night clearly not across the policy, and telling Kerry O’Brien: “I’m no Bill Gates here, and I don’t claim to be any kind of tech head in all of this.”

Independent MP Tony Windsor cited the National Broadband Network policy as the reason why he had decided to form a minority government with Labor, with his infamous “do it with fibre” speech.

After that, Smith was demoted to the parliamentary secretary to tax reform, while Turnbull was brought in to “demolish” the government on the NBN by essentially neutralising it as a winning policy for Labor.

“Who better to hold the government to account than Malcolm Turnbull, who has the technical and business expertise to entirely demolish the government [on broadband]?” Abbott said at the time.

Five years later, and Turnbull is heralding the achievements of the NBN rollout, which is only just now moving away from Labor’s fibre-to-the-premises model towards the “multi-technology mix” that will use the Telstra copper network, along with the Optus and Telstra pay TV cable networks.

At the time of the demotion, Abbott said Smith still had an important role to play, but speaking on Smith’s parliamentary career today, Abbott commented that never really came into fruition.

“You have met with some disappointments,” he said.

Smith is not the party political warrior that Bishop is, and he has said he will sit out of “regular” Liberal party room meetings.

All eyes will be on Smith during his first question time as Speaker tomorrow — there is no question time today, with condolence motions over the death of WA Liberal MP Don Randall instead. Labor will no doubt want to test the new Speaker’s resolve to be more balanced than his predecessor, who ejected Labor MPs more than 400 times during her tenure, while her total for Liberal MPs ejected remained in single digits.

“Serving as Speaker is a privilege, not a prize. A responsibility, not a reward,” Opposition Leader Bill Shorten said today.

“Today is a chance to lift the standards of this Parliament, to return them to a level which Australians rightly expect of their representatives. Mr Speaker, much of this challenge falls upon your shoulders. You can make this a place where straightforward questions get straightforward answers.

“Where the words ‘direct relevance’ carry real meaning. Where the Speaker manages debate, without seeking to participate in it. And where standing orders, including 94A, are applied fairly to both sides of the house.”

Smith’s work as the chair for the joint committee for electoral matters will likely give him some credentials now taking the Speaker role.

Incidentally, Crikey founder Stephen Mayne tells us that Smith, a keen Holden fan, once visited the Crikey bunker back in 2001 to see a Holden Monaro Mayne had for sale. Smith didn’t end up buying the car, but lamented to Mayne that the Howard government wasn’t getting much credit for lowering car prices with the introduction of the GST.

Josh,
Unless Tony Smith has deserted an underperforming team, he is a committed Carlton man. You could scarcely make a more outrageous accusation than to charge him with supporting Collingwood.

Peter, you can’t expect the Crikey Commissariat to focus when they can’t find a genuine reason to criticise the new Speaker.

The public’s view on the gutting of the NBN as a major infrastructure policy did not amount to constituents seeing it as “a threat to come into people’s homes and rip the internet out of the wall.”

And, therein lies one of the problems with the current political class in this country – too many believe that the public are just uninformed morons, who are incapable of understanding the implications of competing policies, and policy changes.

So, who will be the first Labor minister to try and associate Tony Smith with his ‘boofhead’ mate Eddie McGiure (over the Adam Goodes debacle) and get the boot? Please let it be Mr Champion that gets nicked…

Why was Windsor’s “do it with fibre” speech described as ‘infamous’?
Or did Josh think it is a synonym for ‘notorious’ (equally inappropriate)?
Perhaps ‘notable’ was the word the once-and-future-intern was seeking?