Nine has secured the NRL rights until 2022. Plus other media tidbits of the day.

A plague on their three houses. In The Age, Nicholas Reece has a “death of politics” article, with the usual “they’re all to blame” calumny heaped on Liberals, Labor and … the Greens. The accusations against the first two are standard, but the Greens are a young party with a huge membership relative to their vote, high levels of confidence from the voters, and net positive ratings for their new leadership (whereas Shorten and Abbott are both trailing “someone else” and “don’t know” in the preferred leader stakes). What’s the charge? “The Greens’ system is steeped in more mystery than the selection of the Pope.” And apparently, they have party conferences with — gasp — closed debates.

Well, the party leader is chosen by the parliamentary party — the best way for a party to do it if there is a relationship of confidence between party and supporters. And conferences closed to all but members means that the debates can be real, not factional stitch-ups with Potemkin openness. Why on Earth did Reece lump the Greens in with two old and creaking parties? Answer at the end: “Nicholas Reece … is a former Victorian secretary of the Labor Party.” Ah, it’s a free kick to Labor, on The Age‘s op-ed real estate. Well done. — Guy Rundle

Fact-checking Q&A. Guests on the ABC’s Q&A are advised to be careful what they pronounce, with The Conversation today promising to fact-check at least one claim made on Q&A every week, with Aunty’s blessing.

“Q&A has agreed to encourage viewers to refer any claims of fact they feel need checking to The Conversation,” the website announced this morning.

“The Conversation’s FactCheck is an independent double check process. The challenged statement is first checked by an academic specialist with deep subject expertise and the finding sent for ‘blind review’ by a second topic specialist. The second reviewer doesn’t know the identity of the first, allowing for unbiased scrutiny.”

The ABC has its own fact-checking unit, but perhaps it’s just as well it’s using The Conversation’s instead. It could get awkward if the ABC started to critique its own guests.

Last month, the ABC apologised for a claim made by broadcaster Alan Jones on Q&A, after The Conversation said it was false. Jones did not dispute the correction, which centred around how much it cost to produce a kilowatt hour of electricity through wind power compared to coal. — Myriam Robin

Blame games and suppression orders. In Saturday’s Courier-Mail, Des Houghton took Alan Jones and The Australian‘s Nick Cater, along with Channel Nine’s 60 minutes, to task over their coverage of the 2011 Queensland floods, which, Houghton writes, turned the tragedy into “a nasty blame game”. And in the Saturday Paper, Richard Ackland takes on the absurdity of suppression orders, including a recent one that asked publishers to remove 1,800 stories about Eddie Obeid at ICAC.

Nine gets a try. In a surprise announcement this morning, the Nine Network has retained the free-to-air rights for the NRL for the 2018 to 2022 seasons in a deal it says will cost it $185 million a year, or $925 million, subject to finalising the pay TV deal and any simulcasting of games on both free-to-air and pay TV.

News of Nine’s deal (the NRL said it had concentrated on the free-to-air part of the broadcast deal first) means the Ten Network and Foxtel have been shut out of the free-to-air part of the deal. So far as we know, it is the second time Ten has missed out on free-to-air rights for the NRL. Fox Sports teamed up with Nine to bid and retain the present contract, much to the annoyance of Lachlan Murdoch, who had wanted Fox Sports to team with Ten. He blamed Kim Williams for that, and that contributed to his ousting from the CEO’s role at News two years ago.

Nine network’s owner, Nine Entertainment Co, told the ASX this morning the number of games covered will rise to four from the three in the current contract. These will be on Thursday, Friday, Saturday nights and Sunday afternoon. On top of this the NRL finals series, State of Origin and other special event matches are included. The NRL though will have the right to award simulcast rights to pay TV for these games (like the AFL at the moment with Seven having four games a week, but sharing simulcast rights with Foxtel/Fox Sports). All four Nine games will be live, instead of two at the moment (Friday night’s first game and Sunday afternoon). As part of the new deal, a new State of Origin schedule will be introduced with the second match in each series being played on a Sunday night as part of a weekend of representative football alone and no club games.

If that simulcasting happens, the cost of each game will be reduced. Nine didn’t say as much, but it is likely the $185 million annual cost will fall because of Foxtel. Fox Sports will want to show as many games as possible, especially on a Saturday night which had been its monopoly night. Now that will be shared with Nine, a move that will cost the pay TV company viewers.

Nine has also acquired all free streaming rights for its four games. No word on the pay TV rights or the digital/online rights, which Telstra holds at the moment. — Glenn Dyer

Field & Stream outsells Playboy. Celebrity magazines, some women’s publications, and Playboy are on the nose so far as US magazine buyers are concerned, judging by the June half-year circulation figures from the Alliance for Audited Media on Friday. Total circulations of US magazines fell 2.2% in the six months to June from the first half of 2014 (when they fell 1.9%). But the figures also show food recipes are very popular.

A standout loser was Time magazine, whose total circulation fell 7.6% to 3 million copies.

Turning to the good news, circulation for Meredith’s new Allrecipes magazine soared 70.6% to 1.1 million., with single-copy sales up 9% to just 56,183 and subs up 75.8%. It is an extension of its website of the same name and is published six times a year by Meredith. It launched early in 2014, hence the surge in sales. (Meredith last years ago closed the venerable Ladies’ Home Journal after 131 years of publication). Food Network Magazine’s (it’s part of the Scripps media group) circulation jumped 6.3% to 1.73 million copies. — Glenn Dyer

Front pages of the day. In Ferguson, Missouri, one year on from Michael Brown’s death … 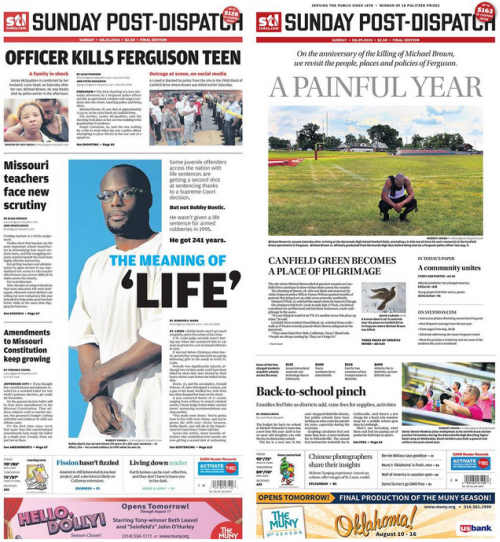 Oh dear Guy did Nicholas Reece touch a sensitive spot? Never mind that a former Labor staffer gave both Parties a real kicking he had the temerity to include your precious Greens. The reality is that all Parties have to adopt transparency and openess to recover any vestige of credibility.

The Greens processes on preselection of candidates and policy development are entirely transparent to members such as myself, and are highly democratic. Furthermore the Greens publicly publish all policies once they are decided and also publish details on donations well beyond the rather lax requirements dictated by law. I think Guy is right and see no reason why criticism on their transparency is warranted. Everything that counts is in the open, the problem is that too many so called political journalists are more like gossip columnists and are more interested in political infighting than actual issues.

Thanks for pointing out that Nicholas Reece’s attempt to show that the Greens are “just like the other two Parties” was ludicrous and partisan. What’s wrong with members actually having closed debates – if people wish to know what is being said – join the Party.
Clearly the issues surrounding the old Parties concerning the influence of donations etc are far more important and damaging. Greens are the only Party who are not subject to the influence of these big donors and therefore make policy decisions which are evidence based. Also, members get to actually vote on policy.

“Well, the party leader is chosen by the parliamentary party — the best way for a party to do it if there is a relationship of confidence between party and supporters.”

If??? Yeah, ‘it seems to work alright so far’ isn’t really a strong defense.
Also, what makes you certain MP’s are going to make a better choice than a vote of all party members?

“Why on Earth did Reece lump the Greens in with two old and creaking parties?”

He paid attention to them during the last few years?

How a private club, which is what political parties are – they have no Constitutional styanding and, on some readings, could be argued to be prohibitted in the august documents from influencing MP – conducts its internal matters is entirely a… private matter.
What counts is what is put before the public as “This We Believe” at election time.
As for the apparatcchiks of the SussexSt Lubyanka and whatever grim, dim hole is the tory equivalent (HoltSt/IPA?)it is almost the opposite, what they proclaim is rarely adhered to once arses are planted on that soft green leather.