Is Wayne Swan on the way out? ... Labor-Greens Twitter spat ... did Adani kill the Carmichael mine months ago? ...

Calls for the Swan song continue. There is a fair amount of noise around former treasurer and deputy prime minister Wayne Swan’s seat of Lilley. Although Swan has said he will renominate for the next federal election, a Labor strategist and friend of Swan, Cameron Milner, has called for Swan to step down and mentioned former party organiser Anika Wells could be a potential contender.

A tipster tell us that Wells has moved to the Lilley electorate in a house in Chermside and that although she turns up to branch events, she “doesn’t seem to actually volunteer” to help the sitting member at the events.

The tipster reckons that if Swan decides to gracefully retire, it is likely that a woman from the right of the party will replace him, and it will come down to Wells or Milner’s wife, Lauren Milner. Our tipster says the smart money is on Lauren Milner, given her extensive work in the electorate and for Swan.

PM on the outs in the gallery? Fairfax’s Peter Hartcher is by far not the only senior press gallery journalist to question Abbott’s prime ministership of late, this week saying the government had lost its appetite for reform, rendering Abbott a “pointless prime minister”. But a press gallery insider suggested Hartcher’s relationship with Abbott soured in late 2013 when the Prime Minister stopped returning Hartcher’s calls. Hartcher told Crikey it would not affect his journalistic judgement, but declined to discuss his relationships or sources.

“It’s the journalistic equivalent of sources and methods for the intelligence world — sacrosanct,” The Sydney Morning Herald‘s political and international editor said.

“I will add only that I don’t make journalistic judgments of governments or oppositions based on my personal relationships.”

Greens in the hot seat. Victorian Greens MP Ellen Sandell copped a lot of flak yesterday, particularly from Labor Party members, over an image of the Aboriginal flag she posted with the Greens logo superimposed over it. 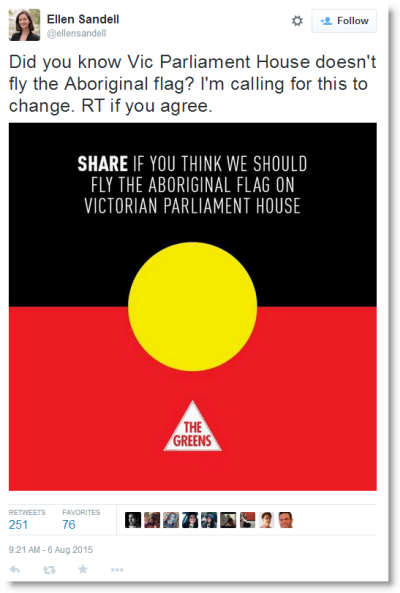 It was a bad move, but she’s hardly the first politician to do it. Others pointed out that the Australian Labor Party’s Facebook page had a similar image with its logo on it in early July. It appears it has now been taken down. 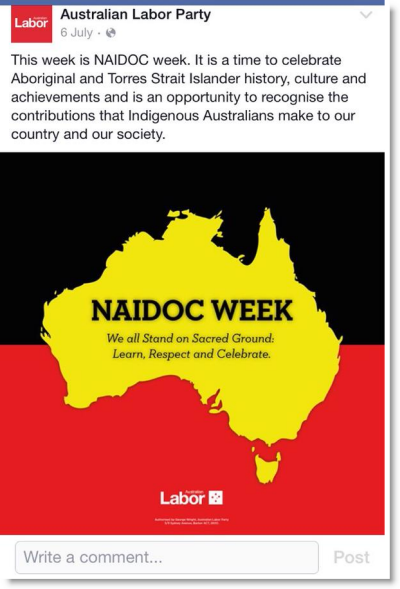 Helpfully, opposition immigration spokesman Richard Marles also tweeted the image, and has yet to delete this tweet. 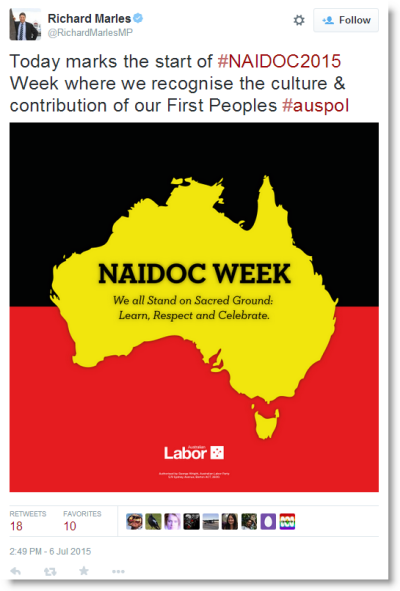 Maybe before condemning your political opponents, a little Twitter history search is in order?

“I was at a dinner in Brisbane last night talking with the senior lawyer for Adani who said that Adani had decided to pull out [of the Carmichael mine project] months ago for purely economic reasons and he can’t understand what the hell everyone is going on about . All that stuff about them begging the Commonwealth Bank for the funds is a distortion too. Adani just doesn’t want to go ahead.  Is it an attempt to lay the blame at the feet of environmentalists? The news has been bleating on about ten  thousand lost jobs all over a finch and a snake.  I smell a rat!”

A spokesperson for Adani told Crikey it had terminated the relationship with the Commonwealth Bank over concerns about ongoing delays to the five-years-long approval process and denied it was seeking to exit the project:

“In the event the Commonwealth approvals framework is not further undermined by activists seeking to exploit legal loopholes, enabling the project and the thousands of jobs and billions of dollars of investment it would bring to be delivered, Adani would happily work with the bank in future.”

Abbott caught out peddling jobs lie. In full “coal is the future of humanity” mode yesterday, Tony Abbott railed at environment groups that had stymied the Carmicheal coal mine project (not Department of Environment bureaucrats who had screwed up the Environment Protection and Biodiversity Act process for granting approval for it).

“It will create about 10,000 well-paid jobs,” Abbott said about the unviable project, which is likely to be nixed by Adani, in comments dutifully carried on the front page of The Australian (a journal proudly powered by coal-fired electricity only).

Except, the 10,000 jobs claim is a well-known lie. Earlier this year the company’s own expert witness admitted in court the project would only create 1464 jobs. Where does the 10,000 figure come from? Well, that’s the nebulous “indirect” estimate of number of jobs the project would create elsewhere through, for example, construction of the rail line necessary to haul all that carbon to a port. Except, even by the estimate of the Queensland mining lobby group the Queensland Resources Council, the rail line would only create 2400 temporary jobs. That still leaves another 6000-odd jobs that exist only in the prime ministerial imagination.

Ross Cameron’s late-night Middle East peacemaking. Tweeting late on a Saturday night is a dangerous move for most people, but former Liberal MP and Sky News commentator Ross Cameron seems to have a talent for sitting down on a Saturday night to sort out the Middle East. This treasure trove of tweets from Cameron were uncovered by Ed Butler yesterday, and they certainly deliver. 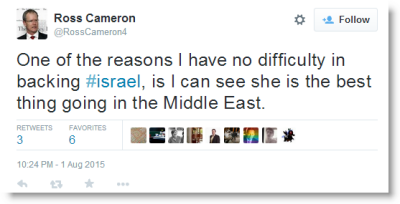 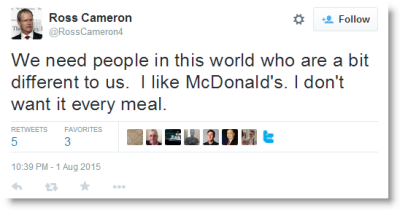 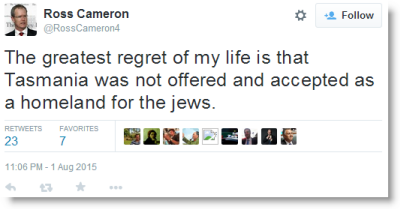 The tweets ran from 10pm until just past 2am. According to News Corp columnist Samantha Maiden, this isn’t a case of in vino veritas, however. Cameron is always like this. 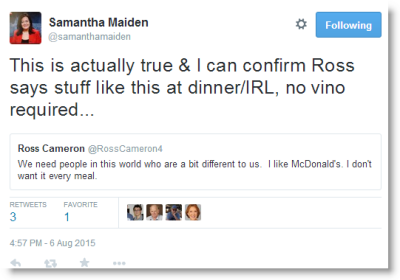 Oh well, what’s one more?
What’s that saying about “repeating a lie often enough”, even Limited News is helping, repeating it to “often enough” proportions?

I would have thought Ross Cameron’s “greatest regret” was cheating on his pregnant wife.

Apart from the sheer stupidity of the tweets the logic is just as bad. E G “We need people who are different TO us”

This is impossible. They can only be different FROM us

The Labor Party might benefit from choosing candidates with potential from the community rather than more party hacks. The community is fed up with seats being handed to union and party warriors (ALP) and political staffers (Libs).