Donald Trump has dominated the Republican debate, full of bluster and brio. He'll be back in September. 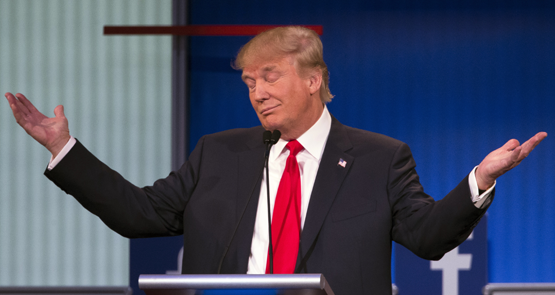 The Donald has dominated the first Republican nominees debate, currently winding up as I write. With 10 candidates in the main debate, Trump, polling highest, was placed at the centre podium. Everyone expected a show, and the Donald did not disappoint, when the first question came out: a raise-your-hands moment in which the candidates were asked to indicate whether they would rule out an independent third-party challenge should they not be chosen as the GOP candidate.

And the Donald raised his hand, indicating he would consider such a challenge, to small applause. And mass booing. He shrugged and smiled, and said, “Well, if I’m the nominee, I won’t run a third-party challenge …” And so it went. A debate between 10 candidates for the candidacy for one of the two parties running to lead the largest economy and nuclear arsenal in the world began with the lead candidate saying he might run against it.

Hard to top that, but the Donald gave it a go, and a few of the other candidates went hammer and tongs as well. A stand-out was a ding-dong battle between New Jersey Governor Chris Christie and libertarian Senator Rand Paul over metadata collection and the NSA, with Paul blasting Christie for “hugging Obama and now you want to hug him again [as he collects information on us]”, to which Christie replied, “you know, the only hugs that matter are the ones I shared with the relatives of 9/11 victims”.

Choice, but it was Trump who had all the brio, telling the questioners after a round of questions on immigration that “you wouldn’t be talking about this if it wasn’t for me”. “I want to build a big wall. Sure, you can put a beautiful door in the middle of it, but we’ve got to build the wall.” The response helped him recover — almost — from a snarling response to moderator Megyn Kelly, who asked him about calling women “pigs”. “Only Rosie O’Donnell,” Trump shot back, before adding: “I’ve been nice to you, Megyn, even though I don’t have to be.”

With 10 candidates on offer, the questions skidded around without finding much of a focus. Scott Walker, Wisconsin Governor, cupped his hands as if cradling an infant while he talked of putting in a law criminalising all abortion. Mike Huckabee, going around again after a storming 2008 run, wanted to use the Fifth and 14th amendments to raid abortion clinics. On Islamic State and the terror threat, Rand Paul suggested that the US should stop supplying them with arms via porous allies, while Ben Carson, the now-celebrity neurosurgeon, defended waterboarding and denounced “politically correct wars”.

Relatively more rational discussion of the economy were left to the centrist figures such as Jeb Bush (the second runner), Ohio Governor John Kasich and Joisey boss Chris Christie (both running close to 2% support, and only just making the cut). Kasich went to the left, defending his decision to accept Obamacare Medicaid funding, to get the mentally ill out of prison and to use the state to improve people’s lives, a breathtakingly risky strategy in the circumstances.

At the other extreme, nativist conservative Ted Cruz was explicitly running against his own party, saying that the GOP leadership had prevented him from introducing a law that would mandate five years in prison for any already deported illegal immigrant picked up a second time.

Of the other candidates, Marco Rubio failed to find a distinctive pitch and image, and Carson appeared to be dealt out of the questioning, going nearly 30 minutes without a question while others got two or three. In a way it was a kindness: his answers were waffly and amateurishness. But it was a terrible look for Fox News in their treatment of the only African-American candidate.

In the “undercard” debate held four hours earlier with the seven candidates polling less than 2% — ! — the stand-out by common agreement was former Hewlett-Packard CEO Carly Fiorina, who launched forceful broadsides against progressivism, with Bobby Jindal and Lindsey Graham unimpressive, and Rick Santorum — leader for a month or two in ’12 despite his significant Google problem — suggesting time-limiting receipt of food stamps and Medicaid.

With the second debate due to be held on September 16, the race is on for some of the seven dwarves to get into the main debate. The likely dropouts from the lead debate will be Rubio, Kasich or Christie. Carson deserves to drop out, but he retains a following due to his rise-from-poverty story, and will survive. Kasich gave an impassioned defence of gay marriage, which got cheers in the auditorium, but may finish him in the primaries. If he could make it through, by some miracle, the GOP would be right back in the game.

And as we go to press, the debate runs on — and the question is to the Donald. “You supported Hillary Clinton, assault weapons bans, you supported abortion … when did you become a Republican?”

Cheers. Trump: “I don’t think they like me very much.” Maybe not there, but he’s polling 25%. He’ll be back at the centre podium in September. He won’t be going away — until February, when he starts his own party.

Fifteen months of winnowing to go – will “Donald Duck” still be there?

The onlything better than a Donald GOP nomination would be if he chooses Palin as jis Veep candidate.

That guarantees a Democrat win and a far less incompetent administration

I’m thinking the opposite Pav.

If Trump doesn’t won the nomination, he will run as an independent and thereby steal the votes the GOP otherwise would have gotten, guaranteeing a Republican win.

Working backwards, Trump might have to get the nod as nominee for the GOP to have any chance at all.

Think i’ll start betting on a Trump win: being ridiculous is less of a liability than being even slightly realistic for elected leaders of societies in denial about their decline.