The Abbott government and its supporters are doing Daesh's work for it in creating a culture of fear. Wonder why that might be ... Jeremy Hillman, former adviser to Julia Gillard and Kevin Rudd, explains. 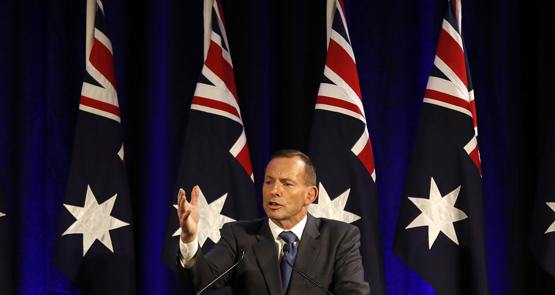 Phobia, or irrational fear, is an unfortunate hallmark of social and political discourse throughout the world, often exploited for gain by those who have a responsibility to do exactly the opposite. Rampant homophobia is used to stoke fears that gay people were sexual deviants out to destroy our way of life. Now rampant Islamophobia advances a fear of Muslims as terrorists who are out to destroy our way of life. And the government is driving a lot of it.

Although the Prime Minister has admitted he feels threatened by homosexuality, these days neither he nor his government would dare to publicly suggest that the gays are coming to get us (even if some still feel that way in private). Furthermore, if a public figure does spout any homophobic bile — think Liberal Senator Cory Bernardi and bestiality — they are rightly howled down by a cacophony of voices of reason and decency.

But with few notable exceptions, Islamophobia in the public domain is running rampant and is largely unchallenged. Back in 2011, a 10-year study on Australian attitudes to other cultures found almost half the population to have anti-Muslim sentiment. Undoubtedly this number is even higher in 2015.

Our entrepreneurs of fear — certain public figures and media outlets — are irresponsibly riding this wave, content in the knowledge that such fear is useful to their cause and likely to result in political and ratings gains. In opposition, Scott Morrison urged his fellow cabinet to better exploit growing community concern about Muslims in Australia. In government this has clearly been embraced, with an unrelenting focus on terrorism and border protection, and even a parliamentary inquiry into halal certification.

Islamophobia appears to be a general fear of Muslims synthesised with our fear of terrorism, and compounded by our general inability to distinguish radical extremists from ordinary Muslims.

Despite the likelihood of being harmed by terrorism being negligible, the fear created by terrorism has huge and enduring effects on human behavior and hampers our ability to assess risk objectively.

Exploiting such fear in politics is as old as politics itself, and is a tactic that all sides of the spectrum frequently deploy. Afraid of losing your job? Vote for X. Afraid of catastrophic climate change? Vote for Y. Afraid of asylum seekers? Vote for Z.  So much of our political narrative is based on nurturing people’s fears and then offering a “solution” to them, and it persists because it works.

But when these fears are deliberately stoked and grossly exaggerated, it takes us from fear to phobia and further distorts reasonable thought, action and debate. All too often it also leads to the formation and growth of groups such as One Nation, the Q Society and Reclaim Australia.

The real winner is Daesh. Since our media aren’t exactly there on the ground, nearly all the footage is propaganda — written, directed and produced by the terror group. Naturally they supply us with images that show them looking more powerful, organised and respectable than they really are.

Terrorism aims to instil fear, and when we overtly promote that fear, we are aiding the cause. What does Daesh want most after it has conquered and subdued? Ongoing legitimacy, power and attention.

Excessive media coverage of Daesh might not directly encourage terrorism but at the very least it legitimises, promotes and strengthens such groups, and we should debate the security ramifications of this more openly.

By broadcasting their propaganda, we freely give Daesh more power and fuel Islamophobic sentiment. We forget Muslims in the Middle East are the overwhelming victims of Daesh terror while Muslims in Australia are indirect victims, frequently deemed guilty by association. We increasingly fear and blame Muslims in equal measure and are encouraged to do so by the entrepreneurs of fear.

There are no easy solutions, but it’s clear we need more “entrepreneurs of calm” to countenance the fear merchants and inject some context and sensibility into the discourse. Malcolm Turnbull briefly tried to be one such voice, cautioning overreactions to the fear of terror or Muslims. Undoubtedly he will be increasingly silenced as the federal government gears up for the mother of all fear campaigns leading into the next election.

Islamophobia feeds into our worst instincts and needs to be courageously opposed, not elevated further in the public domain. When prejudiced views are articulated by those in high office, they gain a degree of social currency and legitimacy that perpetuates them further.

John Howard wanted us to be alert but not alarmed while Tony Abbott wants us to be in a permanent state of alarm. He knows it’s his best, and perhaps only, chance of being re-elected.

Like the activists who challenged the prevailing culture of homophobia, we need to confront the prejudice and phobias of those around us and those entrepreneurs of fear who stoke them.

I made a couple of posts on the Facebook page of the anti mosque people in Bendigo yesterday. They really are fun to troll, they dont like it up em.

Since his Ship Building announcement has sunk without trace and therefore failed in its real purpose. Distraction of his govt’s endless and continual failings and incompetence.

We can expect a new terror threat soon as the tried and true weapon of mass distraction with the supine media failing to call it out for what it is.

The only thing I’ll be missing is that Sportsbet haven’t started a book on it.

Like the activists who challenged the prevailing culture of homophobia, we need to confront the prejudice and phobias of those around us and those entrepreneurs of fear who stoke them.

Some development on #I’llRideWithYou may be needed? Probably #I’llRideRoughshodOverTonyAbbott is not a good idea (Cory Bernadi would become even more unhinged)

“Our entrepreneurs of fear…” Yup!Sadly quite successful so far.
Apologies in advance for any attribution I may forget to make for that phrase… ‘cos… it’s being added to my lexicon.