Channel Seven has pushed ahead with plans to sue Channel Nine over new show The Hotplate, which it says bears a great similarity to its own flagship My Kitchen Rules. Plus other media tidbits of the day.

Get your own format. Channel Seven has pushed ahead with plans to sue Channel Nine over new show The Hotplate, which it says bears a great similarity to its own flagship My Kitchen Rules.

The network suffered a setback yesterday when a judge declined to impose an injunction against the high-rating Nine show.

In a statement yesterday, Seven said it was important for it to protect its intellectual copyright not only in Australia but globally, where it has licensed the MKR format:

“My Kitchen Rules is the number one show in Australia. It is also broadcast in 162 countries. There are local versions of MKR being produced under license in seven international markets very successfully, including Canada, Lithuania, UK, Serbia, New Zealand, Belguim and Denmark.”

Seven has asked for an urgent hearing on the matter. As Helen Razer wrote in Crikey earlier this week, even if The Hotplate is a rip-off, it’s very difficult to sue for breach of copyright over such issues. — Myriam Robin

Seven and Ten reject anti-gay marriage ads. The Marriage Alliance, a new self-described group of “individuals, businesses and community organisations” — which is made up of people who all seem to have close ties to the Liberal Party — has launched a set of ads on radio and TV this week aimed at explaining the “unintended consequences” of legalising same-sex marriage, with Parliament expected to debate the issue in the next fortnight.

The move is obviously aimed at putting pressure on the Coalition to not allow a conscience vote for MPs and senators. While Nine and Sky are believed to have aired the ad, the group is claiming it is being silenced by Seven and Ten.

Although it is a commercial decision for the networks, the group, and the similarly focused Australian Christian Lobby, have complained of being “silenced” by the media.

“It is quite shocking that two major TV networks are denying the basic right to freedom of speech and expression on an issue that supports the current law of the nation,” Sophie York, the Marriage Alliance spokesperson, who has previously run as a Liberal candidate, reportedly said. — Josh Taylor

Times cracks 1 million. It’s been reached — The New York Times says it cracked the million digital subscriber mark last week, the first newspaper anywhere to reach that level. The company said in its second-quarter earnings report overnight that paid digital subscriptions reached 990,000 at the end of the June quarter, up 19% (33,000) from a year earlier, thanks to improved customer retention improved and more international subscribers.

The company said it surpassed the 1 million digital subscribers last week, at the end of July. It added that this was a digital-only figure and was on top of its 1.1 million print-and-digital subscribers. The 33,000 new digital-only subscribers in the quarter was the highest for the last three June quarters. The company reported a rise in profit, despite a sharp fall in print ads, thanks to cost cutting and continuing growth in digital revenues. In the latest quarter, advertising revenue fell 5.5% to US$148.6 million, led by a 12.8% drop in print advertising, from US$157.2 million to US$148.6 million. Display ad revenue fell 4% to US$135.5 million, while classifieds were down 16.3% to just US$8.3 million.

But circulation revenue edged up 0.9% to US$11.7 million, thanks to the digital subscription push and an increase in home-delivery prices offset a another fall in print copies sold. Both digital subscription revenue and digital advertising sales grew 14% in the quarter, helped by mobile, paid posts (so-called native advertising) and video. Digital ad revenues rose from $US42.3 million to $US48.3 million. Digital ad revenues made up 32.5% of the company’s total ad business in the second quarter of 2015, up from 26.9% in the second quarter of 2014.

Netflix flicks Fox. It’s been a rotten two days for the media empire of the Murdoch clan — its key company, 21st Century Fox, has lost billions of dollars in market value as nervous investors have singled it out as a major casualty of the growing trend by US TV viewers to abandon cable TV, either wholly or in part, and move to streaming video and other online viewing options. For the second day in a row, US cable TV stocks were sold down — many by smaller amounts than in the great Wednesday bloodbath, when tens of billions of dollars were wiped from sharemarket values.

But for a second day, the Murdoch clan’s 21st Century Fox was a prime focus for investor unease, and was joined in their market’s scross hairs by its stablemate, News Corp. Both stocks hit all-time post-split (June 2013) lows during trading and ended on all time closing lows. The Murdoch clan’s fortunes fell by more than US$1 billion, thanks to the falls in the prices of both companies’ shares. It’s proving to be a brutal introduction to the big time on Wall Street and in global media for the glimmer twins — Lachlan and James Murdoch, respectively co-executive chair of Fox and CEO of Fox. Their upbeat post results briefing Wednesday evening (New York time) fell on deaf ears among investors, and failed to stop the rot yesterday.

But the most telling market movement was not among the established media giants. It was the cause of much of the market angst, Netflix, the rapidly growing streaming video giant, which had its shares hit new highs and its value cracked the US$50 billion mark, closing a touch under US$53 billion. At that level Netflix is around US$7 billion short of the value of Fox (US$59.8 billion) which lost another 6.74%, on top of the 6%-plus fall the day before. Fox is approaching bear territory, as investors take a real set against the key company in the Murdoch empire. The company has lost more than US$8 billion in market value in the past two days as investors see it as being exposed to the cord-cutting by pay-TV subscribers. Other cable groups, such as AMC Networks, ESPN, Comcast, Sinclair Broadcast Group and CBS were also down. — Glenn Dyer 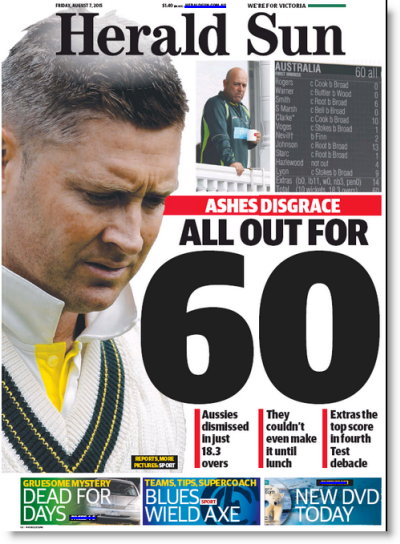 Who writes Crikey’s headlines? The media segment headline written by someone who can’t spell “channel”?

The NYT digital subscriptions numbers are presumably helped by the fact it is quite difficult for international subscribers to cancel a subscription. The help page suggests phoning a US telephone number, with no indication of a digital method. Buried in the terms and conditions is an email address to contact, but doing so bore no fruit and garnered no response for me. Would not be surprised if a fair few of those one million are international subscribers who gave up on cancelling.