ABC moves Q&A to news because it wanted to, not because the PM said so

Tony Abbott asked the ABC to move Q&A to its news and current affairs division. It has now done so, but perhaps not because of the PM's letter. 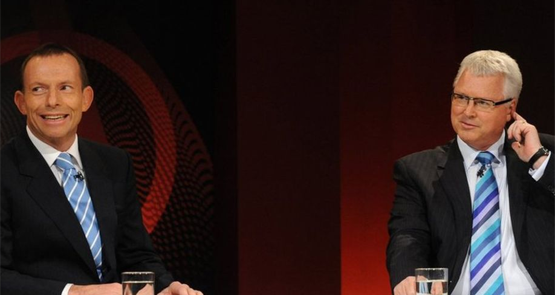 The ABC board has voted to move late-night panel show Q&A from the ABC’s television to its news and current affairs division. Was it because of a letter from the Prime Minister to its chairman demanding, more or less, that? The answer depends on who you ask.

In early July, Tony Abbott wrote to ABC chairman Jim Spigelman saying a government-imposed boycott of frontbenchers appearing on the program would be lifted once Q&A was moved to the news division. The boycott was put in place after one-time extremist and loose-cannon Zaky Mallah was allowed to ask a question of a government minister live on air.

At yesterday’s all-day board meeting, the decision to move Q&A was not contentious. No board member spoke in opposition, with the topic taking up only a brief amount of time.

Whether or not this move constitutes a cave-in to the government is a fiercely contested notion. Many critics, like former Media Watch executive producer David Salter in Crikey yesterday, say the move constitutes a woeful precedent that will leave the ABC vulnerable to further editorial interference from governments in the future. Prime Minister Tony Abbott himself seems to view the decision as a response to his letter.

“I’m pleased that they’ve accepted what the government sought. I’m pleased they finally agreed to do that,” he said. “That’s exactly what I was calling for, and at least we’ve had some common sense after the notorious Q&A program,” Abbott said. “I’m looking forward to Coalition frontbenchers appearing on Q&A.” Asked whether he was unhappy the ABC was taking so long to do what he had asked, Abbott said he didn’t want to talk about the “length of time decisions might take”. “I’d rather give the ABC a bit of a pat on the back today — a bit of a pat for doing the right thing.”

But the view held within high levels of the ABC is that the board was not motivated by Abbott’s letter, which urged an immediate move (Abbott’s letter to Spigelman said: “Front benchers look forward to resuming their participation on Q&A once this move takes place”). Many board members at the meeting were very angry about the letter, which they viewed as an attempt at editorial interference. Additionally, Communications Minister Malcolm Turnbull has long called on the ABC board to take a more robust approach to ABC editorial matters. But the proposal to move Q&A to the news division was presented to the board by ABC management. The board hinted at this in its statement yesterday, which read in part:

“The Board was briefed separately by management on the editorial processes surrounding the program. Based on the information provided, the Board considers both the program and the wider ABC would benefit by an orderly shift of Q&A into the ABC News Division.”

The decision followed discussions between Q&A staff and ABC managing director Mark Scott about moving Q&A to the news and current affairs division. Crikey is told opinions within Q&A‘s staff about whether the program should be moved are mixed. In ABC management’s view, the main benefit of moving the program is that it would put the program under the editorial oversight of people more used to assessing risk in news programming. It’s worth noting that all ABC content is subject to the public broadcasting code of practice, and to the same standards of accuracy and fairness, regardless of what division they are housed in.

What the move would mean in practical terms is not yet clear — Salter has suggested it could mean Q&A would have to be recorded (as much of the news and current affairs’ flagship programs are), and an end to the opinionated live tweets that appear below speakers. An ABC spokesman declined to comment on specifics this morning. Asked why the ABC needed to give itself nearly six months to complete the move, the spokesman said: “It’s highly unusual for the ABC to shift a show within divisions while the production run is underway.” The statement hinted at administrative reasons for the delay, citing “accommodation, scheduling, staffing and other factors”.

The ABC is keen to have frontbenchers resume their appearances on the program, and has already secured Assistant Treasurer Josh Frydenberg for Monday’s show, despite the program traditionally struggling to book in frontbenchers during parliamentary sitting weeks. What effect this will have on ratings remains to be seen — as The Australian noted today, the minister-free versions of the program in recent weeks have rated very well.

Pretty weak. What next is the question?

Seem that no one thought of the third option.

Split News and Caff into a News division, ie reportage, hard news, and a Caff and Opinion Division, both under a head honcho of public information.

Outcome: Abbott get a way out and ABC doesn’t look like its has capitulated. How much are we paying these guys?

Let’s see TA first up on Q&A.How many would watch till the end .
Q&A has improved no end of late.No shouting down the women.No ignorant and disrespectful government spokespersons who don’t bother to find out who their fellow panellists are.

And being News, they can only deal in facts and truth, not spin and lies. I guess we won’t be seeing Abbott on Q&A again?

How much better QandA is without politicians, esp NLP ones. No parrotting of three word slogans, pink batts and party lines.
Shame they will be back on.