Abbott labouring in his own valley of death

Finally free of the Bronwyn Bishop saga, the Abbott government still appeared listless and without purpose this week. 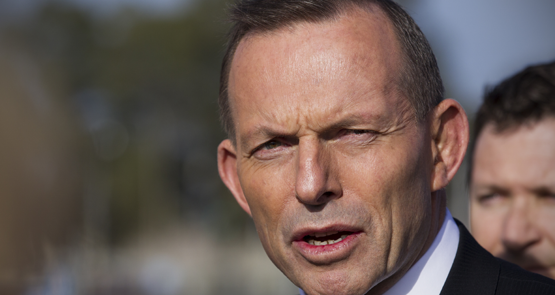 After weeks of Bronwyn Bishop’s political deathwatch, the former speaker’s demise last Sunday finally gave the government that precious commodity of clear political air to try to re-establish some control of the agenda. First order of business was the announcement about $20 billion worth of frigates in Adelaide, in a continuous build program stretching over decades.

That works out at just over $6 billion per seat the Coalition wants to save in South Australia, or about $60,000 per voter, the kind of subsidy that puts our former largesse to the automotive industry to shame. The government once made a virtue of attacking such largesse, before discovering its political cost. Having once enthusiastically chased foreign manufacturers out of the country, the government is now enthusiastic about building things in Australia. “We have confidence that we have the workforce, we have the technology, we have the commitment, we have the capacity to do this,” the Prime Minister said about the frigate build. As Labor quickly pointed out, that prompts the question of why the government doesn’t have a similar view about our capacity to build submarines.

The announcement included the bringing forward of offshore patrol boat and frigate construction to 2020 and 2018 respectively to minimise the “valley of death” between the end of the current air warfare destroyer project and the new construction projects. The air warfare destroyer project, commenced at the end of the Howard government, has been bedevilled by significant delays and cost blow-outs that again illustrate the problems Australia has with undertaking big defence construction projects (and why the government is right to be looking offshore for submarines rather than risking a repeat of the Collins-class debacle).

But having taken the threshold decision to build the boats here, a continuous build program might at least provide the sort of continuity of work that will build capacity to deliver projects on time and on budget. Nonetheless, the overall government message is either “we believe in a local defence construction industry but not for submarines” or “the age of entitlement is over but we’re gonna build these boats at a higher cost locally anyway”.

Back in May, as the nature of Abbott’s recovery strategy became clear, we asked what the point of the Abbott government was in his post-brush-with-death mode. It’s a question now being much more widely asked: having abandoned virtually any reform efforts — this week the government even distanced itself from the mild recommendations of the Productivity Commission’s industrial relations report — what is the point of being in power for Tony Abbott, other than to merely be in power? But the question is more pointed now, because even when Bill Shorten was in deep trouble, Labor still led the government easily in the polls with a persistent four-point lead; courtesy of Bronwyn Bishop, that lead is now six points. That’s despite Labor’s vote not shifting — it is the Greens who have picked up a couple of points in recent weeks.

The six-point deficit may be temporary; if that stubborn four-point deficit was the result of taking tough decisions, it would at least provide the platform for a consistent message to the electorate of a government prepared to do what was economically necessary at the expense of popularity. But that deficit has remained despite the abandonment of virtually any reform, even reforms for which there is strong backing from the electorate, like reducing tax concessions for superannuation.

It’s hard to see where Abbott can go from here: he is in his own valley of death, and is relying on a lucky break — another Shorten stumble, a sudden polling turnaround — to find his way out. Perhaps he’ll head back to national security yet again, perhaps — although it’s become clear that the government has badly bungled the citizenship-stripping bill, and that it is going to require significant amendments, a stuff-up to put alongside its cover-up of the Man Monis letter. When he’s not talking about stopping terrorists, Abbott appears adrift and directionless. Perhaps the return of Parliament will lift him — he ended the June sittings with confidence and swagger, though all eyes will initially be on a new speaker and how independent he (there are no shes in the contest so far) turns out to be.

But with a year, tops, until the next election, Abbott is looking increasingly out of time as well as out of options. Minister for Social Services Scott Morrison is now virtually openly touting his leadership ambitions; Malcolm Turnbull appears to have decided he can offer a running commentary on the government’s woes, either explicitly or by pointed use of social media. The only good news during the week was that Warren Truss is going to go round again at the next election, sparing the government — and the country — from the lunacy of Barnaby Joyce becoming deputy Prime Minister. But the question for Abbott’s colleagues isn’t just about his political judgment any more, it’s about why they are in government at all.

It used to be said of the Rudd and Gillard governments that no one knew what Labor stood for. That question now equally applies to Abbott.

“When he’s not talking about stopping terrorists, Abbott appears adrift and directionless.”

I am sure the Family Court can provide some more terrorists to help.

“now equally applies to Abbott”? Surely it has always applied to Abbott.

Oh dear Bernard, so it’s economic mismanagement to spend $60,000 per voter in SA to build some ships. Well what would you rather do, spend the coin overseas to benfit the voters in Northern Germany, Southern Sweden or Japan?
It is not a simple case of getting the cheapest price it is also about retaining skills , knowledge and jobs in Australia. BTW The Collins Class sub had a troubled start, but is now recognised as the best non nuclear sub in the world, just ask the Yanks.