What the heck is ‘excellence’? Arts community tries govt in absentia

The opening hearing of a Senate Inquiry into the Arts portfolio discovered an industry bitterly opposed to George Brandis’ Excellence Program. 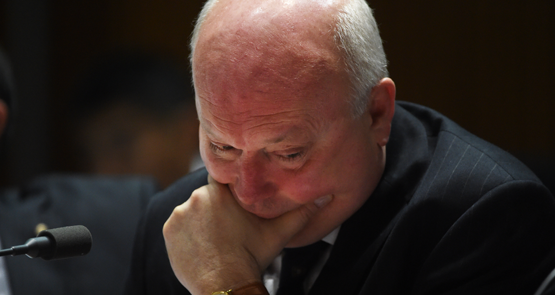 Senate inquiries are often rather sleepy affairs. All too often they drone on in a committee room unnoticed, as this or that expert gives evidence to a panel of listless junior senators.

Not so yesterday in Melbourne, on the first day of the Senate’s Inquiry into the Impact of the 2014 and 2015 Commonwealth Budget decisions on the Arts. A conference room in the Hotel Grand Chancellor on Lonsdale Street was packed with prominent arts industry figures. Seats were hard to come by, and at times it was standing room only. There were rounds of applause after those called to appear gave evidence. As one staffer remarked to Crikey over afternoon tea, “it’s not normally like this”.

Not everyone turned up, however. Despite a healthy representation from Labor and the Greens, no one from the Coalition attended. The conspicuous absence of government representatives spoke volumes.

Wednesday’s testimony came from a who’s-who of Victoria’s arts and culture, including artists, directors and producers from the theatre, dance, writing and regional arts sectors.

The overwhelming theme to emerge was criticism of George Brandis’ National Program for Excellence in the Arts, and fear for the future of the vibrant small-to-medium sector. Speaker after speaker slammed the new Excellence Program as vague, confusing and exclusionary. Speaker after speaker expressed real fear for the viability of small arts companies and the future of the arts.

Perhaps the most interesting new fact to emerge from yesterday’s proceedings was the arts sector’s dismay and confusion with the draft guidelines of the Excellence Program. Regional Arts Victoria’s Esther Anatolitis pointed out there was no formal definition in the guidelines of excellence, and what it constituted. Live Performance Australia’s Evelyn Richardson (one of the few not automatically opposed to the Excellence Program) said the guidelines were “not equitable or transparent enough”.

A number of speakers pointed to the shortcomings of the peer review mechanisms in the new program. Several pointed out that grant decisions could be kept secret, as Crikey has reported before.

A number of prominent arts figures pointed out that the Excellence fund excluded individual artists. As Not Yet It’s Difficult’s David Pledger told the committee in a trenchant presentation, individual artists remain some of the most internationally recognised figures in Australian culture, and yet are unable to apply to the new program. “I’m the first Australian artist to open a major European performing arts festival,” Pledger pointed out, “and yet I can’t apply the National Program for Excellence in the Arts”. Pledger gained a round of applause at the end of his testimony.

One of the most impressive, if depressing, presentations came from the independent dance sector. Acclaimed choreographer Lucy Guerin predicted the cuts to the Australia Council would take the industry “back 30 years” and force many Australian dancers and choreographers to move overseas. “It’s that serious,” she said bluntly. Choreographer Phillip Adams told the committee that “there will be job losses, there will be losses of capacity, experience and skills”.

There was also opposition and confusion from the literature sector. Writing and literature is not formally mentioned in the Excellence guidelines, leading to uncertainty about whether it would be eligible. Individual writers, the backbone of the writing sector, will not be able to apply — a scenario condemned by Australian Poetry’s Peter Matthews.

The literature sector has seen considerable uncertainty under Brandis, with $6 million stripped from the Australia Council to fund a new Books Industry Council, chaired by Louise Adler. However, despite the Books Council being announced late last year, no further details have been released. “We have not received any response to repeated requests for info about the Books Council,” the Melbourne Writers Festival’s Lisa Dempster told the committee.

Some intriguing new data leaked out during various presentations. The Performing Arts Touring Alliance’s Merryn Carter told the committee that the small-to-medium sector was responsible for the bulk of the international touring conducted by Australian performing arts organisations — a whopping 82%. Carter also revealed that in 2013 and 2014, 32 of 44 tours funded by the federal program Playing Australia were from small-to-medium organisations.

All in all, the first hearing of the Senate inquiry revealed a sector almost uniformly hostile to the current Arts Minister, and one deeply concerned about the future for small companies and individual artists.

The all-in brawl is being dubbed the 'arts hunger games'. Paradoxically, the only way to get ahead is to make sure you're on the brink of collapse.

Qantas will sack 6000 of its employees, as job losses are felt across the country. Plus more of the latest coronavirus news.

Of course, “A conference room in the Hotel Grand Chancellor on Lonsdale Street was packed with prominent arts industry figures. Seats were hard to come by, and at times it was standing room only.”
If nothing else the Arts Mafia never miss anything resembling superb free lunches.