It might be a bad look to give people locked up in a detention centre muesli bars labelled "Freedom" ...

In January, the ABC reported that $30,000 worth of muesli bars provided to the Manus Island detention centre by an Australian company called Freedom Foods had been rejected because the word “freedom” would understandably cause offence to the asylum seekers being held there on behalf of the Australian government. 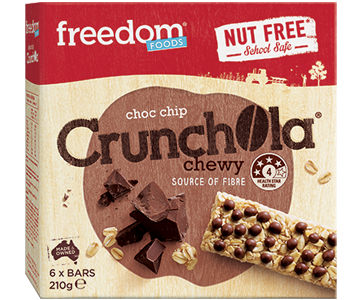 In an uncharacteristically transparent move for the Department of Immigration and Border Protection, a collection of emails between the department and Transfield Services — the company responsible for running the detention centre — were released under freedom-of-information laws to the website Right To Know after a successful crowd-funding campaign organised by @ellipsii.

The emails reveal a mild state of panic both between the department and Transfield over the discovery of the unfortunately named bars, but one Transfield employee doubted the tale of waving the word “freedom” in front of detained asylum seekers was worth writing about.

“And that constitutes news? ” the employee asked.

“Yes unfortunately it does. ‘Govt and Service providers make dumb mistake’ kind of angle …” another replied.

The emails show that contrary to what the department told the ABC, the department’s intervention did lead to the withdrawal of the bars from Manus.

While people detained in Manus will never be resettled in Australia under the current Australian government’s policy, the emails show the government and Transfield were desperate to get the muesli bars out of the detention centre and back to Australia. 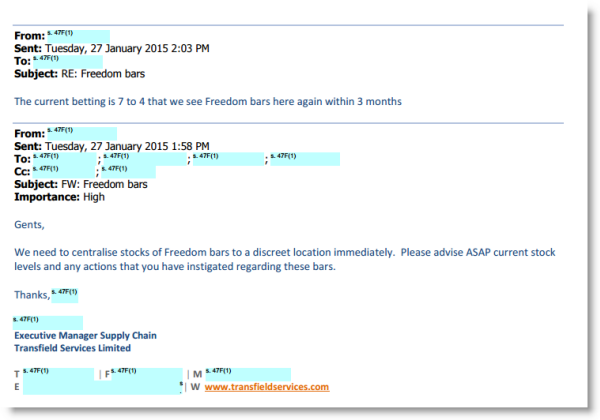 “Can you please ensure all bars are guaranteed and we work out a way to get them back to Australia. I don’t want to take the risk that this product could be issues … if need be we can donate to the Defence Business … please ensure the same in done in Nauru. Please confirm what actions have been taken and when the likely backload will occur,” one Transfield employee said in an email.

“We need to centralise stocks of Freedom bars to a discreet location immediately.  Please advise ASAP current stock levels and any actions that you have instigated regarding these bars,” a supply chain manager at Transfield said after the ABC journalist emailed.

The bars were “quarantined” but not before some were handed out to detainees with their “Freedom” wrapping removed.

Transfield was looking for the positive, however, and was ultimately pleased with ABC’s coverage.

“On the upside at least the report shows that we are purchasing Australian products and actually feeding transferees with food commensurate with Australian standards,” one employee said in an email.

This too stupid to be even wrong headed.

Freedom bars not appropriate for those barred from freedom.

It’s interesting to see the ranking of your priorities. You might consider acquiring some sort of Trite Alert.