Katter for Higgins. While the Bronwyn Bishop saga has almost definitely killed any remote chance of an early election this year, both Labor and the Greens are in the process of getting candidates ready for the 2016 election. Carl Katter, the gay younger brother of independent MP Bob Katter, who has earned a name for himself over the past few years for criticising his sibling’s stance on same-sex marriage, and the apparent absence of gay people in his far north Queensland electorate , is now trying his own hand in federal politics. We have heard that Carl is now confirmed as the Labor candidate for the seat of Higgins.

The seat of former treasurer Peter Costello is currently held by up-and-coming Liberal MP Kelly O’Dwyer,  who retained the seat at the 2013 election with a two-party preferred vote of 59.9%.

It looks to be a three-way contest with the Greens, too. We have heard that Jason Ball, the young gay AFL player known for tackling homophobia in a sport without tackling, is the likely candidate. Despite numerous attempts over the past two weeks to confirm the Greens candidate for Higgins, the Victorian Greens seem to have gone to ground, so unless the secret squirrels in the Greens reveal something soon, we won’t know until the Greens officially make the announcement.

While O’Dwyer has a strong margin in the lead-up to the next election, given the Greens’ upset victory in Prahran in the last Victorian state election over popular Lib Clem Newton-Brown, both Labor and the Greens will be looking to win over the more progressive sections of the Higgins electorate.

Attorney-General’s Department to fund anti-terrorism centre. In the next stage of the government’s continual battle to make hay while the War on Terror sun shines, a tipster informs us that early next week, Justice Minister Michael Keenan will announce millions of dollars in grant funding for the ANU-Deakin Countering Violent Extremism Centre, headed up by Dr Clarke Jones.

Jones has been a frequent commentator on the topic of terrorism and radicalisation and has appeared on panels on the topic with department deputy secretary Katherine Jones.

The Attorney-General’s Department wouldn’t confirm the funding when asked by Crikey, but said grants were funded in accordance with the Commonwealth Grants Guidelines.

Leyonhjelm’s website relaunch hits a snag. Liberal Democrat Senator David Leyonhjelm yesterday relaunched his website, but there were some difficulties in viewing some pages — like the one of Leyonhjelm’s cats — due to bandwidth issues. And keen observers noted that the security certificate for site was (wrongly) shared with another site — andyblu.me. This is a bit of a security concern for the senator’s website, so people were quick to try to investigate why Leyonhjelm might be using the wrong certificate for his website. A Google search of the site associated with the certificate revealed that Leyonhjelm’s site is being hosted by the company where former Yarra Trams employee Andy Blume now works.

Blume was quick to tell Crikey yesterday it was a coincidence that the certificate for his personal website came up on Leyonhjelm’s site, and said he was working to fix the problem.

It looks like the site is working this morning, and we can now all enjoy the many photos of Leyonhjelm’s cats. Job well done! 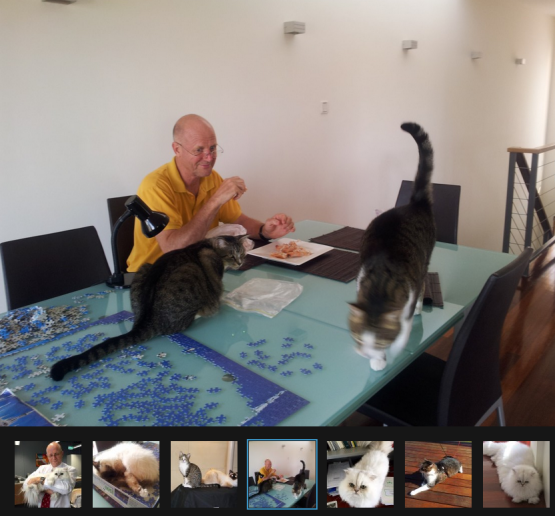 TV wars continued. Yesterday we told you that something was afoot at Seven’s news team, with a tipster saying the network was expanding its local news in Melbourne and Brisbane. Since then, the well-connected Kevin Perry at TV blog Nelbie is reporting that Seven will begin “a bold experiment to revive its news fortunes when it launches local 4pm news services in Melbourne and Brisbane next week”. Apparently the plan is broadly along the same lines as what we wrote yesterday — Seven will have a 4pm local news service in those cities replacing the national one  it currently airs. While viewers in Melbourne will have an extra hour of local news, those in Queensland will get a whooping 90 minutes.

Seven News has seen marked declines in audience shares over the past three years. Channel Nine was bullish at the challenge, telling Nelbie it had no plans to change things up in response to Seven’s gambit.

The Abetz family’s long commitment to the arts. It is no great family secret that Employment Minister Eric Abetz’s great-uncle Otto was a convicted Nazi war criminal, but the Abetz family are usually pretty reticent to talk about it publicly. Abetz’s brother Peter, an MP from Western Australia, probably didn’t help this week when he went on SBS’s Insight program to talk about how his great uncle also did a lot of good as Hitler’s ambassador to occupied France, in saving the culture of France while overseeing the deportation of Jews.

“I think it was one of mixed reaction in that he did some really positive things but he also did participate in, you know, the deportation of the Jews which is really, there’s no excuse for that whatsoever and yet he also did some very positive things. I was told that he, when the Americans were advancing on Paris, because he was so passionate about French culture, he actually negotiated with the Americans to, and the Wehrmacht, that the Germans would vacate Paris and not booby trap anything if the Americans gave them I think three or four days to withdraw and the French were incredibly grateful for that because that way Paris wasn’t actually destroyed.”

It’s good to know the Abetz family has a long commitment to the arts.

Oops. It appears Sydney Morning Herald has published one of its test pages for mobile, despite explicitly stating “DO NOT PUBLISH THIS TO READERS”. 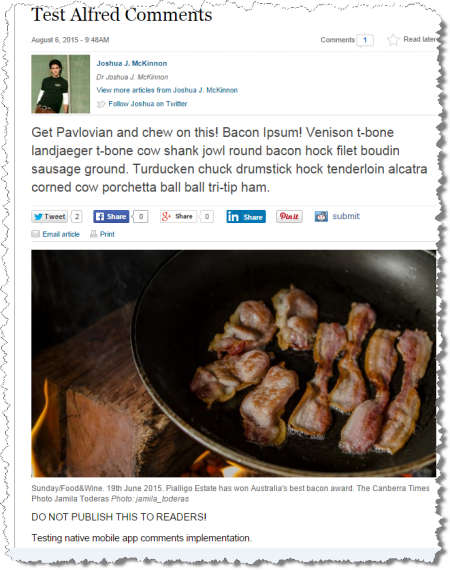 While we are glad to see Bacon Ipsum getting its moment in a mainstream news publication (Australia’s most trusted, no less), we wish the paper had gone with Samuel L. Ipsum instead.

I now realise all cats are libertarians

” both Labor and the Greens will be looking to win over the more progressive sections of the Higgins”. If Labor actually has a “progressive” policy bone in its body I await with baited breath to hear it. It may be a long wait. After all, the last progressive policy to emerge from that source was the recognition of the PRC by the Whitlam government.

Mr Pyne – your kids flying business class at my expense does not pass the pub test at the pubs I frequent.