Rundle: why Abbott really supported recognition — before he didn’t

Tony Abbott's inability to comprehend or lead the process of constitutional recognition for Australia's indigenous people has exposed deep flaws in his political nous. 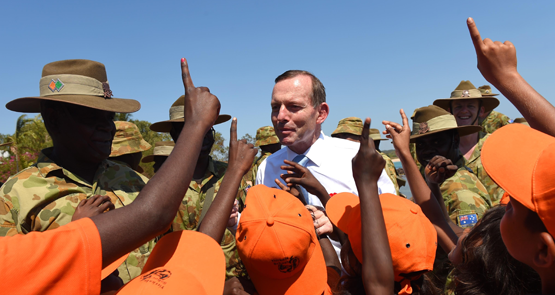 Tony Abbott, God almighty. So far as the right goes, he is Fermat’s Last Theorem — you get a theory of how it might work, it serves well for a long time, and suddenly something comes along to make you revise the whole thing. I’ve thought that Abbott was a right-wing intellectual, a Catholic martyr seeking failure, a hysteric, a man without qualities.

With his latest pronouncements on the indigenous recognition issue, I have come to the conclusion that apart from, or together with, all of the above, he is simply stupid, and I hereby apologise to all those who proffered this simple explanation, while I spurned it.

To recap: indigenous leaders made a joint statement saying it was necessary to have an indigenous people’s convention and meetings leading up to it to nail down a concrete proposal on constitutional recognition and the race-powers clauses, and get reasonably united indigenous backing for such.

Tony Abbott rejected this, or rejected government support for it, on the grounds that it would create a “them-and-us” mentality around the issue. This is simply the point at which Abbott’s support for recognition reaches self-parody.

Can I even, do I have to, I can’t even, well, there may be a few bright eight-year-olds reading this newsletter, so let’s spell it out. Recognition, by its very nature, implies a “them-and-us”. What must be recognised is the other. You recognise a country, an official organisation, you recognise your cousin at the airport though you haven’t seen him for 10 years, you recognise that the criticisms people are making of you are valid — in all these uses of the word, there is a sense of acknowledging the other. You don’t “recognise” your own arm. It’s part of your undivided wholeness. That’s where the word stops working.

The purpose of recognition is to bring a new situation into being, via division and re-synthesis. In the case of constitutional recognition, the purpose is to make official that we are not and never have been one people indivisible. We are two peoples; one of which took the other to the brink of destruction, and then founded a constitutional order on that historical fact.

Recognition in the constitution makes that division explicit in order to put us on the road to a new polity, a new association — one that recognises that we are inextricably bound up with each other in a relationship that must become one of love, if it is not to become separation.

Abbott’s “them-and-us” remark gives the lie to support for recognition from the right. It has never been about a genuine recognition, a process in which two would-be free peoples acknowledge each other. For the right, it has been a largely one-way process by which the settler state grants indigenous people an identity.

For Abbott, a conservative, a monarchist, a believer that our descent from Britain means something, is a distinct way of being in the world, recognition can be nothing other than that. That’s why, to the surprise of many, he was so eager to support it and make it a state-sponsored process. He wanted it to be something that occurred without it ever emerging as an Event, without it bringing anything into being. The state, in this occurrence, is not the non-market entity the right define themselves against. It is the institutional expression of the British nation.

Thus Abbott was wily, but he was also stupid — to believe that a process like recognition could be so contained, or to really believe there was no process of division inherent within it. But he was aided and abetted by the recognition movement, who have managed to get the political sequence of the process almost exactly wrong. The proposal for recognition started as vague and general, and half-a-dozen variants then arose. The state became involved early, before the process had acquired a level of political determination. Outright opposition to it was constructed not as political opposition based on different principles, but as sheer ignorance — and the state could thus be mobilised against it.

Doing it this way has had two effects: it has made the state the agent of a process that hasn’t yet had a level of determination, a concretisation of what is demanded — liberty or death, “Italy united!”, peace, land and bread, a people’s republic, etc — and it has generated a form of opposition based around the statism of the proposal. It gives many a reason or an excuse, call it what you will, to vote against the proposal on the grounds that it has become a heavy-handed process of political-cultural management. Recognitionists argued here, against me, that the difficulty of getting a referendum question up made an involvement with the state necessary. But that was simply to confirm my criticism: that the process had become instrumental, not political, leading to an invidious choice between defeat or victory without much content.

The indigenous people’s convention should have come first, not last — at which point it could have got a degree of state funding for admin, etc, purposes without too much fuss. Recognition is reciprocal, but the demand for it is always asymmetrical. One side has to start the damn process with something that can be replied to (“I love you” [pause] “Hmmmm, shall we order dessert?”).

Now what is being asked for is a state-sponsored convention to frame a demand to the very state that you are going to be doing the demanding of. This seems to be a process of deepening dependency that precludes the very recognition sort. Yes, there needs to be a convention. But it needs to be autonomous, independent, that of a people constituted without the state. Would it really cost that much? Can it not be got from a few private donors?

What can’t be ducked, from either side, is that recognition is a division, a process of it, that may lead to re-synthesis, or to something else. Marriage is a recognition act. So is divorce. That means that opinion has to be expressed from the non-indigenous side, as non-indigenous people. The process must be mutual or it will be nothing at all, and it must involve the right to push back against specific forms of a recognition proposal, even if one supports the overall idea. If recognition were to be proposed on an Aboriginal nation-by-nation basis, for example, your correspondent would vote “no”, because I know the idea of “nations” to be a Eurocentric oversimplification of the character of pre-contact Aboriginal culture (insofar as we can know about that at all).

It’s an important process. Too important for non-indigenous people well-disposed to it to stay out and wait to rubber-stamp “whatever the Aborigines want”, as if there would ever be one single version of that. And too important to be left to Tony Abbott to make what yet another — in the context, most telling phrase — “captain’s call”.

Maybe he just thinks people have the memory span of a goldfish – just like him?

Abbott is clearly troubled by the concept of leadership in general – showed it last week in his silence on the Goodes issue and the Choppergate issue. He left Mike Baird to make the case for changes to the GST and said nothing.
*sigh*

Guy – a great piece. You overlook that as an amateur Ironman, Abbott has perfected the deliberate ignoring of evidence that what you are doing is painful and stupid. It shouldn’t surprise that he takes this stance into all parts of his life!

For Abbott, indigenous recognition has really only meant that the indigenous population recognise him as a good bloke, doing what is best for them, no matter what it is.

Abbott really is an idiot; or, to be kind, hampered by a very limited imagination. Totally inappropriate for PM. But I guess I’m not the only one to have figured that out.