Quit your faux parsimonious whingeing, and let pollies fly the way they need to

The Prime Minister doesn't need Air Force One, but he does need a plane big enough to accommodate his staff. Australia's obsession with political spend is tiresome. 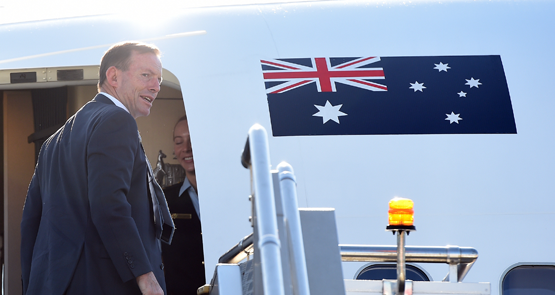 There can now be little doubt that former speaker Bronwyn Bishop mistook extravagance for necessity and now functions for the Abbott government as a woman-sized pink batt. Even if she did not, as has been repeatedly claimed by her insulating Prime Minister, exceed the rules, she certainly exceeded common sense when she elected to spend so much on chartered travel. It is hard to feel pity for a person who has demonstrated so little of it politically herself, and it’s very easy to remind her, publicly and often, that Victorian Labor governments have kept public transport to Geelong at reasonable prices. If she had shown her seniors card, the trifling journey from Melbourne would have been just $5.90 by train and not, as was reported $5227.27 by helicopter.

It’s easy to chide Bishop for her flights of ultra-convenience, Tony Burke for his trip to Uluru, Philip Ruddock for his “Hollywood-themed” ball and, of course, Peter Slipper for his wine-, and possibly mollusc-, related Cabcharge use. As Crikey offered to politicians Tuesday, “pay for your own damn holidays”. Quite. These are persons who, however hard-working, are privileged not only with decent salaries but the management of us. You don’t charter a chopper or pop off to a tropical bolthole with funds provided by those who entrusted you with the revenues of an entire nation. It is not just the money you squandered, you tools. What you continue to spend is our faith that you know what to do with a dollar at all.

This stuff is shocking, but it’s also kind of fun. But what is not so pleasing is to concede that we voters have a more general national difficulty with high office and the luxuries or conveniences it should entail. This is not to suggest that we should excuse another politician who has flown if not actually beyond the bounds of travel entitlements, then well beyond reason. This is not even to suggest that the old Australian habit of parsimony is a bad thing, even if it now really only extends to politicians and is no longer practised by us big spenders at all.

That we frown, for example, upon first-class international air travel for leaders speaks of our stubborn and endearing thrift. But there is a good case to be made for deluxe passage for ministers en route to international summits and one, unfortunately, former foreign minister Bob Carr did not make well with his poor jokes about the quality of operas available for view in business class. Puccini is not going to make much of a diplomatic difference but, arguably, a solid night’s sleep under a rug that has been scrubbed of a previous passenger’s fluids really will. Personally, I don’t want Greg Hunt turning up to the Paris summit with an even grumpier attitude toward climate change than is his custom. Let him have the free slippers and the couverture chocolate. If such comforts help convince him that the planet is warmed by industry, throw in a hydrating face mask as well.

As Crikey aviation reporter Ben Sandilands wrote last year, the national attitude to “excess” in the air doesn’t stop at commercial flights. The Royal Australian Air Force VIP aircrafts available, although not with Air Force One exclusivity, to the Prime Minister were sufficiently clapped out that John Howard was advised during his term that he might fall out of the sky. Fearing political death almost as much as actual death, he ordered an alternative, the least luxurious configuration he reasonably could. The Boeing, wrote Sandilands, fails to accommodate the staff a travelling prime minister might require. That the Australian Antarctic Division’s Airbus, presumably a less dedicated craft, sometimes flies in tandem with the RAAF jet is proof of the electorate’s need to see no greed. It might be more expensive, less secure and terribly inefficient to maintain a humble appearance for prime ministerial flights. But it keeps a nation who demands frugality from its representatives happy.

In 1962, Jacqueline Kennedy took much of America through her careful White House restoration. In a must-see television special, the first lady explained to almost half of the US population how she had spent 2 million of their dollars on bespoke wallpaper panels that depicted the Civil War and replacement of inauthentic fabric. A Tour of the White House with Mrs. John F. Kennedy did not attract critique but wide appreciation for the well-finished lady’s ability to shop. It is tricky to imagine Pattie Menzies, who had knocked out a few bedroom walls in her first turn at the Lodge, mimicking the success in the same year. The headlines then would have been as they are now “Lodge renovations costs blow out”.

There is a practical case for first class ministerial travel, VIP aircraft in which prime ministerial business can continue and a more political one for a Lodge that does not have an interior like a Metricon display home past its prime.  As cosseted and petty as America’s First Renovators might seem to us, their appreciation and construction of an administrative aesthetic has helped US citizens see their president, for better or worse, as truly American.

But there is nothing less truly Australian than tolerating a politician’s budget. Resenting their spend is a nonpartisan pastime. The left doesn’t like it because it’s flashy and the right would prefer that money be disbursed on the free market instead of a state-owned sofa.

Of course, the bastards should pay for their own damn holidays. But perhaps we occasionally pay for our own demands of political thrift with inefficient government.

Just how much would a case of “Good Government” cost?

It would seem that all the 1st-class travel in the world won’t turn this Government into a good one.

Really Mr Sandilands? Really???
I want my parliamentary representative to consider costs in the same way that they want me to pay taxes and come down hard on any Centerlink rort without consideration of intent or excuses! I don’t throw my own money away so why right do pollies have to be so cavalier when they spend the few dollars I hand over to them, in trust? IN TRUST!!

And one other thought. You mention a budget. Who sets the travel budget and where can we look at it?

There is a practical case for first class ministerial travel, […]

Business class is quite adequate to ensure a traveller arrives as well rested as can be expected, and usually half the cost. First class is about needless luxurious extravagance, its practical improvements over Business are minor.

And there is no case, whatsoever, for a politician’s family to be ferried around using taxpayer money as a matter of course.