Julia Gillard has apologised, publicly and expensively, to Nick Xenophon. Plus other media tidbits of the day.

Robinson to ABC. One of The Australian‘s most senior news-breakers will be leaving the paper in three weeks. Natasha Robinson is joining the ABC’s national reporting team as a senior investigative reporter.

Robinson joined the paper when she was a cadet in Sydney 12 years ago. Her work was in the national spotlight recently when a Serbian war criminal she and fellow Oz journo Paige Taylor had found living in Perth 10 years ago was extradited to Croatia for questioning. Dragan Vasiljkovic famously sued The Australian for defamation in 2009. The paper defended the action by arguing the facts published in stories by Robinson and Taylor were true — paving the way for Vasiljkovic’s eventual extradition.

At the ABC, it’s expected Robinson will focus the same areas she has at the Oz, where she had a particular focus on investigative social reporting and indigenous affairs. The national reporting team was established in 2013. Its two dozen ABC journos are given freedom to focus on exclusive investigations free from daily deadlines. They file across the ABC’s many flagship programs. Neil Mercer was recently appointed its head, after founding editor Jo Puccini was appointed executive producer of 7.30 earlier this year. — Myriam Robin

Gillard apologises. While we’re on the topic of the Oz, we noticed this advertisement on page 3:

The ad also appeared in the News Corp tabloids this morning, including in the Daily Tele and the Adelaide Advertiser. Publisher Random House apologised (through Fairfax) to Nick Xenophon in February. Gillard’s book was the best-selling political biography of 2014, selling 62,000 copies. A new edition with extra content (and without the false claim about Xenophon) was released this year. — Myriam Robin

Catalano in court. Domain chief executive Antony “The Cat” Catalano was in court yesterday, where he was found guilty of drink-driving. He had his licence cancelled for 16 months and paid a $500 fine, though we suspect the publicity around the affair is possibly the greater punishment meted out to the Fairfax exec. The Daily Telegraph carried its report on the court appearance on page 2 today, the Herald Sun on page 7. The Hun’s report today details that Catalano was pulled into a police station after driving into a kerb “with force”. Catalano declared he was having chest pains when police tried to test his blood alcohol, and paramedics attended to him and then brought him to Rosebud Hospital. After some time in the emergency department queue, Catalano said he was feeling better. Attempts to breath-test him failed three times, and when the test was finally administered, he returned a blood-alcohol reading of 0.08 — above the 0.05 legal limit. Catalano is expected to appeal, the paper says.

Last year, Catalano’s lawyers successfully had a drink-driving conviction against the executive dropped, after police were found to have unlawfully taken a blood sample. He had had chest pains on that occasion as well.

Catalano made a lot of money when he left Fairfax in 2010 to found Melbourne suburban newspaper group Melbourne Metro Publishing. He then sold that group back to Fairfax after his titles stole away millions in advertising revenues that would otherwise have gone to the Domain operations. All has been forgiven, however — he now heads up Domain, despite being described at the time of the MMP launch by a Fairfax senior manager as “a turncoat” and “no friend of Fairfax”. — Myriam Robin

Super Bowl madness. TV viewing — both free to air and cable — is declining in the US as viewers fragment and favour their mobile devices, but don’t tell CBS or advertisers desperate to reach consumers. Overnight the ad rates for the 2016 Super Bowl were announced by CBS (whose turn it is next year). Sitting down? Advertisers will have to pay US$5 million a spot, up from the US$4.5 million this year when NBC had it. And on top of this there will be digital revenue from Super Bowl ads online. This year’s Super Bowl drew a record 114.4 million viewers to NBC. CBS though will need the extra dollars,  as revenue growth remains sluggish, up just 1% in the June quarter to US3.2 billion. CBS also owns the Showtime premium network and some sports cable channels. Earnings fell 24% to US$322 million from the June quarter of 2014. CBS shares fell 4.6% in normal trading and a further 1% after hours as it failed to escape the sell off of cable groups, such as Disney, Time Warner and 21st Century Fox after Disney revealed subscriber losses for ESPN, the most profitable cable channel in the US. — Glenn Dyer

Not so fantastic, Fox. As forecast, the Murdoch clan’s 21st Century Fox reported a 9% drop in underlying fourth-quarter revenues to US $6.21 billion, as compared to the previous quarter. And despite yet another example of Rupert Murdoch’s optimism about the future, the board OKed a US $5 billion share buyback to make sure the share price doesn’t dip in the coming year. It will need such help after a sell-off in shares of media companies overnight, especially those in cable TV in the wake of a surprise comments from Disney management, which revealed big losses in cable subscribers for its giant ESPN sports network. A combination of the sell-off and the weak earnings result caused Fox shares to lose 10% of their value in normal and after-hours trading as the shares crashed to a new year low of US$30.That wiped close on US$7 billion from the value of the company, and close to US$1 billion from the Murdoch fortune.

Before the fall overnight, Disney had been the best performer in the 30-stock Dow index this year. And the stock is still up 20% in 2015 after the 9% drop. But when the company posted mixed second-quarter figures after trading finished on Tuesday, the focus was on ESPN, where Disney CEO Bob Iger confirmed that there have been “some subscriber losses”.

The company new US$5 billion buyback program, to be completed over the next 12 months, will be timely given the weakness in its operations (it’s an old Murdoch ploy to use shareholder money to support the shares during times of operating weakness). During the fourth quarter, Fox repurchased 34 million Class A (non-voting) shares for US $1.16 billion, bringing the total repurchase to 172 million Class A shares for US$5.94 billion for 2014-15. – Glenn Dyer

Video of the day. Jon Stewart will host his last episode of The Daily Show in a few hours. Here he is in one of his most iconic broadcasts: his first show after 9/11 … 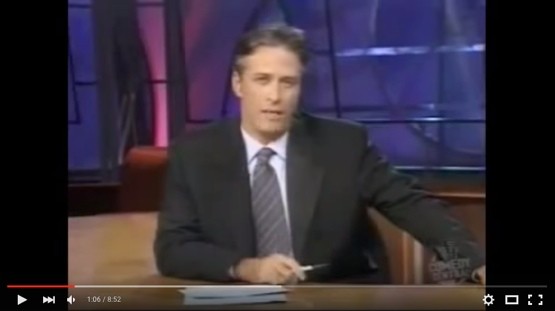 Front page of the day. Seventy years on … 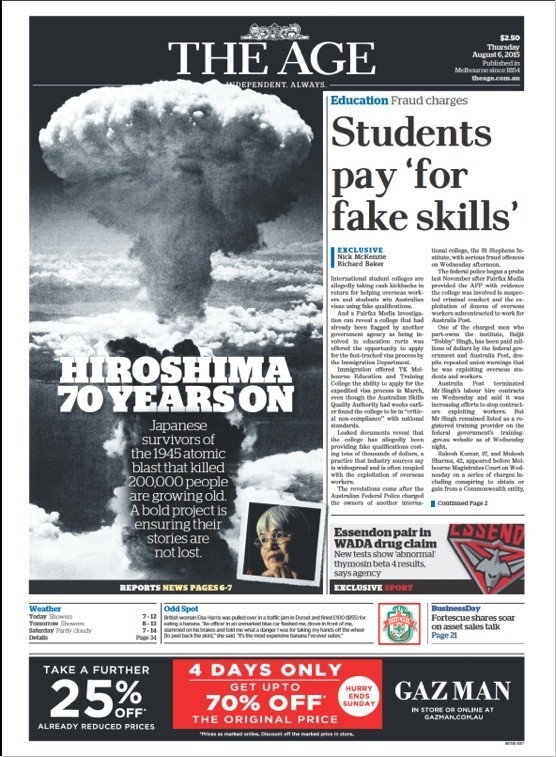 For years now people have been driving truckloads of illegal immigrants through the loopholes in immigration law. I have known about this, its a been a shocking coverup by governments and the department.
This is the double whammy, corrupt education provider who also doubles as job rorter. Surely heads should roll?
And we keep desperate people in concentration camps off shore?
Shame Australian governments shame.