Forget Q&A: the ABC is likely to surrender its independence, and <em>Media Watch</em> is next

If the government gets its way and moves Q&A to the news division, Paul Barry should start updating his resume. 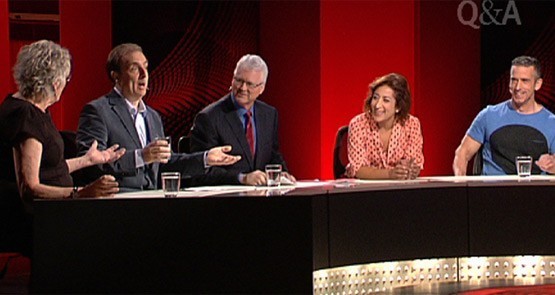 If, as seems certain, ABC chair James Spigelman gets his way today and the board resolves to shift administrative and editorial authority for Q&A from general programming to the news and current affairs department (aka NewsCaff), he will have set a woeful precedent.

For the first time in its 83-year history (with the exception of some understandable restrictions during WWII), the board seems willing to allow politicians — aka the government of the day — to dictate how the ABC should conduct its internal affairs. And the most disturbing aspect of this likely capitulation is that it is precisely the group of people who were appointed to defend the corporation’s independence who will be surrendering without a fight.

No doubt the official announcement released by Aunty’s PR hacks will peddle us all the usual tosh about “priority realignments” and “more appropriate structures of managerial oversight”, but the hard facts of this debacle are that the nation’s public broadcaster looks set to buckle to political blackmail.

Abbott’s actual threat was pathetically weak: a letter sent a month ago under his name to the ABC chair saying that unless the board put Q&A directly under the control of the news and current affairs department, no government frontbenchers would appear on the program.

But folks, it’s just one, modest-rating hour of late-night TV! Who would really miss the odd cabinet minister? Nevertheless, the letter was an outrageous assault on the ABC’s editorial independence by the Prime Minister. Yet instead of calling Abbott’s bluff as a matter of clear principle, Spigelman and the board have accepted the right of any government to tell the national public broadcaster who should run its programs.

In any case, the switch to news and current affairs departmental supervision is unworkable if Q&A is to retain anything like its current format and style. NewsCaff is a journalism-driven empire. It deals in facts, not opinions. Its content is tightly scripted, predominantly recorded and carefully edited. This is to satisfy the obligations of balance, accuracy, fairness, right of reply and all the other editorial policies that apply. Think the 7pm News, 7.30, Foreign Correspondent and Four Corners.

Q&A, by contrast, is a show. It’s an entertainment embroidered from the threads of current events and issues, but it is not current affairs. Guests, audiences and questions are all choreographed to achieve a desired effect. To meet, with any confidence, the conventional requirements of current affairs programming it could not be “live”, nor could it feature the stream of smart-arse tweets that parade across the bottom of the screen. So there, for starters, go two of its most fundamental points of difference.

It’s doubtful that the ABC board would have thought through those practical issues of program making before possibly acceding to Abbott’s demand. Nor should they have, because that is the proper job of management. Had the ABC’s senior staff already proposed to shift Q&A to NewsCaff — and provided a cogent rationale — then the board would be within its rights to consider the idea. But to consider doing so a month after the Prime Minister’s letter was a serious error of judgement likely to have deeply unsettling consequences.

To be fair to Spigelman and the current board, the ABC is already a little bit pregnant on this issue. The rot began during the Howard era when the coalition’s backroom strategists finally realised that years of budget cuts and repeated attacks on the corporation were costing them votes in the ABC-loyal conservative suburbs of Sydney and Melbourne.

The new managing director at the time, Mark Scott, spotted an opportunity. Rather than argue in Canberra for increases in the ABC’s overall appropriation, he pitched for special, additional funding to support motherhood program areas such as local drama, children’s and regional. With an election not far off, Howard saw this as smart politics and let Ultimo play with an extra $100 million or so.

The catch? It was all tied funding. In effect, by accepting this earmarked money, the ABC had conceded to government its right to nominate which types of programming the broadcaster should be making or buying. An irreversible precedent was set.

And now, if simply withholding a few cabinet ministers from the Q&A talent sheet has been enough leverage for the government to browbeat the ABC board into making significant changes to its systems of program control, what next?

It’s not hard to guess. For years the enemies of Media Watch — in particular Gerard Henderson and the usual mob of neocon News Corp suspects — have been urging more “accountability” for the program. That’s code for dumping the opinion standpoint of Media Watch and imposing, in its place, the same editorial standards and practices that apply to ABC news and current affairs output.

If the board surrenders on Q&A today, Paul Barry and his team should be worried.

We will have our ABC censored by the NewsCrap organisation. The little gnome from the Shitney Institute as chief advisor. Still only 16 months to go and things might change for the better. We live in hope.

Meh. I dont agree. As much as it surprises me I find that I do actually agree with Abbott on this one and it would seem Paul Keating might too. You have even argued the case yourself saying that it is a show carefully designed to create an effect. Why should cabinet ministers appear under such circumstances.
Of course as we found from the ban the show is much better without the pollies on it. I also have no problem with tied funding for particular policy reasons whether to stimulate the production industry or whatever. .. so yeah. Meh.

Yes you finally belled the cat David Salter! Neocons..they are Neocons. That means war war and more war. And not much else.Oh sorry and spying on your ass.

Is there no-one with any sense of principle, or even a memory longer than 3 weeks, to know that, as the ALP discovered, one can never appease an pig ignorant, arrogant bully.
The BBC stood up to Churchill sending in the army to deal with welsh strikers and more recently, thatcher during the Falkland operation when it refused to be partisan as denmanded (and expected…right sort of chap an’all that!) so the Foreign Office simply took over broadcasting from the repeater station at Ascension Island.
In other words, the UK and the rest of those who depended upon the BBC (World & Home services)to present the facts without hackery remained well informed.
We already have Sky but it should be remembered, in an attempt to recreate Faux News here, that its audfience was significantly less, and more ill informed that those who did not watch any form of TV spews… sorry news.