The government's approval for the Carmichael coal project was flawed under its own rules. Greg Hunt's response is to change the rules -- but it still won't save this unviable mine. 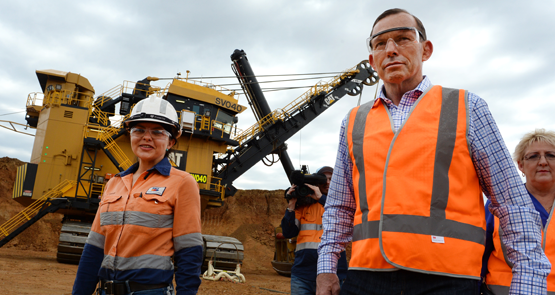 One of the problems the government keeps finding is that reality defies its crony capitalist approach to policymaking. The government tried to deregulate financial planning and advice at the same time as evidence of a series of remarkable scandals began emerging about the big banks. The review established to provide a pretext for dumping the Renewable Energy Target found that the RET would lead to lower electricity prices. Malcolm Turnbull’s own department published a report showing that an ISP notice scheme virtually imposed by the government on ISPs at the behest of the copyright industry would have minimal effect on content downloading — at the same time as Parliament was passing a site-blocking scheme that has been repeatedly demonstrated not to work elsewhere in the world.

And the government’s championship of fossil fuels has similarly kept being tripped up by reality. The share price of resource company Santos is down 43% since Tony Abbott called Australian National University’s decision to divest in the company “stupid”. Coal has continued its years-long price slide since Tony Abbott declared last year that coal was good for humanity and a “foundation for prosperity” into the future. The share price of the world’s biggest private coal company, Peabody Energy, is down a mere 90% since Abbott made that declaration.

And the government’s support for coal hit another hurdle yesterday when it was forced to concede that its approval of Adani’s Carmichael coal mine project in Queensland was found to be flawed under the Environmental Protection and Biodiversity Conservation Act (EPBC).

As Fairfax’s Michael West has demonstrated in forensic detail, the financial problems of the Carmichael project — which the Queensland Labor government and federal Labor also champion — are far greater than even the environmental ones. The company’s wildly overblown claims of profits and jobs have been discredited by the company’s own expert witness; indeed, the falling price of coal has probably made the project unviable. And that’s before you get to the problem of how Adani’s parent company will source the $13 billion-odd in capital needed to establish the mine. Yesterday West revealed the Commonwealth Bank had walked from the project.

Don’t discount the possibility that the government is putting pressure on other banks to get behind Adani. There are rumours — denied by one of the banks involved — that it has done so in relation to another coal project.

But enter the Environment Department. That’s the outfit that gave us the home insulation program tragedy, a debacle that reflected the fact that Environment’s focus is on policy, approvals and grants, not running big programs. But the EPBC is core business for Environment, something it should be expected to get right. Except it didn’t when it approved the Carmichael project, skimping on consideration of the now famous yakka skink and ornamental snake.

Speaking of ornamental, the environment minister is notionally Greg Hunt, whose role is more that of junior industry minister. Did Hunt take responsibility for the stuff-up, which means the EPBC approval process for Carmichael will have to be done again? You can bet, had such an error happened under Labor, the Coalition would have been fulminating about “bungles” and “sovereign risk”. But according to Hunt, it wasn’t the government’s fault but the fault of environmental groups who, Hunt said, “would litigate every step of the way, every element of the project through every possible means.” Hunt wants to change the EPBC to remove what he calls “loopholes” that allow approvals to be challenged.

Even Adani didn’t buy the “it’s the greenies’ fault” line from Hunt, saying “it is regrettable that a technical legal error from the federal Environment Department has exposed the approval to an adverse decision”.

Hunt presumably would criticise environment groups that decided to take illegal protest action against coal, one of the most dangerous contributors to climate change — such as shutting down coal loaders or blockading mines and coal-fired power stations. But Hunt also has a problem with environment groups operating entirely within the law to challenge his approvals — even when they contain legal flaws, even for projects that have been demonstrated to be commercially deeply problematic.

That little runt Greg, “Labor made me do it!”?
Would the Liberal or Labor Party invest their nest eggs in this?

The role of the ‘Environment’ Minister in Abbott’s Government is to keep environmental concerns from getting in the way of profits.

Whats more appalling is that Labour supports this too, even more evidence that they are just ‘Liberal lite’.

What this debacle also demonstrates is that we have a government (and Opposition) that put ideology ahead of science. Being mugged by reality is only a temporary hiccup to this relentlessly antediluvian government.