Fairfax editors have pointed out the success of "curiosity-gap" headlines. But is turning Australia's most trusted (and only) financial newspaper into an outdated BuzzFeed worth the clicks?

Crikey‘s piece yesterday on The Sydney Morning Herald‘s clickbait headlines drew quite a reaction from readers, with many saying it was a source of constant annoyance on the Fairfax websites.

It happens the decision to turn Fairfax websites into BuzzFeed-style purveyors of clickbait comes from the top. Last Friday, in his regular emails to Australian Financial Review staff, editor-in-chief Michael Stutchbury commented directly on the value of “curiosity-gap” headlines, telling his journalists that “digital-friendly” headlines helped signal a story’s importance to readers, without compromising its integrity.

Stutchbury used an example of an in-depth, extensively reported story first written for the AFR‘s magazine about how the anti-corruption crackdown in China had had a knock-on effect on the luxury goods market globally. It came through with the top headline used in the picture below, but this wasn’t conducive to a digital audience. Stutchbury said:

“On the surface, there’s nothing at all wrong with any of that. But we — and others — have run a lot of stories about the anti-corruption crackdown over the past year. In the print version, readers are staring at a spread in a sumptuous magazine so they can see straight away this isn’t just the normal news story on this topic. Online, however, the above headline and write-off don’t signal to the reader that this is something special that they should bother to click onto.”

At 6am, Stutchbury says, a new headline and photo (the bottom picture above) were added:

“It’s intriguing and dramatic, and signals that this story takes the reader right to the scene. The photo of an empty mall backs that up.”

Stutchbury said the key thing about the new “digital-friendly” headline is that it “remains true to the values that the Financial Review‘s core readership would expect. It is not empty click-bait but adds genuine value to the article presentation.”

The headline is classic curiosity-gap — or less charitably, clickbait, enticing readers to click through to the story to find out more. Such headlines work by promising the reader something dramatic, while giving away little about an article’s topic (hence ‘curiosity-gap’). The quote used by the Fin is one given by an anonymous luxury store manager halfway down the piece, and refers to the day Chinese President Xi Jinping arrived in Macau and made it clear “the days of lavish displays of wealth and carefree gambling at casinos by officials were over”.

To prove the value of the new headline, Stutchbury embedded a graph showing how traffic to the article rose after it was changed at 6am. Although, as one sceptical Fairfax journalist pointed out to Crikey yesterday, you’d expect traffic to rise after 6am, when people wake up … 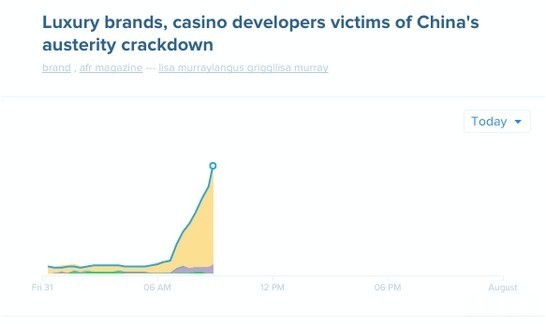 There’s a debate raging in online media circles about whether “curiosity-gap” headlines annoy readers enough to damage a website’s reputation. In a post last November, BuzzFeed editor-in-chief Ben Smith said the viral website had decided to stop using this and other similar formulas years ago. The problem with such clickbait headlines, Smith wrote, was that they over-promised for content that frequently under-delivered. Although readers will click to find out the answer to the tease, they won’t share the story if it’s not worth its headline.

“Readers don’t want to be tricked by headlines; instead, they want to be informed by them,” Smith wrote, citing statistics out of Facebook. The Financial Review‘s story delivers on its headline, but that can’t be said for all of Fairfax’s clickbait. This, for example, was how the SMH teased a story about a guest mixing up politicians on ABC News Breakfast yesterday (describing Trioli’s reaction as “shock” is over-egging it, and anyway, the story wasn’t about her) … 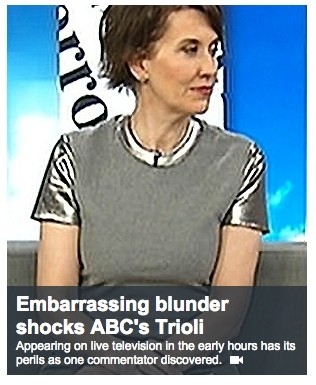 The AFR has a high paywall and is famous, in print at least, for its factual presentation of events. Traffic isn’t as central to its business model as it is to The Sydney Morning Herald, which battles News Corp’s new.com.au for Australian online news supremacy by operating a far more porous paywall, allowing people to read 30 articles every month for free. Recently the Fin loosened its paywall somewhat, making some content, like Mark Latham’s feminist-baiting columns, available to non-subscribers.

The Fin is facing pressure on traffic from competitor The Australian. The broadsheet has been telling staff (and possibly advertisers) that the combined traffic from the Oz’s new business section, Australian Business Review, and that of the Business Spectator stable outpaces the traffic of the AFR.

I agree with the Buzzfeed guy – too much clickbait IS damaging the SMH’s brand. I’d much rather informative headlines. It absolutely dents the SMH’s reputation, which should be a major concern for a publisher than can proudly boast having the most trusted newspaper in the country. Rather than using ‘curiosity-gap’ headlines, Faifax websites should spend more time optimising their articles, or whatever they have to do, to ensure they are heavily featured in searches such as Google News. It always seems to be articles from The Oz that come up in Google News, while even directly searching for the online version of a print article I’ve read in the SMH will often yield no results.

I gave up on the SMH a couple of months ago now purely because I was sick of the clickbait.

Why bother trawling through eye cancerous crap when the ABC has such an amazing website by comparison? It’s almost as if the fall in integrity over at Fairfax has been inversely proportional to the improvements made by the ABC.

Funnily enough – I actually enjoy reading the SMH in print form when I’m down at the coffee shop… so the stories haven’t changed that much, just the presentation.

Myriam, an old cliché tells us that imitation is the sincerest form of flattery. If that’s true you should be chuffed that the SMH is paying Crikey such a wonderful compliment.