Remorselessly dumb: why was MH17 allowed to fly over a war zone?

Malaysia Airlines allowed a passenger jet to fly over war-torn eastern Ukraine. As a result, 298 people died. Now we ask, who's to blame? 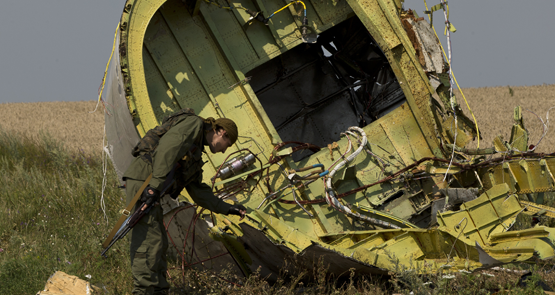 While tests continue on the piece of wing that might — or might not — have come from missing Malaysia Airlines flight MH370, the conduct of the airline in permitting MH17 to fly across a war zone in Ukraine last year needs to be kept in mind amid continued calls for a UN criminal probe.

What was Malaysia Airlines thinking on July 17, 2014, when it allowed another of its Boeing 777-200ERs  to cross eastern Ukraine, where missiles were known to have been used against aircraft in the conflict between pro-Russia separatists and Ukrainian forces?

There are stories in the European media that the draft final report from the Dutch-led MH17 accident inquiry takes this question seriously. The report is due to be released in October, after interested parties who lost citizens in the crash, including the Netherlands, Australia and Malaysia, have reviewed and commented on the draft version.

That flight from Amsterdam to Kuala Lumpur had 298 people on board, and all were killed when a large number of high-energy objects pierced the forward section of the 777, consistent with the explosion of a Russian-built Buk missile, a weapon already known to have been deployed in the area.

There is persuasive circumstantial information that says pro-Russian forces shot down the airliner, possibly mistaking it for a Ukrainian aircraft. Russia has already vetoed a UN Security Council push for a criminal probe by the organisation, and continued pressure for Russia to change its mind appears to be intended entirely for Western consumption, since there is Buckley’s chance that Moscow will budge in its opposition to such a probe.

This shouting at Russia does nothing to resolve the fundamental problem of an airline, which like some others, maintained that flying across an area where Ukraine was struggling to maintain its sovereignty was safe.

When Malaysia Airlines was flight-planning the route to be followed by MH17 it was advised by Eurocontrol that Ukraine’s air-traffic control service had declared it safe to fly over Ukraine’s east at an altitude of at least 32,000 feet.

However, while Ukraine no longer had effective or absolute sovereignty over that part of its sky, it did have US$200 million (or more) worth of vital foreign exchange that it earned from charging airlines for using its airspace, which, for many carriers, including Malaysia Airlines, saved time and thus fuel and other operating costs on a per-hour basis.

There were two glaring flaws in the announced airspace restriction that ought to have been bleeding obvious to the airlines that chose to continue to use it. One was that the Buk missile could sprint at supersonic speeds to destroy targets at altitudes as high as 70,000 feet. The other was that, in the event of a cabin depressurisation, an airliner must rapidly descend to a lower altitude, generally 13,000 feet or lower, depending on any obstacles, before the cabin emergency oxygen supply runs out.

That basic operational constraint, of the possibility that a cabin depressurisation would force a descent into a conflict zone that was already declared to be unsafe, appears to have escaped Malaysia Airlines’ attention.

An insight into the thinking of Malaysia Airlines at the time was provided in this Fairfax story with comments from its then-commercial director Hugh Dunleavy, who has subsequently left the carrier:

‘”This tragedy has taught us that despite following the guidelines and advice set out by the governing bodies, the skies above certain territories are simply not safe. MH17 has shown us airlines can no longer rely on existing industry bodies for this information.”

“Mr Dunleavy is calling for the industry to form ‘one body to be the arbiter of where we can fly’.

“‘Airlines such as ours should be left to focus on the quality of our product in the air, not on the air corridors we fly in, which should be guaranteed as safe passage,’ he said.”

This contradicts the requirements and obligations incumbent on an airline that holds an “air operator’s certificate”; in terms of international aviation in general, and certainly in Australia, the US, Canada, Europe and Japan, to name just a few jurisdictions.

Those processes make safety the first priority and obligation of a licensed carrier, not “quality of product”.

The quality of the satay sticks served by Malaysia Airlines to its passengers is not its No. 1 priority. But having the smarts to not fly over an active war zone should be a priority.

Did it ever percolate into the minds of a caring and safety-conscious management at Malaysia Airlines that taking advice from Ukraine that its air corridors were safe above 32,000 feet might have been influenced by the US$200 million in overflight fees it collects annually from airlines, including Malaysia Airlines?

How remorselessly dumb can an airline be? Did Malaysia Airlines, in its operational wisdom, ever ask what the safety consequences in normal day-to-day flying would be in terms of a cabin pressure failure in any airliner passing over a war zone?

Unless airlines like Malaysia Airlines — and its new rebranded identity, to be revealed next month — focus on their responsibilities for doing their own assessment of the safety of air routes, disasters like MH17 could continue to occur.  It might have been only one shoot-down in recent times, but it killed 298 people, and without taking away any responsibility for the actual act that destroyed the flight from those who launched the missile, Malaysia Airlines should never have accepted the tainted fiction that flying at 32,000 feet over a war zone was safe.