Poll Bludger: why Nick Xenophon has the major parties trembling in their boots

Why is the government so terribly concerned with South Australia? One independent senator is making an awful lot of trouble for the major parties ... 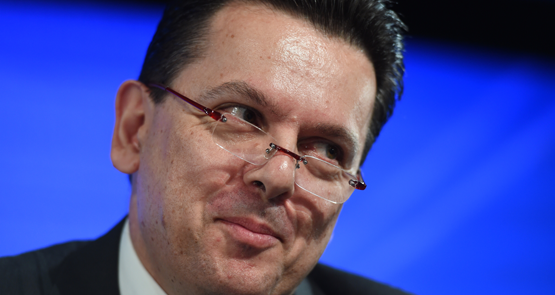 As it endeavours to put the wreckage of Choppergate behind it with the greatest possible haste, the Abbott government has chosen a curious new front to mount its latest offensive.

In the early part of its term, the government gave every indication that it had no lower strategic priority than South Australia, having softened the state up for the loss of the contract to build the next generation of submarines and exercised its free-market instincts when Holden announced the end of car manufacturing in Australia.

In crude electoral terms, this was all too easily to fathom. On the Coalition side of the electoral pendulum, the only South Australian seat as far up as the 7% mark is Hindmarsh in Adelaide’s inner west, which was the Liberals’ only gain in the state in 2013.

Labor’s five South Australian seats, all but one of which were held by the Liberals for at least two terms during the Howard years, now have margins of no less than 3%, and do not look like realistic prospects for the Liberals in the current environment.

So it might be a surprise that the entire cabinet should roll into town this week by way of adding impetus to a $40 billion boost to defence shipbuilding by bringing forward construction of new frigates and patrol boats.

A possible explanation is that the government has learned a timely lesson about the limitations of traditional marginal-seat politics in an age of fragmenting party loyalties.

Until now, it’s been possible to view phenomena such as the rise of the Greens, the Senate micro-party revolution, and populist personality cults from Pauline Hanson to Clive Palmer as secondary to the as-yet undisturbed routine of Coalition and Labor governments alternating in office.

The dangers of such complacency were amply illustrated by the experience of the Labour Party in Scotland at Britain’s general election in May. After dominating the two-party contest there since the Thatcher years, Labour had grown accustomed to waging its battles in England and leaving its strongholds on the periphery of the United Kingdom to look after themselves.

The legacy of this approach was a generation or more of voters who had come to feel entirely disconnected from Westminster politics, and needed only the right catalyst to abandon Labour en masse. When just such an opportunity arrived in the shape of last November’s independence referendum, the blow to Britain’s two-party hegemony proved so forceful that the union itself might not recover.

South Australia, of course, does not have anything quite so dramatic as a nationalist movement to hand.

What it does have, though, is Nick Xenophon — and it’s quite possible that the independent Senator will prove the wild card of the next election not just in relation to South Australia, but for the nation as a whole.

Xenophon may just be one member out of a large and noisy Senate crossbench, but this should not obscure his astonishing achievement in outpolling the Labor Party at South Australia’s Senate election in 2013.

He now stands prepared to exploit the further opportunity for empire building that the next federal election will provide, having registered a snappily branded political party, the Nick Xenophon Team (NXT).

Even though he is yet to enjoy the unique opportunity of an election campaign to establish his operation in the public mind, the Xenophon factor appears to be feeding strongly into opinion polling.

A poll conducted a fortnight ago for the CFMEU by ReachTEL found that Xenophon posed a mortal threat to Christopher Pyne in his electorate of Sturt — tempting though it might be to conclude that the question was posed in a manner favourable to what is, at this stage, a purely hypothetical candidacy.

A more conservative reading of state voting intention is shown in the chart below, which tracks state-level polling from Newspoll, Essential Research and Ipsos. This points to a 10% slump in Liberal support since the 2013 election and a clear and ongoing trend in favour of “others”, which is up from 7.3% to 17.4%. 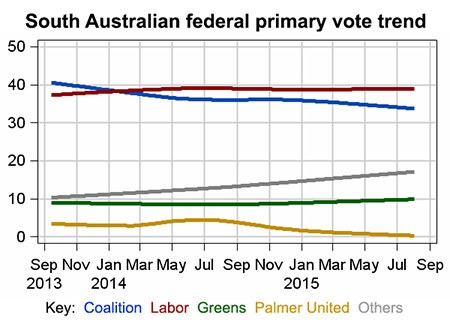 The implications of Xenophon’s support base as measured by the 2013 Senate result are detailed in a blog post by ABC election analyst Antony Green.

This demonstrates the breadth of Xenophon’s appeal both from an ideological perspective, with his 24.9% Senate vote having been gouged in equal measure from Labor and Liberal, and a geographic one, with his vote across the state’s 11 highly diverse lower house electorates covering a fairly narrow range from 18% to 28.8%.

Remarkably, Xenophon managed to outpoll one major party or both in every electorate but one, and in no case was the Labor or Liberal vote anywhere near 50%.

The arithmetic of preferential voting being what it is, such a result would, if transposed to the lower house, sweep Xenophon to victory in every seat bar the remote electorate of Grey — and even that would be in play with a strong enough flow of minor-party preferences.

But against this, it must be recognised that voters in South Australia have accumulated a litany of grievances against Tony Abbott, and that the feeble economic record of a 13-year-old state government gives them little incentive to let Labor off the hook.

With a well-oiled campaign and judiciously chosen candidates, it wouldn’t pay to rule anything out — including a number of high-profile scalps up to and including Christopher Pyne, and perhaps even the kingmaker role in deciding the next government.

Could we have a candidate in neglected far north Queensland please? A region with some of the most mediocre politicians in Australia.

I live in SA, and wouldn’t vote for NXT if you paid me!
Xenophon talks a lot, but delivers little. Just a showman.
About the last thing we need here, or federally, is another populist party with all the instability that follows.
Hopefully, people will wise-up before the next election. What we desperately need in this country is a major party government with a ‘mandate’ to begin repairing the damage done by the rAbbott and his motley crew!!

The Abbott Government’s promises to build Navy surface vessels / frigates in SA don’t commence until 2018 and 2020, well after the next election and even the one after, leaving plenty of time for Abbott to renege, and it has form in this regard. A third party could campaign on the basis of keeping the (ex-nuptuals), whether LNP or Labor, to their promises.

We need this shift across the whole country. The way the two major parties behave there’s nothing to lose and everything to gain by getting some fresh blood into the system. We’re sick of cynical power grabbing. Nick? Someone? Please field candidates in my electorate.