The ABC board will likely decide the fate of Q&A tomorrow -- and there is quite a lot at stake. Plus other media tidbits of the day.

A solution in sight? A decision on whether to move Q&A’s oversight to the ABC’s news division could be made this week, after The Australian revealed (and Crikey confirmed) this morning that the show’s future is on the agenda of the ABC’s next board meeting — due to take place tomorrow.

ABC insiders, however, weren’t thrilled about the appearance of the story, which rehashed Turnbull’s arguments that the ABC board needs to take a more robust role in editorial matters. Some suspect Turnbull was the source of the Oz’s piece, and they are viewing it as a government attempt to gain editorial interference at the public broadcaster. Such fears were stoked by Tony Abbott’s extraordinary letter to ABC chairman James Spigelman saying the ban on frontbenchers appearing on the panel show would be lifted if it were moved to the news division of the ABC (it currently sits under the entertainment division). As the Oz notes, only three panelists have been announced for next Monday’s episode of Q&A, suggesting the ABC perhaps expects the ban to be lifted by next Monday.

It’s a difficult situation for the ABC board members, who have for some time expressed a desire to examine the operations of Q&A (they commissioned an editorial review of the program before the Zaky Mallah controversy) but are also highly aware of the precedent that could be set if they are seen to be giving in to political pressure on the Q&A matter. Oh, to be a fly on the wall at Wednesday’s board meeting … — Myriam Robin

Mitchell v Bolt Day 4. Today’s Cut and Paste in The Australian notes that Andrew Bolt asked his readers to email the paper about attacks on his arguments, and with characteristic snark tallies how many readers were moved enough to email (the answer, if you’re wondering is, 29).

But, Bolt says, the paper should also consider the comments on its own post, the 200+ comments he got on his, and the “many hundreds” of protests sent to the paper when it has attacked him in the past.

For a bit of fun, we decided to dig through the comments on Bolt’s blog about the Oz. Here are some of our favourites:

Good problems to have? After the Charlie Hebdo massacre, subscriptions and donations to the satirical news weekly flowed. The magazine is now believed to sit on a cash pile of $33 million. That’s set up a schism, with many of its writers and cartoonists wanting to see the paper become a collective enterprise, while its new editor wants to use the money to assure its future. Vanity Fair reports on the French mistrust of money, and the differences of opinion within Charlie:

“Charlie is unused to its new moneyed and global status, and uncomfortable with it. It is adapting as best it can. Luzier, the cartoonist known as ‘Luz’ and a man widely seen as the soul of the paper, has said he will quit in September. Speaking of ‘the melancholy of the unrecoverable,’ he told the newspaper Liberation that the burden had been ‘too much to bear’ and that Charlie is ‘in post-traumatic shock’. Earlier he had summed up the dismay when he told Vice: ‘The money we have is absurd. The number of readers we have is absurd. All the support we have is magnificent but also absurd. I do not know how we will manage to emerge from all this absurdity.'”

A tale of two Republican presidential debates. Fox has selected the teams for Thursday night’s big Republican debates, effectively separating them into a major and minor league. The Rug (aka Donald Trump) will be lead-off batter in the 9pm main game (US east coast time). Joining him as the rest of the big-league 10: Jeb Bush, Scott Walker, Ben Carson, Mike Huckabee, Ted Cruz, Rand Paul, Marco Rubio, Chris Christie and John Kasich. That means the losers, bumped down to the minor league, are: Rick Perry, Lindsey Graham, Bobby Jindal, Rick Santorum, Carly Fiorina, George Pataki, and Jim Gilmore (who only launched his candidacy last month, so he had no chance of getting into the top team). They play at 5pm on Fox (US east coast time). Facebook is a co-host of the debates. — Glenn Dyer

US media results. Time Inc managed a small rise in profit in the June quarter, despite another nasty fall in revenues, especially from advertising in its magazines (such as Time, Sports Illustrated, Fortune and Food & Wine). Revenue slid 5.7% to US$773 million in the quarter (the stronger US dollar and other small items reduced the fall to 4%), with print and other ad revenues down 11% as the number of advertising pages sold fell in the quarter.

In contrast to Time’s cost-driven savings profit boost, cable TV group Scripps Networks Interactive said its second-quarter earnings increased 26% on growth in advertising revenue and fees paid by cable providers. Ad revenues edged up 1.6% to US$496.9 million, while affiliate fees, which are paid by cable companies (such as Comcast and Time Warner Cable) and other distributors, rose 8.5% to US$203.4 million. Overall, Scripps reported a profit of US$193.7 million, up from US$153.8 million.

Disney confirmed its position at the top of the US media sectors with revenues rose from US$12.5 billion to US$13.1 billion, while net income increased from US$2.2 billion to US$2.5 billion. And, finally, the Murdoch clan’s 21st Century Fox’s fourth-quarter and full-year figures are out tomorrow morning but will be overshadowed by the powerhouse that is Disney. — Glenn Dyer

Video of the day. When Melbourne news veteran Peter Hitchener got a coughing fit mid-bulletin … 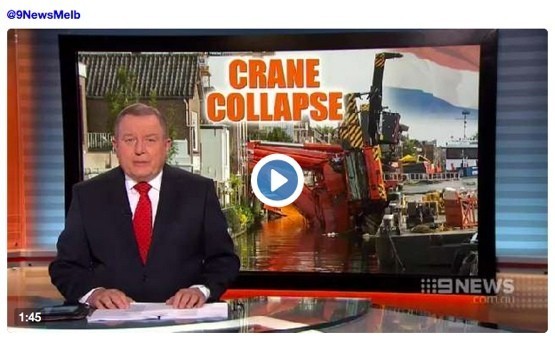 ‘Marxist reporting’? Had a chuckle at that one. Cold War anyone?

Are these bolt lovers for real? These comments all seem to be coming from brain washed folk who listen to the likes of Hadley and jones, although presumably they are from Melbourne. Goes to show, you can fool a few people a lot of the time, bit like those recruiters of the bad guys OS.

You don’t have to be unbalanced to be a Blotsicle, but …..? On second thoughts?