Isentia Index: we’ve lost a Bishop, will Ruddock be our knight?

Bronwyn Bishop dominates the charts as choppergate draws to a conclusion.

Former Speaker Bronwyn Bishop announced her resignation from the position on Sunday, potentially ruining the afternoons of all on-call journalists who were at the pub at the time, and seeing her rise back to the top of this week’s index after a short break and some more digging on wedding expenses. Speculation has now turned to who the possible replacement may be, along with a possible new Deputy Speaker as Bruce Scott announced his retirement, pushing Former Whip Philip Ruddock into the top 20 and seeing any coverage about the GST, state premiers and Treasurer Joe Hockey move down the list. Prime Minister Tony Abbott also faced scrutiny, particularly after someone remembered appointing Bishop to Speaker in the first place was another “Captain’s call”. A simpler time.

Deputy Prime Minister Warren Truss also had his expenses looked at and criticised after taking a private charter flight during the peak of #choppergate, while Fairfax MP Clive Palmer’s popularity on social media translated to traditional after his “Bye bye Bronwyn” video was posted to a Change.org petition and he announced a no-confidence motion alongside Independent MP Andrew Wilkie (seventh on our list this week). Foreign Minister Julie Bishop received screen time for her speech at the UN Security Council in New York, accusing Russia of denying justice to victims of the MH17 tragedy by using its power of veto to block an international crime tribunal. Communications Minister Malcolm Turnbull — up four places this week to ninth — took the train from Melbourne to Geelong, perhaps showing Bishop how it’s done, while also explaining that the use of parliamentary entitlements should be guided by “common sense”. Can someone fill him in on the old saying that common sense isn’t that common, please?

Education Minister Christopher Pyne attracted crowds to his book launch in Melbourne last week, with a glass panel of the NAB building smashed as police tried to keep protesters at bay. Trade Minister Andrew Robb is up 11 places this week as Trans-Pacific Partnership negotiations heat up, with talks reportedly stalled amid divisions over the dairy industry, car component export rules and patent protection for a new generation of drugs. Federal Member for Murray Sharman Stone backed quotas for women and called for Parliament to be less aggressive, describing question time as “rubbish” and a disincentive to women wanting to enter politics. 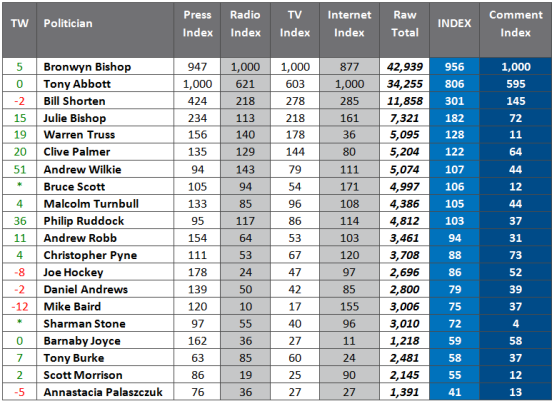 #choppergate continues, with the PM tagging along on social media — “driving Ms Bishop” anyone? — for the ride.

Not much room for anything other than the departure of the Speaker on talkback radio this week, with numbers sky-high for Bishop.

I think comedian Ricky Gervais said it best. “It’s not for food. It’s not the shooting, or tin cans would do. It must just be the thrill of killing. Mental.” RIP, Cecil.