Citizenship-stripping bill: a mess from start to finish

The government's bill to strip people linked to terrorism of their citizenship has been savaged by legal experts. But will the intelligence committee do its job properly? 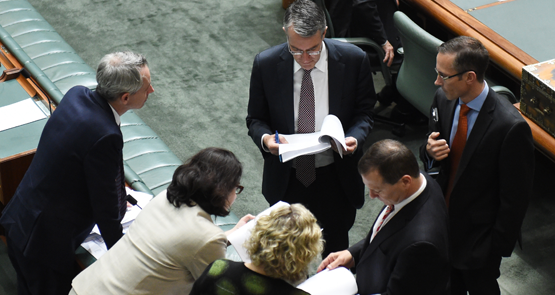 Labor MPs look over the citizenship-stripping legislation on June 23, 2015

The government’s controversial citizenship-stripping bill is in deep trouble, as it becomes apparent that it has been drafted too hastily and the “solution” to the problem of ministerial discretion has merely pushed it further up the bureaucratic chain.

The bill is currently being considered by the Joint Committee on Intelligence and Security, which conducted hearings yesterday and today. The bill would cause people engaging in various forms of terrorism-linked conduct to “automatically” lose their citizenship by ministerial declaration. Cabinet split over the bill, which the Prime Minister leaked to News Corp before springing on his colleagues, and in particular over giving the Department of Immigration an unfettered and unreviewable power to strip anyone with dual citizenship of their Australian citizenship. The original proposal would also have stripped non-dual nationals of their citizenship if they might have been able to obtain citizenship elsewhere.

University of NSW Law Professor George Williams spoke at the JCIS hearing yesterday and condemned the bill, which he described as “almost set up to fail”. A number of the problems with the bill are already identified — for example, the bill as drafted would strip people guilty of vandalising Commonwealth property of their citizenship. However, Williams yesterday identified another major problem.

In seeking to avoid both the constitutional and political problem of having an unreviewable ministerial discretion to strip people of their citizenship, government lawyers hastily crafted a fix that preserved the proposal but removed ministerial discretion. Under the bill as presented to Parliament, citizens would be deemed to have “automatically” renounced their citizenship if they engaged in certain acts; the role of the minister was merely to issue a notice to that effect once he or she “becomes aware” of that conduct.

As Williams noted, this simply pushes the actual decision to revoke citizenship from the minister back to the bureaucrats who advise him or her that such conduct has taken place — the Immigration Department, and intelligence and law enforcement agencies. It becomes their decision as to whether a person has engaged in the relevant conduct — and that decision, too, is unreviewable; indeed, unlike the ministerial notice, there is no possibility that the person whose citizenship may be stripped may even be made aware that they face such a fate.

These bureaucrats are also, in a non-legal sense, even less accountable than a minister, who at least is accountable to Parliament and to public opinion. The government’s “fix” thus compounds the problem. It also shifts yet more power to the least accountable and most powerful bureaucrats in the country, with the minister required to act as a rubber stamp for their decision.

And the fix creates another problem: as constitutional law expert Professor Anne Twomey noted in her submission to the committee, all of this applies regardless of intent: the bill is so widely drafted that unwittingly raising funds or otherwise assisting terrorists or terrorist groups would automatically lead to the loss of citizenship. Twomey uses the real example of the flying instructors who taught the 9/11 terrorists how to fly:

“Does this mean that a person ‘renounces’ his or her citizenship by simply doing his or her job (e.g. training pilots) while being completely unaware that this is training being undertaken in preparation for committing a terrorist act? This is particularly important, because unlike a criminal offence, renunciation of citizenship is automatic and there is no issue of discretion to prosecute and no determination by a court — hence there is no requirement to prove guilty intent.”

Twomey also noted a number of both legal and drafting howlers in the bill that were, she said, “a consequence of making policy on the run and pursuing thought bubbles and sound bites without having first sought and received considered legal advice and without taking adequate time to work through the complexities and consequences of the proposed law”.

These damning assessments from two of the country’s best legal authorities are highly problematic for JCIS. Unusually, committee chair Dan Tehan was actually behind the push for bill, saying “it is time we looked at new ways to revoke the citizenship of those who wish to harm us and have abused those rights and privileges. This is not radical; it’s plain common sense.” It’s not at all clear that JCIS — which by virtue of its statutory nature is intended to be less partisan than normal committees, reflecting its serious responsibilities — will be able to conduct a genuinely independent assessment of the bill before it when the committee chair has been forthright in his advocacy for it. But someone has to save the government from its own sloppy, poorly considered legislation.

If dual citizens had their Aust citizenship removed and the alternative countries did not want the imputed terrorists, we could always fill the orange lifeboats with ex-Aussies and tow them out into the Indian Ocean.

And the me too ALP signed up for this without any critical thinking,too busy taking the family on holidays at our expense maybe?
Its a real can of worms of course, how does it apply to me with three passports or my son who can have four?

If the ALP had any sense, it’d oppose this on the basis that those most eligible to be targeted are Australians who’ve come here as migrants (being more likely to have dual citizenship than multi-generational Australians).

It creates an element of doubt and contigency about becoming an Australian citizen, that people born here wouldn’t be subject to.

Every consideration of this government’s action – or even plans – identify them as a group of people so thoroughly wired to the 19th century that they are totally at a loss in the 21st. There is no longer any point to spending time criticising one particular blunder picked from a choice of infinite variety.
This government has turned Australia into a caricature of democracy and is doing our country irreparable harm. They simply must be stopped.

It would have worked in Toyland.