Colin Barnett is clearly not the electoral asset he once was, and he faces a fresher and seemingly very popular opponent in Labor leader Mark McGowan. 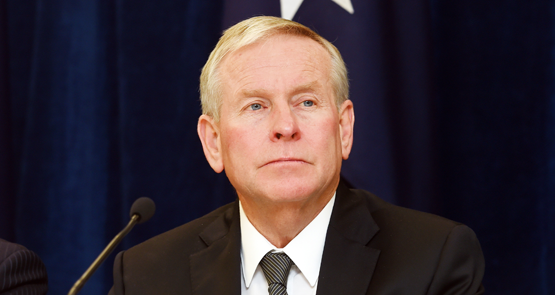 As Premier Colin Barnett’s government moves well into the business end of its second term, Western Australia’s state politicians are focusing their minds on an election now 18 months away.

A particular quickening of the tempo has been observable since draft redistribution boundaries were published a fortnight ago, posing a number of headaches for the conservative side of politics.

The Nationals are crying foul over the abolition of a regional seat, notwithstanding that the remorseless expansion of Perth’s suburbs made such an outcome all but inevitable.

The rearrangement is also having a destabilising effect on the Liberals, with a turf war threatening to break out over the deep-blue territory around Applecross in Perth’s inner south.

This area forms the power base of the ambitious Minister for Transport, Dean Nalder, but the redistribution proposes transferring it from his seat of Alfred Cove into neighbouring Bateman, held by Liberal backbencher Matt Taylor.

With the government facing a backlash over a proposed freight link that would feed traffic through his redrawn electorate on its way to the port of Fremantle, Nalder likes the look of the 23.2% margin in Toohey a lot more than the 10.8% margin in Burt, as Bateman and Alfred Cove are respectively to be renamed.

Nalder’s fussiness appears to have left colleagues unimpressed, with at least one venting their feelings through unattributed briefings to The West Australian on the weekend.

Efforts to bring Nalder down a notch are perhaps to be understood in the context of jockeying for life after Colin Barnett, and the lingering possibility that the transition will come before the next election rather than after.

During the government’s first term, succession talk mainly focused on Christian Porter or, on a good day, the man he succeeded in December 2010 as Treasurer, Troy Buswell.

Both have since departed the state political scene — for a shot at the federal big time in Porter’s case, and for a quiet life in Buswell’s.

In their absence, the field of contenders looks very much like a second XI, reflecting the difficulty the Liberals have had in securing and maintaining high-end political talent at state level.

Nalder briefly attained rising-star status by gaining the conservative Alfred Cove electorate from an independent in 2013 and securing a cabinet post a year later as Minister for Transport and Finance, but a conflict-of-interest controversy late last year cost him the latter portfolio, along with much of his prestige.

The government’s biggest policy heavyweight, Treasurer Mike Nahan, suffers a reputation for dogmatism born of his background as an executive director of the Institute of Public Affairs, and his electoral appeal is weighed down by an American accent he has been unable to shake off in the four decades since he emigrated from Michigan.

Nahan also carries the can for an economic record tarnished by revenue write-downs, which have fed into spiralling public debt, credit rating downgrades and the abandonment of big-ticket promises on public transport.

The leadership front-runner by default would appear to be Liza Harvey, who has emerged a contender on the back of a workmanlike performance as Police Minister, and the value she adds to the image of a party that remains male-dominated in both the party room and the cabinet.

Given Harvey’s slender experience of two terms in Parliament and three years as a minister, the general expectation is that Barnett, who has just turned 65, will saddle up for one last campaign with Harvey by his side as deputy, a position expected to be vacated shortly by Kim Hames ahead of his retirement at the election.

However, Barnett is clearly not the electoral asset he once was, and he faces a fresher and seemingly very popular opponent in Mark McGowan, who escaped most of the blame for the drubbing Labor copped under his leadership in 2013.

This is illustrated by the chart on the right below, which shows a trend measure of Newspoll’s net approval ratings for the two leaders since McGowan became Labor leader in January 2012.

What looked at first to be honeymoon ratings for McGowan have never gone away, whereas Barnett suffered a slump in support in the six months after his re-election in 2013 from which he hasn’t recovered.

Even so, the voting intention trend shown on the left, which is derived from both Newspoll and Roy Morgan’s monthly SMS polling series, suggests Labor has merely been breaking even since the Liberal lead vanished in the poll-free six-month period after the 2013 election — and the hard reality for them is that this would be unlikely to prove sufficient.

One problem Labor faces is a long-term trend against it in the state’s regional cities, which is very likely to cost it the Albany and Collie electorates when their popular sitting members move on, as both are thought likely to do in 2017.

That would leave Labor needing a swing of fully 10% in the metropolitan area to gain the required seats, which has only appeared in prospect at the very peak of its fortunes on the poll trend.

Certainly it’s true that the Liberals will face a much tougher environment than in 2013, when the reality of a fading mining boom had yet to sink in, and Labor had the weight of the Gillard government in its saddlebags.

But with WA seeming to have eclipsed Queensland over recent years as the most electorally conservative state in the nation, a third term remains Barnett’s to lose.