Andrew Bolt is not happy with his News Corp colleagues at The Australian. Plus other media tidbits of the day.

Bolt v Mitchell. News Corp columnist Andrew Bolt, who was pinged for racial vilification for claiming a group of high-profile Aboriginal people had sought advantage from the colour of their skin, has continued his war with The Australian this morning. He’s furious that for the second day in a row, The Australian’s Cut and Paste column has criticised his statements on the Adam Goodes saga. Bolt, a close reader of the Oz, said yesterday that the paper risked alienating its readership, which was at “serious odds” with the masthead over whether it was racist to boo Adam Goodes. “This is not the first time that I’ve wondered whether The Australian has lost its head and its direction,” Bolt wrote yesterday on his blog.

Today’s subsequent brush-up in the Oz has prompted Bolt to wax furiously on The Australian‘s direction. His post began by criticising the paper once again for its John Lyons exclusive alleging Tony Abbott had unilaterally considered sending troops to Iraq.

“As I said yesterday, The Australian’s behaviour is weak and contemptible, and I wonder once again whether its leadership has run off course,” Bolt wrote. “That story, never corrected or apologised for, was pushed by editor in chief Chris Mitchell. I know how it started and the terrible toll it took on the story’s alleged ‘source’.”

“Then came the paper’s repeated blustering and bullying — even a suggestion my editors silence me for my ‘poison’ – when I pointed out the dangers and plainly confused logic in its misguided support for race- based changes to the constitution. That cause is promoted fervently by editor in chief Chris Mitchell. Yesterday more of the same — The Australian doctored quotes from Miranda Devine and me to make it falsely appear we had contradicted ourselves over Adam Goodes. Weak and contemptible, and an apparent attempt to settle scores by joining in a media pack attack against its News Corp colleagues.

“Today The Australian responds to my exposure of its tactics in a way many people (not least Robert Manne) will say is typical of the paper under Mitchell — not by confessing error but by going in even harder.”

We hope The Australian continues to bait Bolt, if only to see whether the columnist comes out and properly calls for Mitchell to be sacked. He’s so close to suggesting that already. — Myriam Robin

Radio news cops it? From August 17, SBS will cut three-quarters of its World News radio programming, according to promos that began airing on SBS Radio 1 yesterday.

SBS has seven radio channels, but only SBS Radio 1 airs SBS World News Radio at 6am and 6pm. SBS hosts Anton Enus and Peggy Giakoumelos told their listeners that starting August 17, the 6am program will instead beam in the BBC World Service. At 6pm, a new half-hour World News program will air — replacing the current hour-long program.

SBS management has long threatened cuts to content should the SBS ad-averaging bill fail to secure passage through Parliament. While it’s not clear if the flagged changes have anything to do with that, the bill failed in June. —Myriam Robin

Book reviews a sausage fest. Do newspapers review as many books by female authors as they do by male authors? That is what the Stella Count seeks to find out — and in 2014 The Australian Financial Review and the Weekend Australian were the worst offenders for favouring books by male authors.

The Australian Financial Review’s results showed a slight improvement over last year, with 77% male authors and 23% female authors. In 2013, authors reviewed by the paper were 85% male.

This year’s count was expanded to include size of reviews, the genres most frequently reviewed and the nationality of authors. Overall, the 2014 Stella Count has revealed again that books by men are reviewed more often in the mainstream media than books by women.

Courier-Mail in breach. The Press Council has found The Courier-Mail in breach of its standards after the paper published its infamous “Monster Chef and the She-Male” front page about the murder of transgender woman Mayang Prasetyo. In an adjudication carried on page 2 of today’s Courier-Mail, the paper is found in breach for the prominent treatment given to Prasetyo’s gender, and the paper’s focus on her occupation. 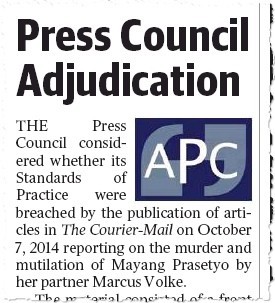 The Courier-Mail faced a very heavy backlash against the articles and front-page treatment, and apologised to its readers three weeks after the front page was published. — Myriam Robin

Clickbait diaries. For years, writer Glynnis MacNicol survived by writing clickbait. She’s not proud of it. In a piece for Elle, she writes about the internet’s endless capacity for meaningless content:

“The thing I had once most valued had become my biggest source of shame. That I could say I was a writer, but never produce what I considered to be good writing, left me feeling like a fraud. And even more confusing, the worse my output the more I was rewarded for it. So even though I felt bad, I felt even worse for feeling bad because it was making everyone else feel so good.”

Since November last year, Trinity Mirror has closed 18 newspapers and opened one. It has merged two newspaper websites in northern Britain and sacked dozens of people, mostly journalists, on various papers across the country. The company has a target of 20 million pounds in cost savings by the end of this year — so having saved 7 million pounds in the first half, its cost-cutting efforts will have to redouble this half. And, unless there’s a pick-up in print ad spending, the cost cuts won’t be enough. So more jobs to go? And what will the fourth-quarter and full-year reports for News Corp reveal next week for News UK?

Trinity Mirror, like other UK publishers, said the print revenue environment as “challenging” in the June half. It said that in the print national advertising market there has been a “slowdown in retail spend, in particular supermarket, but also reduced spend in telecoms, motors and entertainment categories”. — Glenn Dyer

Front page of the day. Revenues may be sliding, but it was a good day for the Mirror scoop-wise … 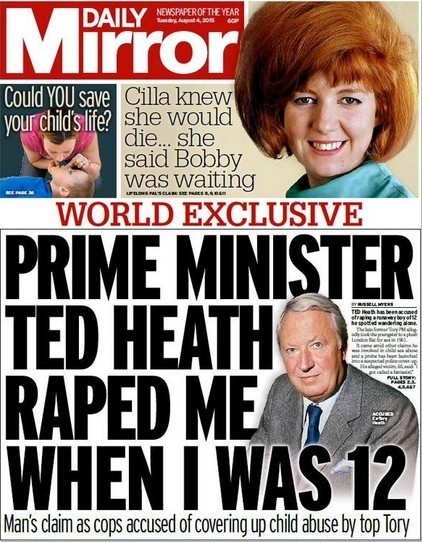 News Corpse columnist baits News Corp paper – we shouldn’t really be interested in this except it does show up how truly pompous some people are.

“Blot the Expert” = “The Life of Brian is film that mocks Christ as “just a naughty boy” – why wouldn’t he know exactly whatever he’s blathering about?

Anything that might result in Blt being in fewer mudorc outlets would increase the common weal. Better still, he may flounce off entirely!

It’s sad how those who can’t match Bolt’s intellect gain revenge by pretending they can put him down; but we’re in Crikey Land so it’s par for that course.