Prime Minister’s media wrangler departs. Kate Walshe, who has been in Prime Minister Tony Abbott’s office since the election, has resigned and finished up on Friday, Crikey can reveal. Walshe is the third big departure from Abbott’s office in recent times, and she has worked in Liberal ministers’ offices for over a decade, including for Kevin Andrews, Julie Bishop and Ted Ballieu. Most recently Walshe was reported to be responsible for booking all ministerial media appearances when Abbott decided to impose a ban on his ministry appearing on Q&A. The Bronwyn Bishop scandal has largely taken attention off what became the never-ending Zaky Mallah saga, so maybe it was a good time for a quiet exit?

Abbott’s office confirmed Walshe had left on Friday. When asked why she left, a spokesperson for the prime minster’s office told us it was “none of [our] business”.

Indiwatch: trivia edition. Former MP and Liberal candidate for Indi Sophie Mirabella is continuing with her apology/listening tour in the Albury-Wodonga region ahead of the next federal election. Often criticised for not spending much time in her electorate, Mirabella now seems keen to get among the people. Our ears on the ground tell us that Mirabella’s team won the local Wodonga hockey team’s trivia night on Saturday night by one point. She’s used to close calls — she lost the seat to independent Cathy McGowan by just 439 votes.

Breaking down the doors for Pyne. Crikey was unceremoniously disinvited from Education Minister Christopher Pyne’s book launch in Melbourne on Friday night, and it appears we missed quite some drama. A protest from the National Union of Students outside the event in the NAB building in Docklands resulted in the front door of the building “being smashed into 1000 pieces“, to quote the minister. The head of the Liberal Students Federation, Matthew Lesh, who was said to have secured hisposition as general secretary of the Victorian branch of NUS on preferences to block out Socialist Alternative, put out a press release condemning his own union’s protest action. Lesh argued that a book launch wasn’t an appropriate place to protest. 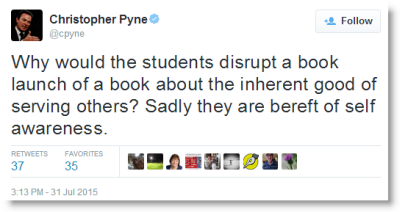 Springborg is most definitely not running for Maranoa. We hear from a tipster: “Lawrence Springborg has posted a Facebook tribute to retiring federal MP for Maranoa Bruce Scott. The web video follows months of speculation that Springborg will replace Scott as Maranoa’s representative in federal parliament.” When contacted by Crikey, his office could not strongly enough reject suggestions that he might be running for the seat. Springborg put out a statement this morning explicitly stating he would not be standing for Maranoa. 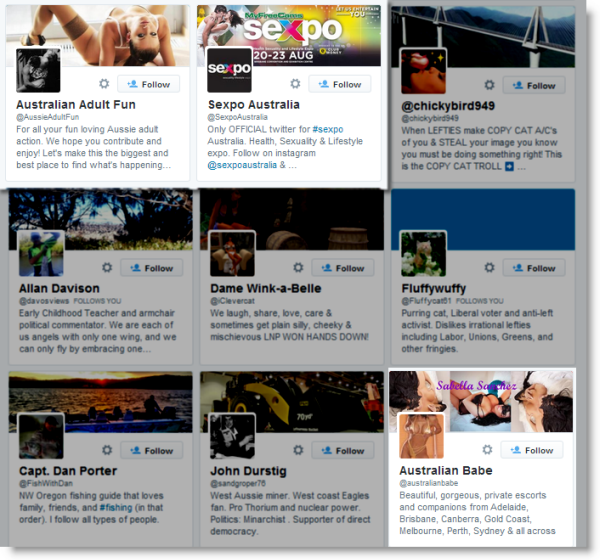 New kids on the marriage block. Both SBS and the ABC evening news covered a new anti-gay marriage group, Marriage Alliance, last night. Not much is known about this new group, except that it is backed by former investment banker Jim Dominguez and former Liberal Party president Ashley Goldsworthy.

The group’s website has an ominous countdown clock timed for a launch for tomorrow morning. Maybe we’ll know more then?

If only Bronwyn had taken her own advice. In 2011, the then-shadow special minister of state demanded to know if then-foreign minister Kevin Rudd had been told to keep costs associated with his travelling down. If only the shadow minister, Bronwyn Bishop herself, had been paying as much attention to her own travel expenses.

Farewell to the Bronny memes. We will miss the whole creative industry that spawned in reaction to the Bronwyn Bishop expenses scandal, but her resignation as speaker did earn a few final jokes overnight, with some tweeting tribute photos of their wallets along with the hashtag #putyourwalletsout. 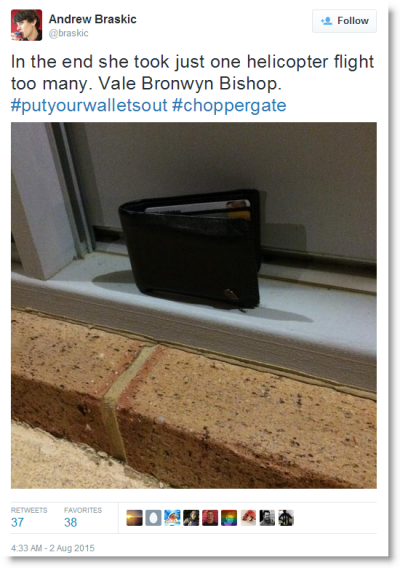 Who can believe it was just seven weeks ago that Bishop was the one calling on Human Rights commissioner Gillian Triggs to resign? Seven weeks is a very, very, very long time in politics.