The Australia Council’s submission to a Senate Inquiry reveals the scale of duning changes imposed by George Brandis’ Excellence program. 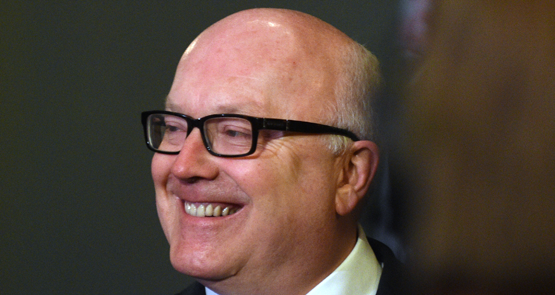 The Senate inquiry into Arts Minister George Brandis’ controversial changes to arts funding opens this week. There could be some uncomfortable moments for the beleaguered Arts Minister and his Excellence adventure, now that the full scale of the changes to the Australia Council’s funding profile has been revealed with the publication of the council’s submission to the Senate inquiry on Friday.

With hearings kicking off in Melbourne on Wednesday and then travelling around the country, the sketchy evidence and ramshackle process underpinning Brandis’ Excellence raid is sure to be put under considerable scrutiny.

The Senate inquiry, voted up with unanimous support from non-Coalition parties, will be chaired by maverick ex-Palmer United Senator Glenn Lazarus. It will probe the circumstances and rationale behind Brandis’ sneak attack on arts funding, in which he moved $105 million from the Australia Council to the new National Program for Excellence in the Arts, which Labor has described as a “slush fund.”

Brandis made the move without even telling the Australia Council beforehand. The unprecedented move has already forced major disruptions to the arts sector, with the confirmation last week that the Australia Council would abandon its six-year funding for organisations, replacing it with a four-year process and a much-reduced grant pool.

The Australia Council submission reveals that funding programs to individual artists and arts projects will decline by more than half this year, compared to 2013-14 levels.

All up, the Australia Council has had $123.3 million, removed by the various decisions taken by George Brandis at the budget. This includes the $105 million from the Excellence raid, as well as $6 million for Books Councils (details of which are still forthcoming) and $7.3 million in efficiency cuts.

The Australia Council’s appropriation will fall to $184.5 million this year, down from $211.7 million last year. But with $107.7 million quarantined for the major performing arts sector, the council’s discretionary budget is down by 34.8%.

A figure in the submission spells it out. 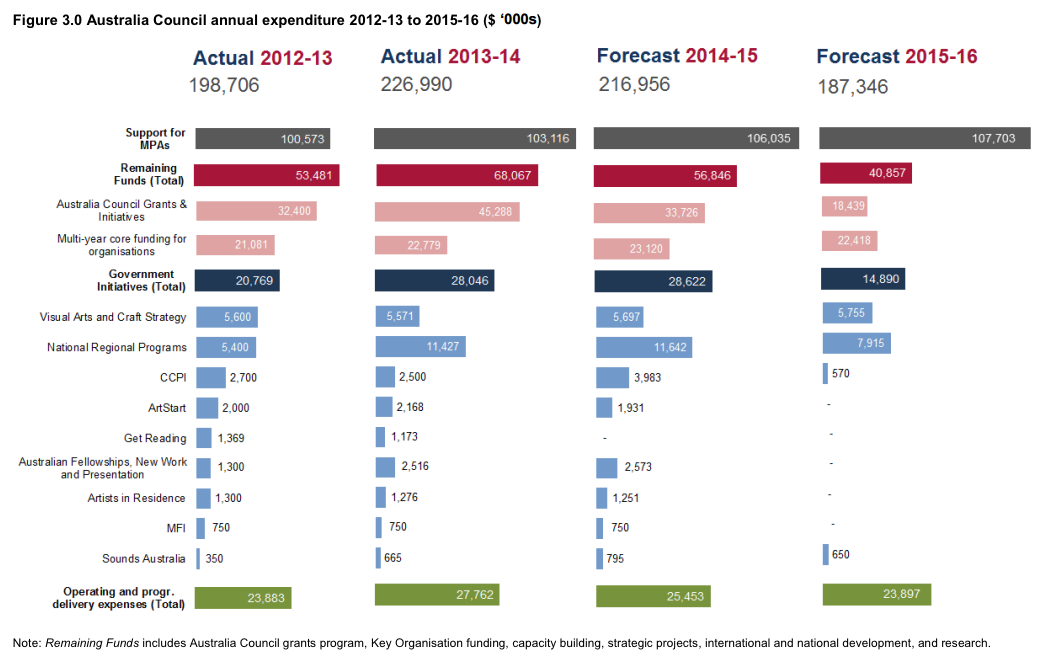 Figures from its Senate submission show the Australia Council’s funding reductions will mainly affect “Australia Council grants and initiatives” — in other words individual artists and projects. Source: Australia Council submission to the Senate inquiry into the “Impact of the 2014 and 2015 Commonwealth Budget decisions on the Arts”. Click through for bigger image.

The figure reveals the pain will fall mainly on individual artists and cultural projects. A number of categories have been killed off altogether, including fellowships for artists making new work, artist-in-residence programs, and ArtStart, the Australia Council’s dedicated program for emerging artists.

The 2015-16 figure for the small-to-medium sector looks better than it is, because funding in the coming financial year for key organisations is already locked in. No figures are provided for 2016-17 and beyond, but given the austerity baked into the budget changes, these are likely to be smaller again.

Hence, when the Australia Council reopens submissions for the small-to-medium sector later this year, for a four-year round beginning in January 2017, those applicants will almost certainly be competing in a smaller funding pool. We don’t know how much smaller, however.

Reading through some of the other submissions published so far is quite something.

The response from artists and arts organisations to the Senate inquiry has been overwhelming. More than 2200 submissions have flooded in. The avalanche has been so great that besieged parliamentary staffers are still uploading them.

There are more than 2000 submissions to the Senate inquiry still to be uploaded. But if the ones published so far are representative, they add up to a wholesale repudiation of Brandis as arts minister.

Nearly all submissions to the Senate inquiry published so far are critical the NPEA and the savage attacks on Australia Council funding that have resulted. In page after page, prominent artists and organisations rail against Brandis’ actions.

The Australian Centre for Contemporary Art writes that the “the Ministerial decision to move monies from the Australia Council budget to the newly announced NPEA has caused immense anxiety within the arts sector”.

“The Australia Council’s six year funding strategy, which has been years in the making, has been dismantled by a hastily conceived redeployment of funds,” ACCA adds.

Chloe Munro, the chair of Melbourne dance company Lucy Guerin Inc, writes that “the cuts to the Australia Council put extraordinary pressure on artists, funding agencies, philanthropic trusts and private donors across the country to bridge the gap”.

Regional Arts Victoria argues that “the loss of funding for the Australia Council multi-year organisations program is the single biggest impact of the changes to the arts budget in 2015-16”.

A repeated refrain has been the waste of time, money and energy represented by the cancellation of the Australia Council’s six-year funding round.

Well-known Brisbane arts accountant Brian Tucker writes that “almost every organisation I am associated with had spent the previous weeks and months preparing Expressions of Interest (EOI) for [the Australia Council] in the hope of securing an offer of longer term funding certainty”. Instead, Tucker laments, “most of the intellectual and financial capital expended has been a complete waste”.

One of the best submissions so far is from respected Melbourne critic and novelist Alison Croggon. Her piece is passionate about the role of artists in the development of Australian culture, pointing out that individual artists will not be allowed to apply to the new Excellence program.

“All art is created by individuals,” Croggon argues. “Instead, individual artists, who already substantially fund the arts through their unpaid work, will be forced to compete in a diminishing pool.”

“This means that these cuts disproportionately affect those who can least afford it. In particular, it will affect writers and visual artists, who tend most to work alone.”

Meanwhile, the impact of the Australia Council raid continues to reverberate around Australia’s diverse arts industry.

Over the weekend, the Underbelly Arts Festival was held on Sydney’s Cockatoo Island. Sydney’s premiere festival of experimental and emerging arts, Underbelly features more than 150 artists from around Australia, most of them at early or middling stages of their careers. Artists appearing included avant-garde choreographer Atlanta Eke and Swiss performance duo Gregory Stauffer and Bastien Gachet. It’s a bewildering array of talent that demonstrates just how much creativity resides outside the established parameters of big galleries and major performing arts organisations.

And yet Underbelly Arts, too, wasted time and energy in the doomed six-year funding round abandoned by the Australia Council.

“I am really concerned about the Australia Council changes,” Underbelly Arts’ artistic director Eliza Sarlos told Crikey in a phone interview on Friday. Sarlos says Brandis’ new Excellence Program “fails to recognise the incredible commitment that artists have to show for a long period of time before they can show at a major gallery or in one of the major performing arts organisations”.

Sarlos points out the effects of the current Australia Council cuts, which fall most heavily on emerging artists and smaller companies, will not be felt for “five to 10 years”.

“It will have a significant impact on how we develop culturally as a nation,” Sarlos warned.

Rather pointedly, the festival featured a panel on the future of Australian cultural practice on Sunday, entitled “The Necessity of Tomorrows“. It’s never been a more important topic.

A healthy, contributing Arts Sector should always be to refresh, challenge the People.

“Time” for a new catchy jingle?

That a personality so obviously devoid of artistic flair be made the Arts Minister speaks volumes for this government.

re:mikehilliard
Yes, actually one may wonder what are the artistic circles the curent Arts Minister is familiar with?