Andrew Bolt lectures The Australian on media ethics. And other media tidbits of the day.

Shades of Kim. It’s a week on from the surprise departure of Hamish McLennan from the role of CEO of the Ten Network and there’s been no exit interview anywhere, not even in this morning’s media section of The Australian, which is where the retiring senior executives are given a final say, and their replacements, a first-up interview. In fact, there’s been a dearth of interviews with McLennan’s replacement, Paul Anderson. The only person from Ten to put their head up has been the new chairman in Sydney lawyer and long-time Ten director, David Gordon. His “exclusive” interview in the Oz’s media section this morning contained not one comment about McLennan’s surprise departure a week ago and why it happened. A glaring omission.

The disappearance of Hamish McLennan and lack of any realistic explanation for the change has clearly puzzled long-time News editor and now media writer Mark Day, whose column in the media section of the Oz this morning was headlined “McLennan’s sudden exit as Ten chairman makes no sense”. He went on to discuss three reasons for the departure (it’s actually McLennan’s departure as CEO that makes no sense at this time, not his departure from the chairmanship, which was always going to happen under the deal with Foxtel announced in late June).

The first was based on McLennan’s comment that his work at Ten was completed. Day writes this “makes little sense”. Then there was the idea that McLennan departed to sanitise the links between the Murdochs/News Corp/Foxtel and Ten, to allay the ACCC’s concerns over the slated Foxtel-Ten merger. Day says that while this idea is “enticing to conspiracy theorists … it simply doesn’t hold water”. And then there are claims that McLennan’s presence on the board and as CEO meant that Lachlan Murdoch was breaching the ownership and control provisions of the Broadcast Services Act. Day says the act is very complex and there are a number of tests to be applied to “determine actual control, as well as deemed or implied control.”

So, in the end, Day can’t tell us why the change happened, and a week on, Hamish McLennan has not appeared in print to explain his departure other than what was said in the Ten statement a week ago (which Day rightly dismisses). The latest departing senior executive to leave a yawning gap in the public record in News Corp papers was Kim Williams, who was disappeared two years ago this week on August 8. — Glenn Dyer

All in the family. The Australian stands accused of “deceptively abridging” quotes to engage in “weak and contemptible smearing” of a respected public figure. Or so says Andrew Bolt, in one of his three or four defences of his Adam Goodes comments posted to his blog this morning.

The first, posted at 7.35am  is a response to The Australian’s Cut and Paste today, which makes fun of the Bolter’s logical contradictions on whether or not Goodes was right to point out a young girl who racially abused him at a match two years ago. Bolt seems to have held both positions at different times over the past few days, but he says only a selective reading of his comments supports that hypothesis.

“This is not the first time that I’ve wondered whether The Australian has lost its head and its direction. The fact that it is increasingly at serious odds with its readership,” Bolt warns his Holt Street colleagues.

Later, he notes Miranda Devine has been similarly mocked. “What the hell is going on with that paper?”

Frankly, The Australian‘s criticisms of Bolt seem gentle besides the pasting he was given last week by former Daily Tele editor and now Advertiser columnist David Penberthy. The Adelaide-based journo wrote:

“Andrew Bolt seems to live in fear of being hit with an imaginary spear. He describes imaginary spear-throwing as dangerous and violent conduct. He wrote this week that Lewis Jetta and Adam Goodes could incite a race war. Coming from Andrew, that’s not a criticism. It’s a demarcation dispute.”

HuffPo less than a month away. The Huffington Post will launch in Australia on August 19.

The global media outlet, launching in Australia through a joint venture with Fairfax, has secured new digs in Sydney’s Circular Quay, The Australian Financial Review reported this morning. It’ll lift off with 30 staff, all of whom will be expected to write content, most targeted at Australian audiences.

Leading the team is former News Corp editor Tory Maguire as editor-in-chief. The other high-profile hire is former ABC/SBS broadcast journalist Karen Barlow, who’ll write on politics for the title, which will also draw on content from The Huffington Post‘s global network of 900 journalists.

Last month, the title was criticised after one of its editors contacted ad creative and author Dee Madigan to blog for the title for free. The outlet’s American-based senior head of communications told Crikey The Huffington Post was both an outlet and a publisher, and thus many people were happy to write for it for free, to reach a wider audience. — Crikey intern Tahlia Higgins

She’s gone. It took nearly three weeks, but today’s papers are all crowing about the resignation they (particularly the Herald Sun) helped achieve. 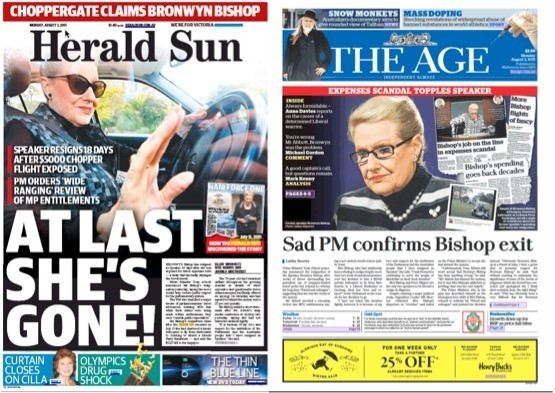 “Four nights a week for sixteen years, Jon Stewart, the host and impresario of Comedy Central’s The Daily Show, has taken to the air to expose our civic bizarreries. He has been heroic and persistent. Blasted into orbit by a trumped-up (if you will) impeachment and a stolen Presidential election, and then rocketing through the war in Iraq and right up to the current electoral circus, with its commodious clown car teeming with would-be Commanders-in-Chief, Stewart has lasered away the layers of hypocrisy in politics and in the media. On any given night, a quick montage of absurdist video clips culled from cable or network news followed by Stewart’s vaudeville reactions can be ten times as deflating to the self-regard of the powerful as any solemn editorial—and twice as illuminating as the purportedly non-fake news that provides his fuel.”

Video of the day. Al Jazeera devoted half-an-hour to the Adam Goodes saga on its daily Inside Story program … 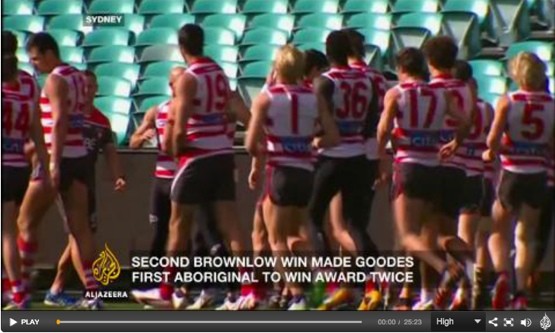