Unlike John Howard, who was also damaged by Bronwyn Bishop, Tony Abbott doesn't seem to be learning from his mistakes. 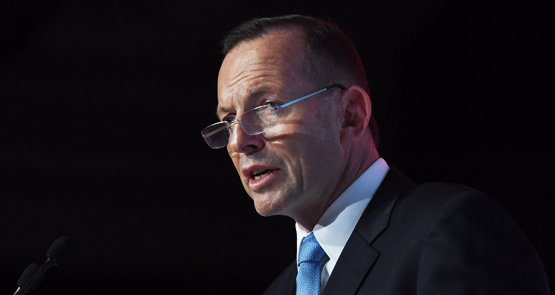 The Abbott government isn’t the first government Bronwyn Bishop has damaged. She’s never lived down the “kero baths” label from her stint as aged care minister, which ended with the 2001 election.

The Howard government overhauled aged care funding in 1997, while Bishop was still junior defence minister. Many of the problems in the sector predated those changes. Handled properly, what started as revelations of disgraceful standards at one nursing home, Riverside in Victoria, need not have been badly damaging. But Bishop tried to keep them quiet after she became aged care minister in 1998, then was forced to shut the facility, and soon there was a torrent of news about wretched conditions in aged care facilities across the country, including elderly patients dying of gangrene and dehydration. Links between Howard, the Liberals and nursing home mogul Doug Moran hardly helped. Eventually there were backflips and reversals — including a reversal of the cuts to the aged care standards body, which had suffered a big funding reduction in the early Howard-Costello budgets.

Howard was so impressed with Bishop’s handling of the crisis that he dumped her after the 2001 election, and she never graced the ministerial wing of Parliament House again. If nothing else, Howard was an acute judge of political talent.

It doesn’t look like Tony Abbott absorbed that lesson. Two men whom Howard had no time for, George Brandis and Christopher Pyne, are senior ministers. Pyne, in Parliament since 1993, was ignored by Howard until the very end of his government, after Howard was forced to dump Santo Santoro from aged care. That Howard would have appointed someone like Santoro ahead of Pyne speaks volumes for his estimation of Pyne, who promptly confirmed that judgement by declaring he was “too young” for the aged care portfolio and would prefer foreign affairs. Nor did Howard share Brandis’ belief in his own genius, or appreciate being openly called “the rodent” by the Queensland senator (who always denied calling Howard “a lying rodent”). Brandis only got the junior arts portfolio late in the Howard years.

Under Abbott, Brandis has been a serial bungler and has been stripped of his counter-terrorism responsibility. Pyne badly botched the critical higher education reform package and, something that is now forgotten, was the author of the first debacle of the Abbott government, its abandonment of the Gonski school funding reforms shortly after it was elected. But unlike Bishop, both still hold their jobs.

Abbott’s version of the travel entitlements scandal is that Bishop is a victim of a system that is at odds with voter expectations. In fact the problem with the travel entitlements system is the lack of clarity. “The parliamentary entitlements surrounding travel are arguably the most complex, confusing and difficult to understand both for senators and members and those who administer the entitlements,” a 2010 review, overseen by former senior public servant Barbara Belcher, concluded. Politicians thus need, as Malcolm Turnbull correctly observed today, to use common sense — and, one assumes, some basic ethics. The result is that some push far beyond what is acceptable.

Abbott is thus right to conduct a review — one of the members, Remuneration Tribunal president John Conde, was on the Belcher committee as well — but wrong to suggest the system is the problem, not “any one individual”. Few MPs take advantage of the travel entitlements system as egregiously as Bishop did.

And while Howard showed that he’d learnt from his mistakes, it doesn’t look like Abbott is learning from his. The Bishop saga played out exactly as a number of other Abbott misjudgements have played out — the initial stonewalling, then the shift to recognise the political damage being done with a token adjustment or change (Bishop being “put on probation”), continuing damage that angers colleagues and raises questions about the Prime Minister’s judgement, then a humiliating backflip or abandonment, usually shortly after some luckless frontbencher has only just finished taking fire in defence of the government’s position.

With Julie Bishop and Scott Morrison having vacated the field and Joe Hockey having whacked Bishop early on in the piece, yesterday it was left to Barnaby Joyce to join Christopher Pyne on the barricades. Being Joyce, of course, we weren’t given by any means a pro forma response: he was soon opining about “ladies” needing someone to help them drive (Joyce presumably doesn’t talk much to Sussan Ley, who flies and drives herself tens of thousands of kilometres a year around her vast electorate).

Now, with Bishop gone, Abbott has to rebuild his government again. Given the amount of practice he’s had, he should be getting better at that, if nothing else.

It hadn’t occurred to me that Howard had shunned Brandis and Pyne. Obviously a better judge than Tony.

So how did Pyne get to be leader of the house so quickly, normally a job that goes to someone with tactical nous and preferably a voice and facial mannerisms that don’t make you want to punch the television/computer?

Re the travel entitlements, sure I bet there are plenty of complexities in there, and has probably been appropriately written to allow discretion, but as you say, Ms Bishop was the problem, the system much less so.

That’s a little too much discretion, and why someone needs a limo when a taxi is just as efficient, has yet to be explained.

Another sterling piece, Bernard, with gracious reminders of who andy why Brandis and Pyne were and are.

I sis just me, or is there a subtle shift in the ground around Abbott, predating even the awful Bronnie’s exposure for the guzzler she is? Turnbull, of course, and the other Bishop, with some subtlety and adroitness, differentiating themselves from the PM as humans of some substance. But also the odd back-bencher emboldened to speak out, and maybe fill the void left by the untimely demise of Don Randall?

And yet our “Curry or Maul” – our local chapter and verse of the Limited News Party Appreciation Society and Kennel Club told us just yesterday that “Speaker Bronwyn Bishop has had a distinguished and splendid political career….”?

“Driving Miss Gravy” – isn’t the paramount prerequisite for letting your conscience be your guide, is to have one?