Bronwyn Bishop has resigned as Speaker, long after it became clear that her position was untenable. 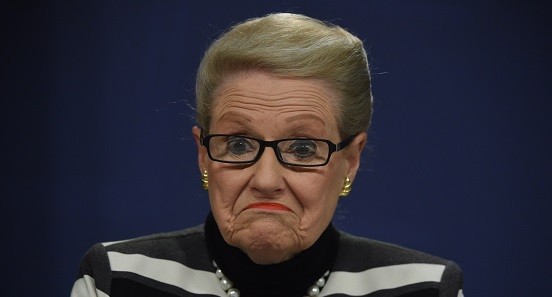 Belatedly recognising the damage the ongoing scandal of Bronwyn Bishop’s misuse of her travel entitlements was doing to him and his government, Tony Abbott has announced the Speaker’s resignation and a root-and-branch review of parliamentary entitlements. The decision comes after more evidence had emerged this morning of Bishop’s extravagant use of limousines and chartered aircraft in News Corp papers, but the announcement is just hours after another government minister, Barnaby Joyce (who has had his own troubles with travel entitlements), defended Bishop, saying the Speaker was “a lady who probably, especially when things are busy, it’s not unreasonable that she will have someone help her drive to whatever job she’s got”.

With journalists poring through her travel records, it has been evident for several days that the steady drip of stories about Bishop’s enthusiasm for expensive travel for matters unrelated to her official duties was going to continue and that Bishop’s position as Speaker was simply untenable. Abbott, who is personally, ideologically and even geographically close to Bishop (their electorates adjoin), appears until today to have believed the scandal would blow over. In a remarkable move, the Prime Minister in effect went underground for several days in order to avoid commenting on the issue, allowing the scandal to dominate the political agenda and damage the government.

Abbott’s decision to engage the former head of the Department of Finance David Tune and current Remuneration Tribunal president John Conde to conduct a comprehensive review of the current parliamentary entitlements system is a good one: the current system is far too easily rorted, with the only accountability in effect provided by the media or by political opponents game enough to risk collateral damage to their own side by raising abuses that many MPs engage in.

However, the belated nature of Abbott’s realisation that Bishop was finished raises significant questions about his judgement. The whole affair has played out exactly as a number of other Abbott misjudgements have played out — the initial dismissal of any issue, then the shift to recognise the political damage being done with a token adjustment or change (Bishop being “put on probation”), continuing damage that angers colleagues and raises questions about his judgment, then a humiliating backflip or abandonment.

Political hardheads in Abbott’s party — if not in his office — could have and probably did tell him Bishop entirely mishandled the scandal from the outset (to this day she has insisted all her claims were within entitlements, something that may yet be tested in court) and that in doing so she was damaging not merely her own prospects of retaining the Speakership but the party and the government, of which she remains a high-profile member, despite the pretence of independence attached to the role. But it was not until the scandal began raising questions about Abbott’s own authority and judgement that he moved to act.

As for Bishop, good riddance. The one-time senator who used Senate estimates to demonise public servants for merely doing their jobs, the ambitious woman convinced she was a Liberal Party messiah who lost votes when she transferred to the lower house, the minister John Howard dumped after the kero baths scandal and never let near ministerial office again, the Speaker so blatantly partisan she made Leo McLeay look balanced — her departure takes nothing away from public life. The only positive thing she could achieve for her party and the Parliament now is to leave politics and allow her safe seat to be taken by a Liberal of genuine talent.

Evading the pink Slipper — or, how to get away with (political) murder

Actually Bernard, in the greater scheme of things, the best thing Bronwyn Bishop could do for her country, is follow Rudd’s example and destroy a sitting PM.
That would be a true public service

…something that may yet be tested in court

We need not hold our breath with the Australian Federalista Police doing anything much and if they do I predict a whitewash. Remember how Kelty was forced into a retraction by Howard over war causing backlash? The AFP has form going after people for the sitting government’s political advantage ie Haneef. The position comparing Slipper to Bishop?

The AFP appears totally under the thumb of the sitting government when it comes to their own, and maximum belligerence and prosecutions when it comes to their political enemies. The only federal institution I have respect for is the Cth DPP, they have a good habit of calling a case as they see fit, eg Haneef (advised WTF)

Anyone could foresee the day the helicopter story broke that Bishop’s position would become untenable; anyone but Abbott. What does it take for his colleagues to realise he’s just not up to the job of leadership?

The discussions to put up some challengers to Bronwyn in Mackellar are already underway.
There’s some good talent and this 72 year old should move on.
Watch this space! preselection won’t be the Bronwyn show.