Who owned the suitcase found next to MH370 debris?

The question of what happened to Malaysia Airlines flight MH370 just gets more mysterious.

A suitcase has been found in the same area of La Reunion island where a part of an airplane wing, suspected of belonging to missing Malaysia Airlines flight MH370, was found yesterday.

The photo below is from the Clicanoo French-language news website in Saint-Denis, the main town on the Indian Ocean island near Mauritius. 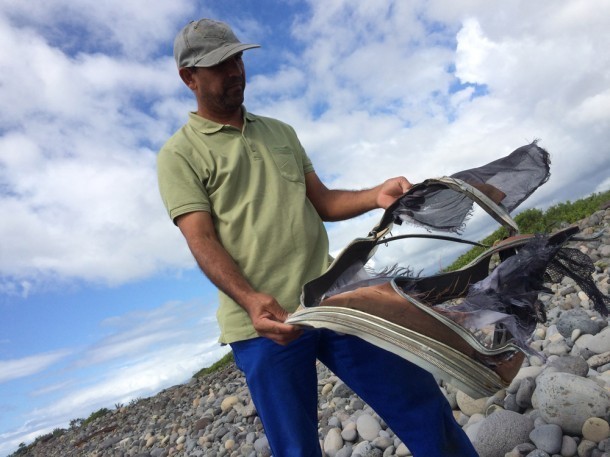 The story says that:

“Yesterday, Johnny Begue was leading a conservation team in a clean up when he found what might be part of the missing 777.

“But this morning, on returning to the scene there was another surprise. M Begue found the remains of a partly rusted but partly sealed wheelie carry-on suitcase.”

Its significance is obvious. A major recovery operation of what could prove to be items of passenger luggage as well as parts of the Boeing 777-200ER almost certainly from MH370 is about to take place on La Reunion.

The aircraft vanished from radars while it was over the Gulf of Thailand in March last year.

Using clues drawn from military radar traces and “pings” from an automated system on board the jet, MH370 flew for seven hours 39 minutes until its fuel ran out somewhere over the Indian Ocean at a point where a geo-synchronous Inmarsat satellite had to be 44 degrees above the horizon.

That was not therefore close to La Reunion where the satellite would have been higher in the sky when it heard MH370′s last “ping” but where the debris has come ashore.

The Australian-managed, Malaysia-directed seabed search for the heavier and denser parts of the Boeing 777 is concentrated along an arc across the south Indian Ocean south-west of Perth. A search zone recently expanded to a total of 120,000 square kilometres has already been half covered by towed-side scanning sonar devices with spot searches by autonomous submersibles.

What happens in La Reunion will be done by France, in its own way. A team from Malaysia is on its way to Toulouse where the French air safety investigator, the BEA, has taken the wing section discovered on Wednesday. It is believed to be a flaperon, a trailing edge device unique to Boeing 777s.

Until this week, not a single item identified as coming from MH370 had been recovered.

That was then, this is now: what Tony Abbott knew of MH370