Bernie Finn very concerned about uteruses and shirts ... Is Joe Hockey partying in Bendigo? ... and which pollie is partial to fluffy restraints? ...

A dedicated follower of fashion. Victorian upper house MP Bernie Finn, known mostly for his views on abortion (he is against), but now he’s decided to weigh in on the sartorial choices of AFL players. Finn is a supporter of the Richmond Football Club, which announced yesterday that its players would be wearing their jumpers from the indigenous round in support of Adam Goodes. He posted his opposition to the move in a Facebook group for club supporters last night:

He went on to argue with other commenters, saying, “If people want to argue the point about Australia’s history, there are places to do that. The G on Friday night ain’t one of them!”. While Finn is keen to defend himself against political correctness, it’s interesting to note that this isn’t his first attack on the club wearing an indigenous guernsey. In 2011, when the jumpers were first introduced for Richmond’s Dreamtime match against Essendon, Finn called the artwork “graffiti” and said the jumper was sacred. “It shouldn’t be interfered with for any reason. A football club’s jumper is like the nation’s flag. Leave them both alone.” While the players can change their stripe to show support for another player, leopards never change their spots.

What do you guys think? Last month we reported that Liberal MP for the seat of La Trobe Jason “Genetically Modified Orgasms” Wood had been banning comments from people who were asking him for his views on same-sex marriage, and he told us that he was looking forward to hearing from his constituents before making up his mind on how to vote on the issue. Yesterday he told his followers on Facebook that almost 4000 people had taken his survey on the issue, with 57% of respondents supporting a change. It’s good to see an MP doing what he told us he would do — it also means we’ll be watching him closely if the Liberals are allowed a conscience vote on the issue.

Many happy returns. Treasurer Joe Hockey will celebrate his 50th birthday on Sunday, and a tipster tells us there is a party to be held for our esteemed Treasurer in Bendigo this morning. It seemed unlikely to us but we called his office anyway, and were told staff didn’t know about the Treasurer’s plans for the occasion.

A bromance like no other. It’s a big week for book launches, and it’s hard to turn on a television or a radio without hearing about a memoir or biography by a conservative journalist or politician. Gerard Henderson has been doing the rounds to promote his tome on the life of B.A. Santamaria, even spending half an hour with Phillip Adams on Radio National last night — Adams described the book as a “ripsnorter”. It was a friendly chat, probably helped along by the fact that Henderson turned up bearing chocolate and flowers, which he mentioned as soon as he was on air. At one point Adams said “that’s when we used to be friends” and seemed to hope that friendship was back on the table. Hendo said: “One day, Phillip, you never know, if you like the chocolates and stuff it will go well”. It ended with Adams saying the two were about to go out on the town and get sloshed together. Now that’s a pub test we’d like to see.

Use your own bin. A caller to 3AW this morning had quite the scandalous story, saying that a senior Victorian politician had a cleanout at his house in the inner suburbs and also put some of his rubbish in his neighbour’s bin. The caller says that on closer inspection, the rubbish included two toys — one of which involved some fluffy restraints. Surely it’s too good to be true?

Bulletin Bishop. Labor MP Michael Danby has a gift for Speaker Bronwyn Bishop, which we’re sure she won’t be keen to see when Parliament goes back in a week. 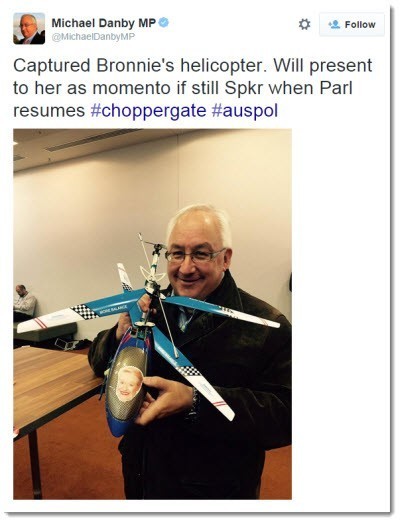 Speaking of Bishop and choppers, this old edition of The Bulletin has popped up this week — and look what’s in the background. It reminds Ms Tips of the saying “fashions may go out of style but style never goes out of fashion” — and Bishop sure travels in style. 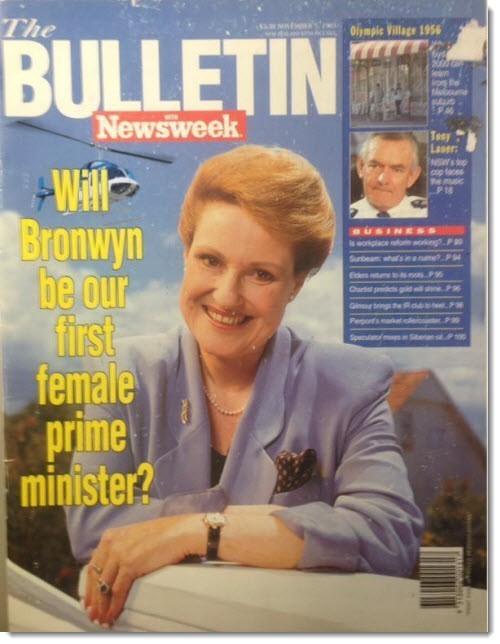