Bronwyn Bishop's fondness for helicopters has won her an enormous amount of media coverage, particularly in the tabloid press and on talkback. 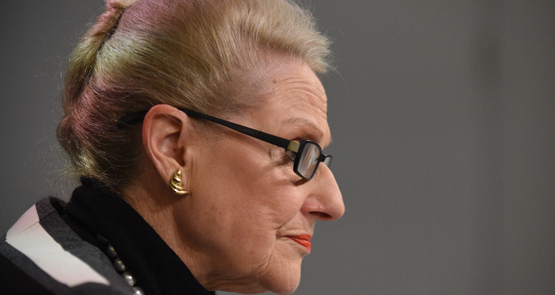 In the two weeks leading up to yesterday’s apology, the outlet that has run the hardest and most consistently on the scandal has been Sydney’s Daily Telegraph, according to a breakdown of articles mentioning Bishop provided to Crikey by media monitoring company iSentia. In broadcast, the commercial TV networks have run far more stories on Bishop in their news bulletins in the past two weeks than the ABC and SBS have. On radio, populist stations 2UE and 2GB have mentioned Bishop more than any others by a significant margin.

Throughout the media, coverage of Bishop in the past two weeks has been unyielding and pervasive. In the week after the story broke, the Speaker had more mentions across the media than both the Prime Minister and the Opposition Leader, with 32,785 total mentions across all media (including syndication) in the week to July 22. The last time the Prime Minister was kicked off first place was in budget week, when Treasurer Joe Hockey had more mentions. By week two of the saga, the ALP national conference assured Bill Shorten topped the index. In the week to July 29, Bishop had 5759 media mentions.

Unlike almost any other scandal or criticism involving the Abbott government, critical coverage has this time been heavily concentrated on the most popular, tabloid elements of the press.

The Herald Sun broke the helicopter flight story on July 15 (on page 5 — the front page was given to zombie Bill Shorten and his ‘carbon tax’). But in the two weeks to July 30, The Daily Telegraph has run more stories on Bishop and given them more prominent placement in the newspaper. The Tele ran five front pages and 86 articles on Bishop over the two weeks, while the Herald Sun ran 74 articles but only one front pager. The third paper to keep covering the scandal was the Adelaide Advertiser, which ran 68 articles and four front pages mentioning Bishop between July 14 and July 30.

Giving the scandal somewhat less prominence were the national papers. The Australian ran 43 articles on Bishop over the period (three on the front page) while The Australian Financial Review ran only 15 (one front pager). 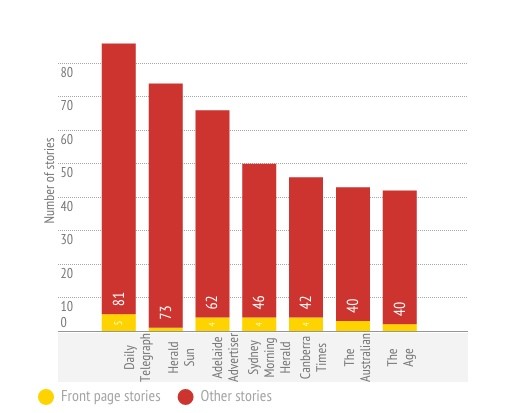 In unsyndicated radio coverage, 2UE had 278 mentions of the Speaker over the period, followed by 2GB, with 270 mentions. ABC talkback station 774 in Melbourne had the third-most mentions of the embattled speaker (167) while rival 3AW ran 164.

When it came to television it was understandably the live news channels that focused the most on Bishop. In unsyndicated items, Sky News led the pack, with 277 mentions to ABC News 24’s 222. Outside of live news it was the commercial TV stations, with their widely watched news bulletins, that led the tally. Perhaps because of the familiarity their viewers would have had with making the trip to Geelong, commercial TV news in Melbourne led more strongly on the story. In the two weeks, Nine News in Melbourne mentioned the Speaker 83 times, followed by Seven News in Melbourne with 59 mentions and Ten News in Melbourne on 33. Seven News Sydney mentioned Bishop 47 times, while crosstown rival Nine mentioned the Speaker 28 times.

The ABC’s various bulletins gave relatively less prominence to the speaker over the period. ABC Perth had 22 mentions, ABC Melbourne and Sydney had 20 mentions apiece, while ABC Canberra had 18 mentions, as did SBS television.

The only reason News Corp is pissed with Bishop is that she seems more effective at dishing out bias than their mastheads do.

Bishop is Toad’s latest festering Achilles heel – that won’t heal in public – she has to be amputated – so they can get back to business as usual slagging off Labor and others …?
It wasn’t that long ago it was Credlin – even Rupert got in on that “dead-wood lopping” – and he isn’t even an Australian.

First day back in parliament – the public gallery – “a fly-past of paper planes”?

I’d like to see on the first sitting day of Parliament everyone wearing those little helicopter caps.
Could the speaker ask them to be removed??

JEANETTE WEIR: You mean the caps with whirligigs on top? Love your comment. 🙂