On Goodes, Reclaim Australia and the Great Lathaming

Good lord, it just gets worse with trying to defend those who boo Adam Goodes. And what is up with taxi seatbelts? 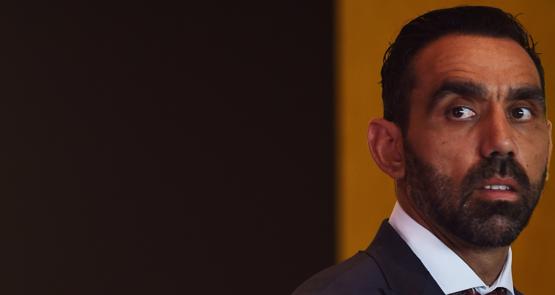 The Goodes stuff. The whining, needy bullshit that the anti-Goodes camp has come out with this week is dispiriting in a manner distinct to settler-capitalist countries — a toxic mix of white self-congratulation, easy hurt and then playing the victim. It is something more than unpleasant for Goodes, all indigenous players, and well, anyone indigenous. But as a set of social symptoms, it’s a goldmine. Magic water man Paul Sheehan weighed in on Wednesday, completing the circle to a degree. It was Sheehan’s late ’90s classic Among the Barbarians that started a lot of this off — the claim by highly paid culture-class professionals like Sheehan, Bolt, etc that they somehow “represent” the masses. Sheehan makes clear what everyone knows about the people who make up such a self-selecting crowd — that their great passion above anything else is self-pity.

Football as played or watched is play and release, an expression of human freedom. Imagine the energy and focus, the self-abnegation it takes to spend the afternoon instead booing one man every time he gets the ball. That’s hard work, but if they must, they must, they tell themselves. It’s an envy/gratitude, half-empty/half-full type thing. People  — and whole social classes — go through life thinking either that life is something where success breeds success, or it’s a zero-sum game, and what you have, I don’t. The former is gratitude, the latter envy, as an original position, which shapes how you live life. The booing crowd are envious. They want Goodes to show gratitude to them — gratitude being a quiet, “good Aborigine”, happy to get a game — and when he doesn’t their envy goes through the roof. The booing is essentially the exhaust feature of it. If that part of the crowd returned to a position of gratitude — watching the game and simply enjoying the players’ skills, without feeling the need to annihilate one of them — they would all disappear in a puff of smoke .

That “what about me” reversal was perfectly expressed by the mother of the young girl Goodes reported, and later spoke amicably with. She thought Goodes should apologise and that would “make him a better person”. The girl herself is unfussed and getting on with her life. Of course. Because she had already apologised and had it accepted, and is still a person-in-progress, not a lump of resentful scar tissue like some of the adults around her. Is that the greatest absurdity of all this? That the girl herself has renounced the act that others are still willing, in their thousands, to defend on her behalf?

No. The greatest and most vicious absurdity is that in the week after everyone was billing and cooing over To Kill A Mockingbird, a black man can still be targeted by the mob for having contact with a young white girl.

Richo watch. What thinketh the Buddha of the Lotus Garden BBQ and BYO today? That the Labor conference should have tackled economic questions (true), and that any commitment to retaining the social (ist/isation) objective, most particularly by Kim Il Carr, is fighting battles lost decades ago:

Funny dat. First because Richo’s Old Right would have fought tooth and nail to retain national ownership of the Australian Frittling Authority, had they happened to have control of the Amalgamated Frittlers and Slurryists, and it took Keating and Treasury to budge them from it. Secondly because when the Berlin Wall came down, what it revealed to Eastern Europe was Western Europe, where a form of democratic socialisation worked. Had we followed that model we would have a diverse and export-oriented high-end manufacturing-technoscience base, not six holes in the ground, million-dollar weatherboards, and a hahaha future fund that barely covers public service pension obligations. Go easy on the prawn crackers, mate, and you will live long enough to see idea of socialisation come roaring back in the West — not least as a solution to the debt and deficit trajectory you’ve identified as a problem.

Shall we call it Lathaming? The Laird Of Liverpool, wise dowager ruler of a people who have no depression and solve their problems by talking over the fence to one another and clog dancing, has the habit of raising an awkward truth and useful point in such a deranged way that no one pays any attention to it. This week’s column in the Fin was another she-had against leftist women. In this case it’s Anna Bligh on the issue of domestic, and especially partner, violence — Bligh being part off the “it happens everywhere” push, and wielding crime stats on upper-middle-class areas  to prove it.

Latham’s take on it is part of his ever-growing fantasy that progressive feminism rather than the market destroyed the pre-’80s world he looks back too with blinkered nostalgia — but his point on Bligh’s take is solid. If you’re going to cite domestic violence stats for Mosman, you’re obliged to note that the domestic violence stats for poorer and more blighted areas are through the roof, comparatively (and absolutely). Class, power, racism, deprivation and its effects have to be spoken of in the debate as primary, not merely ancillary factors, and the insistence that “patriarchy” is not only  necessary but also sufficient explanation of domestic violence is ideology, not reasoning. But Latham’s uniquely unpleasant way of putting it ensured that his point could be passed over in silence — not to mention embarrassment on the part of his increasingly nervous editors, wary of the damage his public obsessions are doing to  financial newspaper in a rapidly feminising corporate sphere. Lathaming. Get into it.

Beat-up of the week. Martin McKenzie-Murray’s subtlish version of the mainstream “plague on both houses” piece on the Reclaim Australia rallies, and the opposition to them, a fortnight ago, in The Saturday Paper. The Reclaim rallies featured various groups, in very small numbers, with a variety of delusional and pernicious beliefs — all of which cut against notions of equality and tolerance, and whose attendees were either explicit neo-Nazis or people who were happy to stand beside neo-Nazis and not chuck them out their rally.  The counter-rallies featured thousands of people who rallied under the banner of anti-racism, from across the liberal and left spectrum — 99% of whom observed the discipline of an exceptionally well-organised rally. A dozen or so decided to take on individual fascists physically, a regressive for of political expression that the left has always condemned (“squaddism” being the technical term). There’s no symmetry, and not much to see here. The story is there ain’t one of any great import — the anti-racists turned up in ever greater numbers, the fascists in ever-smaller ones, and in a place like Melbourne they have been outperformed to the point of demoralisation and defeat — and for those who attend out of feelings of generalised anomie and disaffection, a genuine questioning of what they have got themselves caught up in. A great success but a boring story, and the idea that it is all a measure of Something Much Bigger is fr more exciting. But strange to see such a tilt towards equivalence of sorts, in The Saturday Paper

Is it just me? Why don’t the seat belts in taxis work? None of them work. Their clicking mechanisms are gone. Why aren’t they repaired? Surely a massive personal-injury case is merely a mattr of time. Or is it just me?

Rundle: how to defeat Reclaim Australia

Rundle: this is the way modern politics ends, not with a bang but a Turnbull

“gratitude being a quiet, “good Aborigine”, happy to get a game — and when he doesn’t their envy goes through the roof.” Excellent. So many of the commentariat have failed to nail this condition. Well done, congratulations, etc.

Reckon “Australian of the Year” hurt them?
It’s taken a while, but ….

“the anti-racists turned up in ever greater numbers, the fascists in ever-smaller ones”

In my neck of the woods Pauline Hanson showed up to address the rally of “a couple of hundred” people. It was so underwhelming not one protestor bothered.

“The girl herself is unfussed and getting on with her life.”

Self-pity and victimhood is the spirit of the age, and not just confined to the likes of Sheehan (although it’s particularly galling from his ilk.) I myself was deeply hurt that you didn’t recognise this, Guy, and, frankly, offended.

And on the cab seatbelts no, it’s not just you: cf. John Nash.