All hail the Sun King! Tomorrow, it’s August, and the mind turns to yet another Royal Entry. This time by the Sun King himself, Rupert Murdoch, along with his promising offspring, Lachlan and James, in tow, all descending on these shores in under a fortnight’s time. So make sure you keep an eye on the Old […]

All hail the Sun King! Tomorrow, it’s August, and the mind turns to yet another Royal Entry. This time by the Sun King himself, Rupert Murdoch, along with his promising offspring, Lachlan and James, in tow, all descending on these shores in under a fortnight’s time. So make sure you keep an eye on the Old Buffer’s Twitter feed— he may reveal his hand ahead of his arrival, as he is now doing from time to time — expressing himself in page-1 headlines, instructions for his papers around the world to follow. King Rupert will arrive after his main family company, 21st Century Fox, delivers fourth-quarter and full-year results on August 6 here in Australia, while News Corp is a week later.

While the Sun King is here, he is likely to announce changes in the editorship of Sydney’s The Daily Telegraph, The Courier-Mail and possibly the New York Post. The King’s main gig (apart from geeing up Tony Abbott) will be appearing at News Corp’s Australian media “upfronts”, where the papers, magazines, Foxtel and Fox Sports all sell themselves to advertisers, media buyers and other groups. That’s down for August 11, two days before News Corp reports (August 13 in Australia, 12 in New York). No doubt News CEO, Robert Thomson will be here, so the post results briefing will be done at 8am (instead of the usual 6.30am) out of Holt Street in Sydney. Local News Corp reporters will gather at the Sun King’s feet as he dispenses his pearls of wisdom. That is also the week federal Parliament will be back. What will he say about Bronnie Bishop if she is still clinging to the chair? — Glenn Dyer

Paper by paper. Gay and lesbian issues continue to cause division amongst the readership of rural newspapers, with Mount Barker’s The Courier the latest to be criticised for its coverage. The following letter was published in the most recent edition, raising eyebrows on social media … 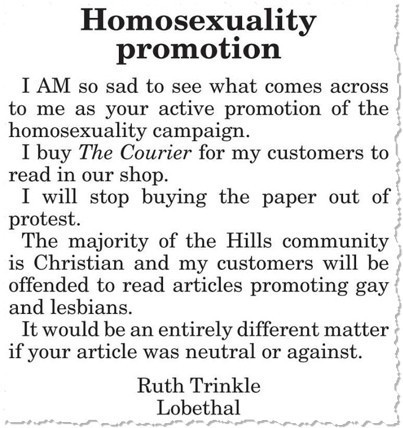 The Courier‘s editor Ian Osterman took to Facebook yesterday to issue a formal response to the letter, saying the the report Trinkle took objection to was a straight news analysis of a recent decisions by two local councils to fly rainbow flags during November’s Feast festival.

“It was a straight (pardon the pun) news story. It was not a campaign,” Osterman wrote. “Ruth’s assertion she will not buy the paper again is a shame as she will deny herself the pleasure of reading about this vibrant and multifaceted Hills community. I find her view that she would be satisfied by biased reporting the most troubling aspect of the letter but The Courier is an independent newspaper that prides itself on giving people a voice, whether we agree with them or not.”

Last month, National MP Darren Chester criticised the Gippsland Times after it ran pieces criticising his pro-gay-marriage stance without, he claimed, giving him a right of response.  — Myriam Robin

Back to the drawing board. When SBS premiered its documentary/reality series Go Back to Where You Came From in 2011, it was a surprise hit for the broadcaster and became the highest rating program on the channel that year. The series took six Australians with differing views of the asylum seeker debate on a reverse asylum seeker journey — on a leaky boat, into refugee camps and eventually into a war zone.

The series sought to broaden its participants’ perspectives on what refugee experiences and, in doing so, broaden its audiences’ perspectives. While the arguments the participants put forward were couched in clear facts, the series was all about the emotional experience. The six Australians were confronted with human suffering, trauma and danger and had their personal prejudices rocked.

The second season in 2012 was the Celebrity Big Brother version of Go Back to Where You Came From and featured comedian and passionate refugee advocate Catherine Deveny alongside former Howard-government minister Peter Reith, who was famously embroiled in the children overboard scandal. With the sparks flying between this pair it was, again, must-see television.

But with Australia’s “tough new laws” now in place to deal with boat people, the show returned to SBS this week with a new season and a new challenge. Disappointingly, the producers have rehashed the formula of the first season, and while it still feels compelling (and they uncover new refugee stories), it doesn’t feel like “important” television anymore.

It feels as if it’s no longer enough to show white Australians coming to the realisation that there are actually dreadful things happening in the world (as Jodi and Andrew both did) and that Australia is really not leading the way in the humanitarian effort. It feels gauche to focus on the Australians’ tearful reactions when a refugee woman pleads for help for her sick baby who will likely die without medical care.

The producers of Go Back to Where You Came From might have found a way to focus on the refugee experience, without framing all of it through the Australian citizen’s perspective and how it makes them “feel”. A scene which is meant to demonstrate the realities of the boat turnback policy (the show’s participants are placed on a tiny orange lifeboat for six hours says) little about the realities of the refugee experience but a lot about the realities of seasickness in small, confined vessels. The conclusion several eventually reach? Boat turnbacks are inhumane because we might make people seasick. — Read Ben Neutze’s full review on Daily Review.

The accounts had nothing to say about post-balance date events such as the widely experienced downturn in ad spending in the UK in the June quarter, which has hit rivals such as Trinity Mirror and the Daily Mail Group. The results of the Australian operation, a wholly-owned subsidiary, are not broken out. — Glenn Dyer

Front page of the day. The Monthly visits Rohingya stuck in Malaysia … 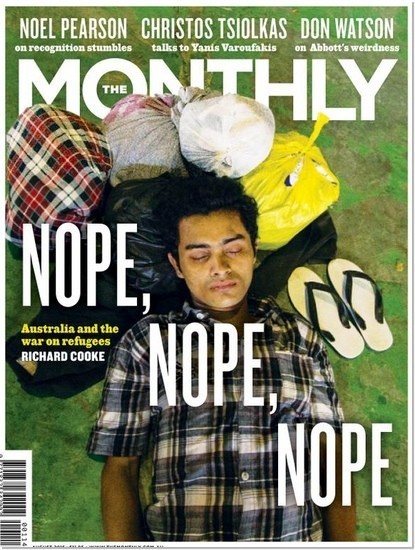 Hands up to be “Groom of the Stool”!