Are people who arrive by boat really queue jumpers?

If you are not supposed to come to Australia to seek asylum by boat, how are you meant to do it? Immigration solicitor Kerry Murphy explains. 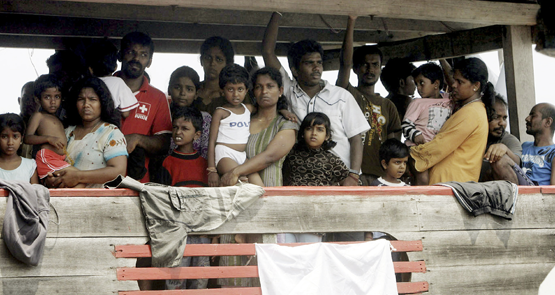 The Australian government has been committed to restricting the ability for asylum seekers who arrive by boat to seek asylum in Australia for years, with John Howard famously declaring: “We will decide who comes to this country and the circumstances in which they come.” Asylum seekers who arrive by boat have been called “queue jumpers” and “illegals”. But who is supposed to come to this country? And under what circumstances?

How many refugees does Australia accept?

There is no queue for refugee resettlement. Worldwide, the United Nations High Commissioner for Refugees estimates there are over 59 million displaced people. This includes an estimated 19.5 million refugees and 1.8 million asylum seekers. Around 86% of refugees live in developing or underdeveloped countries rather than in developed countries such as Australia. The top six refugee-hosting countries in the world are: Turkey, Pakistan, Lebanon, Iran, Ethiopia and Jordan.

To be a refugee you must prove several things. Firstly you are outside your country of nationality and have no other nationality or residence rights. Secondly, you have a well-founded fear of persecution in your home country, and the reasons for that well-founded fear of persecution are because of your race, religion, nationality, particular social group or political opinion. There are no economic or environmental refugees.

Each year, the UNHCR selects those it assesses as being in need of resettlement and proposes their cases to 26 countries such as the United States, Canada and Australia. In 2014, there were only 103,800 refugees proposed for resettlement. Australia has a total refugee and humanitarian program of 13,750, of which 6000 places are reserved for UNHCR referred refugees that Australia decides it will accept. On top of that, there are around 55,000 applications outside of Australia for resettlement in Australia.

Of the remaining 7500 places available each year, 2750 are set aside for onshore protection visas, which is for asylum seekers who are already in Australia when they apply for refugee status. Most of these arrive with other visas, such as student visas or visitor visas, but some arrive without visas.

The other 5000 places are for an offshore special humanitarian program. Not all are refugees; some are spouses of refugees already here, and others must meet the criteria that they are subject to substantial discrimination and human rights abuses in their home country.

Australia pays for the airfare for those offshore asylum seekers who are granted refugee visas.

Why do people get on boats to come to Australia?

Those who are refused by Australia have no right of independent merits review, and hardly any try judicial review. The assessment process is not transparent and it is more dependent on government priorities than the merits of a case. Two people can have the same case, and one is accepted and the other one is refused. Some will lose priority in resettlement because of a more urgent crisis (such as Syria), and this means they may well never get resettled because there are always newer refugees whose cases are seen as more urgent.

When asylum seekers apply onshore, there are merits review and judicial appeal avenues, and the cases are given closer attention than those from offshore probably because of the review processes.

Only around 0.5% of the world refugee population are offered resettlement. If your chances of resettlement are around 0.5% (5 in 1000), it is ridiculous to say there is a queue; it is a lottery that only a very few win.

One of the reasons people come by boat is they realise their chances of ever obtaining a long-term solution of resettlement are so small, the risk of a boat trip will increase their chances from almost nothing to something.

What visa options are available for those who come by air?

It all depends on whether you have a visa or not. If you have a passport and a visa and you come by plane, you have an opportunity to make a protection visa application in Australia. People in this group will be granted a bridging visa to keep them lawfully in Australia. They mostly have permission to work and access to temporary Medicare if needed. If successful, they are granted a permanent protection visa and can sponsor a spouse or dependent children to Australia, in the same way as any other permanent resident. If unsuccessful, they can seek review in the Migration and Refugee Division of the Administrative Appeals Tribunal (AAT) in a process that requires a hearing and has limited procedural fairness requirements. The AAT Act states the following:

In carrying out its functions, the Tribunal must pursue the objective of providing a mechanism of review that:

(a)  is accessible; and
(b)  is fair, just, economical, informal and quick; and
(c)  is proportionate to the importance and complexity of the matter; and
(d)  promotes public trust and confidence in the decision‑making of the Tribunal.

What visa options are available if you come by boat?

Boat arrivals are in a number of different categories according to when they arrived. If someone arrives by boat without a visa, he or she is defined as an “unauthorised maritime arrival” (UMA). People in this group who arrive after July 19, 2013, are liable to be sent to Manus Island in Papua New Guinea, or Nauru for assessment under local law in those countries. Although Australia pays for the whole assessment process and detention centres, only local laws apply, and currently both Nauru and PNG are only offering temporary visas to live in those countries. There is no permanent visa option.

Those who arrived by boat between August 13, 2012, and January 1, 2014, and have not been sent to Nauru or Manus Island are assessed under the new fast-track process. This process does not grant automatic rights to merits review, as some people will be excluded from the reduced merits review process of the Immigration Assessment Authority (IAA). Those whose cases are sent to the IAA will not be entitled to a hearing, and if they provide new information, that information can be excluded from consideration. The idea is a fast-track review process with even further reduced procedural fairness to those in the refugee division of the AAT. The IAA review is described in the Migration Act thus: “The Immigration Assessment Authority is required to pursue the objective of providing a mechanism of limited review that is efficient, quick, free of bias.” There is no mention of “fair or just”, as appears in the AAT Act for the non-UMA cases.

The third group are those who arrived by boat before August 12, 2012. They can lodge a protection visa if the immigration minister agrees because UMA cases are prevented from applying for any visa unless the minister permits it. If unsuccessful, they are able to lodge a review in the AAT like the plane arrivals.

A new temporary protection visa, called the five-year Safe Haven Enterprise Visa (SHEV), is available for those who express an intention to work or study in designated regional areas for up to 42 months. So far, only New South Wales has signed up, but it does not include the area from Culburra south of Kiama to Nelson Bay, and west to Katoomba. Once the refugee meets the 42-months requirement, they can apply for a number of other temporary or permanent visas, but not a permanent protection visa. It means a refugee’s case must be converted into a migration case — not easy to do.

Why are people who arrive by boat treated so harshly?

Non-indigenous people have been arriving by boat to settle in Australia since January 26, 1788. The recent obsession against “boat people” can be traced to the arrival of around 350 Cambodians by boat from 1989 to 1991. In May 1992, the Keating government introduced mandatory immigration detention for people arriving by boat, in order to defeat a court challenge listed for hearing the day after the legislation was introduced.

The term “illegal” has not been used in the Migration Act since August 31, 1994. Non-citizens in Australia are either lawful non-citizens (i.e they have a visa) or unlawful non-citizens (no visa). There is no criminal offence for the unlawful non-citizens, but the potential consequence of administrative (as distinct from custodial) detention until you are granted a visa or removed. However, the current government insists on calling asylum seekers who arrive by boat “illegals” or “illegal maritime arrivals”, rather than using the term “unlawful maritime arrival”. This can only be for vilification purposes because of the negative connotations behind the term “illegals”, because otherwise why does the government insist on using the term? By vilifying a group, the unacceptable “other”, we can then justify treating them more harshly, and this seems to be a political explanation as to why we treat asylum seekers who come by boat more harshly than other asylum seekers.

Vilification of Boat People arriving “UNLAWFULLY” who are then labelled by Government and Opposition Ministers as “ILLEGALS” (it surely is in intent . . . RACIST) deserves much righteous B O O O o o o ing!

Australia imported the “illegal” term from the USA, which used it when “wetback” became unacceptable

Kerry,
You vehemently claim there is no queue and then you describe it. The 103,800 refugees proposed for resettlement are at the front of the queue. Your “lottery” description where this represents 0.5% of refugees is including all those people in Turkey, Pakistan, Lebanon, Iran, Ethiopia and Jordan who are recognised as refugees, have no resettlement rights in their host country and who simply want to go home when the unrest they have fled subsides.

When people arrive by boat with no documents, they have in the past, taken the places the government normally offers to some of the 105,800 people on the UNHCR list. This activity could be colloquially described by an observer as “queue jumping” because arriving by boat has in the past denied a refugee place to someone on the UNHCR list.

You confirm this yourself by stating that “the risk of a boat trip will increase their chances from almost nothing to something” That improved chance has come about by denying an opportunity for resettlement to someone on the UNHCR list.

Anyway, the Abbott government has stopped the boats, it is now bipartisan and all places are now available to the UNHCR nominees.

The queue jumpers have been stopped.

When people arrive by boat with no documents, they have in the past, taken the places the government normally offers to some of the 105,800 people on the UNHCR list. This activity could be colloquially described by an observer as “queue jumping” because arriving by boat has in the past denied a refugee place to someone on the UNHCR list.

Conveniently forgotten, as usual, is that this is a situation created by John Howard.

Lest readers get the wrong impression, it’s worth noting that an asylum seeker wishing to take up the ‘study’ option of a SHEV will pay international student fees i.e. ca. $20k p.a. So it’s basically infeasible for all.

Mr. Hand: all the ‘queue-jumping’ you describe occurs solely because we define it to be so, as part of the vilification process of UMAs. There is nothing inherent in the UNHCR that means we must pit UMAs against UNHCR-listed applicants; we choose to do so because it eases the cognitive dissonance created by our extraordinary cruelty to asylum seekers in the face of our national myths about being decent, welcoming people.