After several days of relative silence, Tony Abbott emerged today to deal with two issues that were dominating debate. 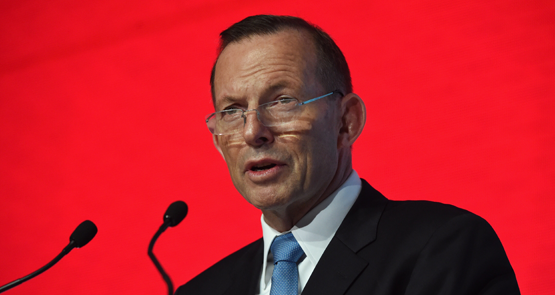 After several days of comparative silence, the Prime Minister ventured into the media this morning — a slightly unusual section of the media, Sydney’s 2SM and Grant Goldman. A lifetime ago, in the pre-FM era, 2SM was a Sydney ratings giant, but it resides now in the obscure stable of regional radio mogul Bill Caralis and has virtually no audience except as the networking point for content for Caralis’ regional network. But Goldman doubles as the ground announcer at Brookvale Oval, home of Abbott’s footy team, so the first question was about the fortunes of Manly, before going on to such hard probing as “what the people are saying at the moment is that Tony Abbott is doing a fair job. Would you say that given the fact that it looked a bit shaky for you about 12 months ago things are on the up and up for the Coalition?”

Sales or Speers it wasn’t. Indeed, it wasn’t even Alan Jones, normally the Prime Minister’s go-to man for a comfort interview.

Abbott did use the footy question to segue, rather clumsily, onto the Adam Goodes issue, of his own volition, presumably in response to the growing chorus — which began on social media and then spread to the mainstream media — for the nation’s leader to speak on it. Abbott, more than almost any other member of a nearly entirely white federal Parliament, brings commitment and credibility to indigenous issues, making his silence as the debate (using the term extraordinarily loosely) about the booing of Goodes raged a little confusing. He cited the authority of News Corp to gently back Goodes, saying “I hope he will be treated with civility and dignity” and that “the last thing we want in Australia is anything, anything at all that smacks of racism” — unexceptionable sentiments that don’t do the matter justice. John Howard, you get the sense, would have been more forthright, for all his problems of indigenous issues.

Abbott’s absence from political debate this week probably reflected a judgement that so dominant had the Bronwyn Bishop saga become that there was really no point trying to get any other message across, especially when Abbott is allowing Bishop to cling to him. Prodded to profusely apologise, Bishop — until recently of the view that the best apology was to repay the money, not say “sorry” — still maintains that she’s doing nothing outside the guidelines, a plainly incorrect statement, and that she won’t be resigning, another statement likely to be proven incorrect before too long. The investigation by the Department of Finance into her travel entitlements has now been expanded at Bishop’s request, ensuring that if she doesn’t resign, the matter will continue to drag on.

The Department of Finance, of course, is headed by Jane “kids overboard” Halton, who was reported last weekend to have opined publicly that the criticism of Bishop was simply a matter of sexism and that if she had been a male there wouldn’t have been a story. In the wake of Bishop’s own apology, that’s probably a difficult position to maintain for Halton, quite apart from the integrity of the investigation her department is undertaking. “The premise of the article published in The Saturday Paper is inaccurate,” a Finance spokesperson told Crikey today. “Ms Halton was giving a talk about senior women on 15 July 2015, including their treatment in the media. Ms Halton provided a number of examples of media treatment, one of which related to Ms Bishop as an example of reporting from that day. At this time there was no suggestion of an allegation in relation to the use of entitlements.”

Readers can decide for themselves how accurate that statement is, given Bishop’s use of a helicopter to attend a Liberal Party fundraiser — which lies outside her official duties — had been reported by that date.

Abbott might have correctly judged that all he would have been asked about by journalists during the week would be Bishop, Bishop, Bishop. But his absence created a peculiar void, as if the country’s leadership had gone missing. The government at the moment looks directionless, hostage to events, incapable of taking charge of the political agenda. But if and when the Bishop saga dies down, one way or another, the problem is what exactly Abbott has got to offer to voters.

BERNARD KEANE: In answer to your last question:- Bugger all.

Halton – on media/sexism – when have we seen Bishop portrayed as a rat….?
….. Is Bishop facing court rather than being able to repay her abuse of office?
[As for Toad – he is caught on a barbed wire fence? If he puts down his foot on the side of Goodes and Pearson, you can imagine how No1 pimp “Blot on the Political Landscape” is going to react – and vice versa?]
“C’mon baby let the Goodes time roll….”

BK: As 2SM was formerly owned by the Catholic church, maybe our top gun PM was hopping for some Christian charity from his interviewer (which, on hearing, seems to have been afforded on this occasion).
As for your somments on the management of the Dept of Finance; white wash warning; so much for the independance of the Public Service; when’s the next election?

Thank God for good journalism in Australia. The willingness of good journos to research and pursue the facts and give them wide distribution is about the only way we, the public, can keep an eye on our pollies ‘discrete” behaviour.

What would people know of pollies extreme use of “entitlements” if it wasn’t for exposure by the Media. Nothing !!

Bronny terrible, Abbott weak as p….., and Jane Halton the very antithesis of what a professional public servant is.

I’m looking forward to Halton’s dismissal as much as Bishop’s.

Not for reasons of gender, I think I can reasonably claim that both are disgraces to their respective professions.