Geert Wilders is coming to our shores ... does the PM have a Time-Turner? ... Clive says bye-bye Bronnie ...

Geert Wilders getting into Auspol? Two new micro-parties were registered this week: the Australians Against Paedophiles Party and the Australian Liberty Alliance. While not much information exists on the former (though we can hazard a guess as to their policy centrepiece), the latter has some interesting associations. The Australian Liberty Alliance is the product of the Q Society of Australia, which is based on the theories of far-right Dutch MP Geert Wilders. The party has been registered by Ralf Schumann of Melbourne, the secretary of the Q Society, and Debbie Robinson from the society has previously said she will run as a candidate for the party. The Q Society believes it isn’t racist, as Islam isn’t a race, and has campaigned against mosques in parts of the country. The third item in the party’s platform is “Stop the Islamisation of Australia” and the website features a letter of support from Wilders saying he will be at the party’s launch in Perth in October: “It has been a long road for the founding members since we first spoke about this project in Australia last year. I know it will be a difficult journey from now on.” Putting the date in the diary now.

Pollies and a funeral. A caller to 6PR yesterday said that some politicians were concerned about using their travel entitlements to fly to Western Australia for the funeral of Liberal MP Don Randall tomorrow in light of the furore surrounding Speaker Bronwyn Bishop’s use of her parliamentary entitlements to attend her colleague’s weddings, and are looking for other reasons to head west as well. While most of us would think that attending the funeral counts as official business, it’s interesting to see how the tables have turned.

On the topic of travelling to Randall’s funeral, we noticed that the Prime Minister may need a Hogwarts-issue Time-Turner to attend all his commitments across the country tomorrow. The PM is expected to attend the service tomorrow morning, but he is also scheduled to launch Education Minister Christopher Pyne’s book tomorrow night (yes, the party they said we couldn’t come to), which is meant to start at 5pm in Melbourne. With a four-hour flight between Perth and Melbourne and the traffic on the Tullamarine on a Friday night, we asked Abbott’s office if he still planned on honouring both commitments, but didn’t hear back.

Prince Adam of Braitling? Things are getting very weird in the NT. Everybody knows that things are very different in the NT, but it now seems that NT Chief Minister Adam Giles has joined a certain federal senior politician in having an elevated sense of the importance and role of politicians. In an interview with local ABC radio in Darwin reported yesterday Giles waxed lyrical on the vexed issue of politicians’ entitlements and the very, very important work that politicians do while far away from home. Giles was responding to claims by former CLP minister Robyn Lambley, who told the ABC that, when it came to ministerial travel in the NT: “You can go in any direction, with who you want, for as long as you want … usually the Chief Minister approved it.”

Earlier she had told Richard Margetson on ABC morning radio that she had been “directed” by Giles to take a fact-finding trip to Istanbul just weeks before being sacked from as health minister. The ABC reported that Giles had defended taking spouses or partners on ministerial travel in certain circumstances. Giles also displayed some apparent confusion with the notion of the separation of powers within the — admittedly confusing — political system in the NT, telling the ABC: “I know that many politicians spend a lot of time away from home, and they have a lot of regal responsibilities that they have to do,” he said.

Giles’ comments follow a spray delivered to a Darwin shock jock by Deputy Chief Minister Dave Tollner in late June that the prospect of an ICAC in the NT would “undermine the supremacy of your parliament”.

A local wag has suggested that henceforth that Giles, currently referred to formally as the Honourable Adam Graham Giles MLA, be from this time on be referred to as “The Right Honourable His Excellency Prince Adam of Braitling.”

Palmer’s on message. Clive Palmer has been quiet of late — maybe he decided we had enough crazy without him. But yesterday he decided to reprise the message he had for Campbell Newman with a video message for Speaker Bronwyn Bishop. It looks like a trailer for a horror movie with a name like “I know what you did last question time”. 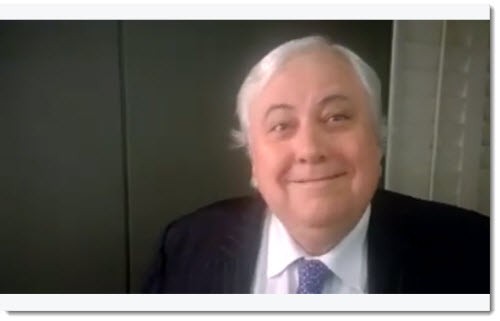 McTernan watch. So what’s new with Australia’s favourite spin doctor, UK labourista John McTernan? Not much that’s good. When last we checked in, McTernan had departed Australia after Julia Gillard had been deposed (soon after an embarrassing McTernan-inspired Women’s Weekly photoshoot) and had returned to Scotland — after a period of footloose punditry — to be chief of staff to Scottish Labour leader (and Blairite ) Jim Murphy just before the 2015 election. How did that go? Not good, not good. Labour lost all but one of its 30+ seats in Scotland, as the SNP stormed to victory.

Now, McTernan has sage advice for the Labour Party, currently going through a leadership election which may be won by Left figure Jeremy Corbyn, after a huge grassroots campaign. McTernan’s take? “Who cares about the grassroots” McTernan’s answer to a Corbyn victory: “He should be deposed immediately.” Brilliant, brilliant. Who’s getting the benefit from such wisdom these days? Well, his Twitter avatar is a poster for the old Western “this gun for hire”, so the answer may be no one. Could the ALP be persuaded to give this towering genius a second chance? Like Scottish Labour did?

One of us, one of us! It’s not often that we give a shout-out to the individual subscribers of Crikey, partly because there’s too many of you, but also because we love you all equally. We’re making an exception to the rule today because Australian columnist Chris Kenny finally bit the bullet and took out a free trial, as he told one of his Twitter followers yesterday. We hope you’ll enjoy the next 20 days so much you sign up — maybe you’ll rethink calling us “childish blather”.

MPs should have their travel to attend Don Randall’s funeral paid from the public purse, no question. It’s part of their official duties as MPs to show respect for their follow MPs. I would think that the same would apply to attendance at state funerals for previous PMs such as Gough Whitlam, Malcolm Fraser and even Tony Abbott (I was going to ask for it to be ‘soon’, but I realise that this might get me into trouble and actually I don’t really mean it…)

They could pay for their own ticket?