Do your research. Speak calmly and rationally. And be ready to pounce on false statements. 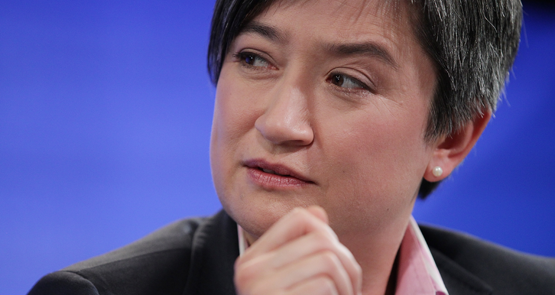 Self-styled conservative hero Liberal Senator Cory Bernardi yesterday sparred against Labor’s leader in the Senate, and poster woman for the LGBTI movement in Australia, Penny Wong, over same-sex marriage legislation that might come before Parliament in a matter of weeks.

It wasn’t a presidential-style debate in which Wong was prepared for battle going up against staffers pretending to be Bernardi, but Crikey understands that staffers did sneakily borrow his book, The Conservative Revolution, from the parliamentary library on the day the debate was announced, flipping through the pages and looking for the arguments the Senator has made against marriage equality.

Wong has come a long way since those awkward Q&A appearances before 2011, when she had to defend Labor’s opposition to same-sex marriage while quietly working behind the scenes to get the platform changed. Since 2011, she has become the most vocal advocate for legalising same-sex marriage. Her work isn’t over, but a high point was reached at the ALP national conference on the weekend, when Labor decided to bind its MPs to vote for same-sex marriage after 2019.

Echoing lines she said at the conference, Wong opened the Press Club debate by saying ordinary Australians wanted same-sex marriage to become law, and stating there is “nothing to fear from equality”.

For his part, Bernardi started proceedings with the extremely odd claim that marriage couldn’t be redefined because it wasn’t invented.

“Marriage is not a right. It was not invented, marriage simply is.”

He then painted a picture of a dystopian future in which marriage equality is enforced and where churches, and bakeries and pizza places opposed to same-sex marriage are forced to shut down to conform to this new hellish future.

“I believe there is no need to redefine marriage on the basis of equality. To do so is to live in a dictatorship of relativism where nothing is real, truths are denied and if they’re considered inconvenient by the politically correct system,” he said.

A journalist asked him to clarify his previous attempts to link same-sex marriage to bestiality, which he denied. And Wong was ready.

“I merely said that if we redefine marriage it would lead to further calls for redefinition and for other relationship types to be in there,” Bernardi claimed.

“I would suggest to anybody who doesn’t think Cory said what he said to consider the Hansard, I think it’s quite clear what was said,” Wong replied.

It checks out, according to Hansard from a 2012 debate on marriage equality that resulted in Bernadi resigning as shadow parliamentary secretary to then-opposition leader Tony Abbott:

“There are even some creepy people out there — and I say ‘creepy’ deliberately — who are unfortunately afforded a great deal more respect than I believe they deserve. These creepy people say it is okay to have consensual sexual relations between humans and animals. Will that be a future step?”

Wong argued against a plebiscite — something Crikey understands the Prime Minister has canvassed senior colleagues about — stating it would be divisive, expensive, and ultimately a delaying tactic. When she called on a free vote in the Liberals, Bernardi claimed that Liberals had always been able to cross the floor.

Wong pointed out that some Liberals had called for those in cabinet who supported same-sex marriage to step down from their jobs.

When Bernardi threw up the argument that bakers, florists and other businesses would be forced to do work for same-sex weddings against their conscience, Wong used an argument that would be all too familiar for a economic liberal: the market decides.

Bernardi’s other argument, and the one most favoured by the Australian Christian lobby today, is that same-sex marriage would deprive children of a mother and a father. Wong said that missed the point. Gay people, including herself, are already having children.

“I think that if we want to have a discussion about how we try and support all families to bring their children up in that way I’m happy to have that discussion, but that’s a very different proposition to saying that we have to exclude some people from the institution of marriage,” she said.

Quite a few people were scratching their heads when Wong agreed to debate Bernardi. What would she stand to gain out of debating him? But Wong herself acknowledged that the fight for same-sex marriage wasn’t over. In one moment of agreement with Bernardi, she said that same-sex marriage isn’t inevitable.

“I say to the people in the room who support marriage equality and to Australians watching is progress is never made and reform is never won … without us fighting for it, and we’ll have to continue to do so.”

I notice that the Murdoch Press didn’t name a winner because it definitely wasn’t Cranky Cory.

‘Do your research. Speak calmly and rationally. And be ready to pounce on false statements.’

Penny Wong will be our President one day. And we’ll be a better country.

you tube on the topic below: