Sharman Stone should be ashamed to call herself a Liberal

Quotas are not Liberal. End of story. You don’t get to buy a hate cake and cram your pie-hole with it, too. 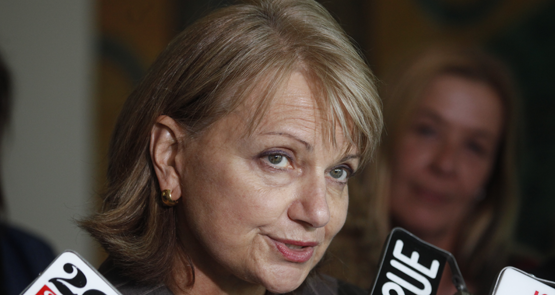 Whether it was the ALP’s conference declaration on female MPs or a staffer who just couldn’t stand the sight of another party room Pirelli calendar, something gendered happened this week in the Liberal Party. Federal MP Sharman Stone called on her party, whose lady-presence has dwindled in the Senate, to positively preselect female candidates and uttered the dirty word “quota”. Christopher Pyne, who kick-started this round of public conversation, echoed the sentiments of the PM and of every other neoconservative when he said that he “did not believe” in quotas. He does, of course, believe in the principle of merit, which holds that equality in all things, including parliamentary representation, is there for the taking. In other words, women face no obstacles other than themselves en route to power, and Pyne suggests “other measures” for equal participation.

What these “measures” might include — perhaps deportment class for interested ladies? — is uncertain. What is certain, though, is that it is not intrinsically Liberal for Stone to suggest, as she did, that it is always a “miracle” when women manage to grab a little power. She’s correct, of course. In the Liberal Party and many other professional and political realms, most women must miraculously dispose of obstacles that do not appear before most men. You’ve got to work twice as hard to get half as far, etc. But to concede that the social has any real impact in the face of Personal Striving should be just as much of an impediment to Liberal Party success as actually being a woman.

Stone may be factually correct, but that doesn’t mean she’s right, and it certainly doesn’t mean that she, a member of a party to which the idea of a prevailing “natural” equality is foundational, gets to have it both ways. If she believes that the struggle of women for equal economic and political participation is not something that is up to the individual lady but should instead be the focus of institutional reform, she might want to think about switching parties. Pyne, whose belief that the possibility of upward mobility is located exclusively in the individual, is the one holding true to Liberal values here.

The member for Murray needs to shut it if she cares for her party at all. This kind of thinking, after all, is a slippery leftist slope. It starts with urging an institutional response to one social problem, and it never ends. If we concede that working women need even more than indexed allowance for childcare in those “precious few first months of a baby’s life” (like the following 200 months have less financial value) in order to achieve equality, what next? We may be forced to admit that the unemployed are not undeserving and that Aboriginal Australians are not entirely responsible for the theft of their own land.

Popular feminist analyses currently have it that Stone and those who join her in the bid for quotas are doing the just thing. Which is as may be, but for a card-carrying Liberal, it’s also absolutely potty. And I say this not just because I personally oppose any growth to a poisonous party of stump-dumb ideologues whose history has been as inimical to my gender as it has been to all socially marginalised groups save for Jesuits. I say this because you don’t get to buy a hate cake and cram your pie-hole with it, too.

You can say all you wish that anything that “advances” the “cause” for women is good. And, publications like The Guardian do so routinely. The argument goes that success for one woman is success for all women and that to diminish the pleadings of, say, Peta Credlin for a less hostile environment is un-feminist. Even if one woman, the chief of staff, advises a man who upchucks hideously myopic and sexist policy that impacts a majority of women

Of course, it is true that Credlin is subject, as Speaker Bronwyn Bishop has recently been subject, to a gendered kind of critique. And of course it is true that both women must face an antique, if mannerly, brand of sexism within their party. Call the whaambulance and administer 10 CCs of “you’re a flagrant hypocrite” immediately. You don’t get to sob about sexism in a party whose only means of policy address to women is to help them have babies. It’s like suing the company that made the “Cookies and Lard” ice cream you ate two litres of for making you feel ill. All the warning you needed was on the label.

Equality feminists will drone on and on about how every individual success for women somehow translates to a win for all women. Neocon women will absurdly continue to demand equal representation in organisations openly committed to quashing the possibility of economic equality. The individual will continue to flourish at the centre of all public discourse and somehow, “women” will remain the sole locus for very mild conversation about how social complexes can sometimes, you know, just a bit, impact individual life. Nothing will change in these discursive terms, and we will all be forced to hear “You Go Girl” as another argument is begun and ended in a world that agrees, even if it chooses not to admit it, with the merit principle of Christopher Pyne.

No doubt Christopher Pyne has some merit tests in mind for ladies who wish to gain pre-selection, but to give him some help how about:
a) ability to pee standing up
b) selection in the Wallabies, Socceroos etc
c) membership of a male voice choir
I am sure that Crikey readers, like Chrs Kenny will rapidly add to the list 🙂

Most excellently written Helen and I concur. Plus I would say that having a quota system was great in 1985 – but still needed in 2015?! It’s a bloody insult that Labor still needs this (but most instructive that they do) and as for the Libs, the Nats etc – too little, too late.

It is of course time for women to form their own party for the advancement of women. You quite rightly point out that having women present in Parliament does not mean that women are represented. Too often they have acted front-of-house as a Trojan horse for some very anti-women measures by the majors. Some have been used as vote-bait or to assuage the party’s “look” as an all-male club (notwithstanding the powerful brotherhoods operating backstage).

Having an all-female feminist party would I think be Tony Abbott’s worst nightmare and also discomfitting for Bill Shorten. In many respects such a party could not lose because even in losing the majors would have to accelerate their rates of female participation.

To be fair to Labor it is the Union’s party and so it should be. The Women’s Movement piggy-backed on this movement and we were welcomed bacuse it made Labor more electable. However, it means that all feminist issues are mediated by the Union movement and given the extreme socially conservative right-wing elements are sometimes threatened.

But heck, I guess it wouldn’t now be permitted to have an-all-female feminist progressive women’s party because that would be SEXIST, wouldn’t it!!!

To be selected by merit a further criteria is that you have a wife at home to look after the children. And the wife must be of the opposite sex to you. And you must have gone to a single sex Jesuit school. And you must be one of the boys.

Of course, any merit selection process would not see the likes of Abbott, Brandis, Pyne, Dutton chosen, unless the appointment was for class dunce, in which case it might be a 4 way tie.

It is a given that anyone who has done well in life will claim that it was always on the basis of merit, luck never plays a part in it. Ambition apparently isn’t a factor either. Just merit.

As an HR (Human resources, not Helen Razer) professional of some 30 years I first embraced merit, for clear and obvious reasons, and then I just gave up having realised that the vast majority of the executive class are unmitigated idiots. Their chief talent was their ability to deny their ongoing stupidity, and think themselves more worthy than others.

So all up, HR, (Helen Razer, not Human Resources)I agree with pretty much everything you say, except for this;

Don’t the National Party have a quota in the Cabinet including the Deputy PMs job?