Why were all the Amy Schumer interviews so terrible? Plus other media tidbits of the day.

Guardian US unionises. The newsroom of The Guardian in the United States has unanimously voted to unionise, joining the spate of online newsrooms in the country to seek the industrial representation common to established print outlets.

Pivotal to the successful push, Guardian staff said in a statement, was new Guardian US editor Lee Glendinning, “who immediately welcomed our initiative to seek collective representation”. Glendinning is an Australian who began her career as a cadet at The Sydney Morning Herald in 2000. She became deputy editor of the Guardian Australian when it launched and was widely seen as founding editor Kath Viner’s presumptive heir. That’s what she turned out to be, but not in Australia — Viner again appointed Glendinning her deputy when she moved on to the Guardian US, and left her in charge when she moved back to London to become the first female editor-in-chief of The Guardian.

Moves to unionise digital newsrooms in Australia have had less success, perhaps due to their relatively smaller size compared to newsrooms in America. The Guardian Australia is not yet subject to a collective agreement. — Myriam Robin

And speaking of the Grauniad … It was a bad week for Peak Guardian fans last week, with the PG ratio heading close to zero, drowned in a flurry of stories — politics, economy, that sort of thing — anyone would publish.

This week they more than recovered their form, with a solid 0.3 for mid-week, gained from one article alerting you to things you care about in something of no real importance (hidden racism in US cartoon pro-wrestling), a sensible article by someone with a comment-is-weird name (Conrad Liveris), and an article on men drinking rose by Jason Wilson disguised as a meta-article about media coverage of same, undermined by his willingness to give barbecue tips (the usually estimable Wilson didn’t have a column this week but wrote one anyway).

But the jewel in the crown was an exchange of articles on “vocal fry”, (the depth-of-the-throat voice the Kardashians et al use), between Erin Riley and Naomi Wolf, a Peak Guardian perennial. Extra points were awarded for the reply article telling the original writer to listen to what women say not how they say it in an article about how they say it. Thus 0.3 for a season average of 0.25, and it’s still not Friday — Guy Rundle

Sky high. By any measurement, pan-European satellite broadcaster Sky is one of the two the powerhouses of the of the Murdoch empire — rivalled only by Fox News in the US. Overnight Sky underlined that by revealing it now had more than 12 million customers in the UK and Ireland, had cut its customer churn (that’s the replacement of lost subscribers) to an 11% year of 9.8%, and lifted adjusted revenue 5% to just on 11.3 billion (over $24 billion) and revealed a 6% rise in pre-tax profits for the year to 1.2 billion pounds, or more than A2.5 billion. Sky’s value (it’s 39.1% owned by 21st Century Fox) is now over $40 billion.

It was the first set of full-year figures since Sky bought the Sky businesses in Germany and Italy from 21st Century Fox. Revenues in the UK and Ireland were up 6% to 7.8 billion pounds ($16.6 billion) with operating profit up 12% to 1.35 billion (close to $2.9 billion). Sky said it had its highest organic growth in the UK and Ireland for 11 years, adding 506,000 customers to take it past the 12 million mark for the first time.

Sky’s solid results came a day after ITV, the UK’s main commercial free-to-air TV broadcaster, revealed a 24% rise in pre tax earnings, despite a 4% fall in audience numbers in the June half year. — Glenn Dyer

“Kim Vuga has emerged as the most controversial figure from the third season of television’s most extreme reality show, Go Back to Where You Came From. But what is most remarkable about this dubious new star is the wave of approval emerging for the 46-year-old from Townsville after last night’s first episode.

‘I’ve got messages of support from all across Australia,’ she told news.com.au. ‘There’s a lot of people out there saying, “Kim, thank you, you speak for me. Please keep doing what you’re doing for Australia.”’

Kim, who already ran a ‘Stop the boat people’ Facebook page, said she had been inundated with so many friend requests she had to set up a public page … Fans on Facebook have praised Kim as an ‘inspiration’ and a ‘True Blue’ for her hardline anti-Islam and anti-immigration stance. ‘It’s left me with stronger convictions,’ she said of the SBS program.”

Why were all the Amy Schumer interviews so awful? Junkee’s Meg Watson takes readers behind the scenes of a celebrity publicity tour:

“After leaving Hader, I’m taken back to Designated Waiting Area #2 in time to overhear one of Schumer’s PR people serenade her with a ridiculously impressive version of Alicia Keys’ ‘Fallin’. With the comedian rhythmically interjecting in the song’s lulls to yell things like “Wyaaaaow!” and “Whooooph!” it feels like some kind of planned routine to keep the spirits up on what is now her third day of interviews. That makes me pretty happy until I realise that a) I have to follow it, and b) a planned Alicia Keys routine is necessary in the first place.”

Front page of the day. The tabloids have spoken, but will the fans listen … 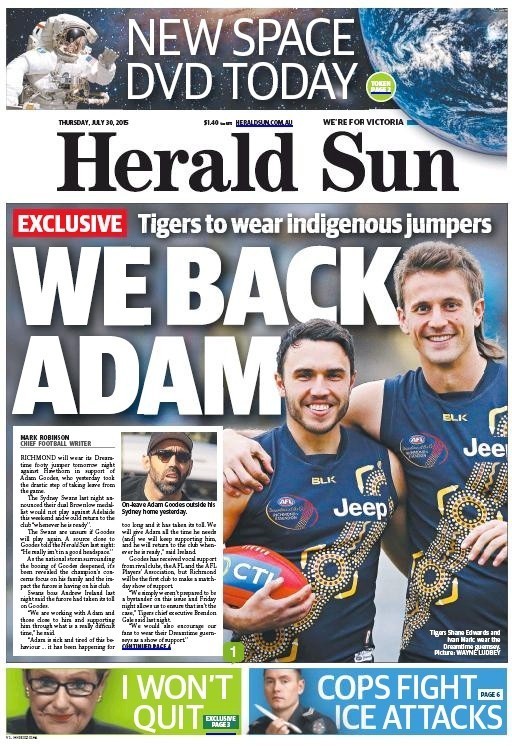