Bishop retreats to 2GB for the soft apology interview

Bronwyn Bishop has said sorry, but in the cosiest way possible. 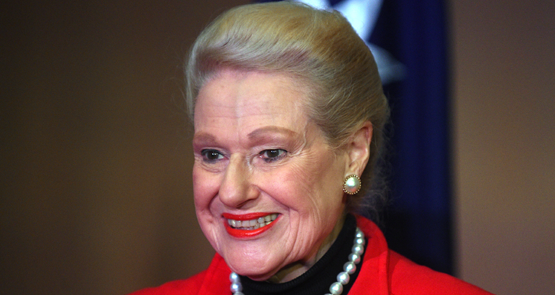 While Bronwyn Bishop was gutsy enough to front a combative press conference when her taxpayer-funded Melbourne-to-Geelong helicopter trip was first revealed, as it became clear this was a pattern of behaviour for the embattled Speaker, she chose to retreat to the loving embrace of the 2GB studio for her long-awaited apology.

In the latest round of what some have dubbed the “four weddings and a political funeral” scandal, Bishop rocked up to the comfy sponge-bath that is the Alan Jones apology interview on 2GB this morning, when Labor confirmed that it was seeking Bishop’s resignation, and Clive Palmer and Andrew Wilkie announced they would move a motion of no-confidence in the Speaker  when Parliament returns in just over a week.

Bishop won’t be for resigning, but she was finally forthcoming with her apology.

“Alan, what I really wanted to say this morning is I want to apologise to the Australian people for my error of judgement and say sorry,” she said.

“That helicopter, yes, I was short of time, but there was really no excuse …When you have a busy life people try to make sure you can get from A to B as quick as you can, but at the end of the day it is my responsibility.”

Bishop said she would repay all expenses related to weddings as they were an “error of judgement”, although she pointed out that those expenses were “within the rules”. She said the Department of Finance would go through her expenses, potentially to stem the flow of revelations currently appearing in the tabloids on an almost daily basis.

Although Jones asked a few questions about her expenses, he attempted to shift the debate towards the expenses of other politicians, including former prime minister Julia Gillard.

“The reason I’m talking to you is we have to be fair in all of this. I’ve known Bronwyn Bishop for 1000 years, but I remember when Julia Gillard used a VIP jet to attend the wedding of her press secretary in Byron Bay,” he said.

“Doesn’t there need to be a wide independent investigation of the legitimacy of [all politician] expenses?” he asked.

“You believed, did you not, that the expenses you incurred and signed off with passed the muster of the rules?”

To her credit, Bishop did then do a brief doorstop, and at no point did she seek to escape responsibility or shift the discussion. Bishop appears today focused entirely on her own contrition and apology, but Jones has form when the focus is on a conservative politician to seek to shift the focus to others as well.

In 2000, when then-minister Peter Reith was the centre of a scandal over a $50,000 phone bill for the use of Telecards, then-prime minister John Howard sat down for one of his regular interviews with Jones, and Reith got off relatively lightly.

“If you’re to believe what you read, details of Telecard use by about 200 MPs and senators. Do you know of any circumstance in which MPs have been giving their Telecards contrary to remuneration guidelines to members of their family other than Peter Reith?” Jones asked.

Jones was also fairly dismissive of the biggest scandals to hit the Howard government in its final years, the wheat-for-weapons scandal involving the Australian Wheat Board.

“Well talking about evidence. There is no evidence whatsoever that Alexander Downer knew the AWB was paying bribes, or he that knowingly aided and abetted the AWB’s behaviour,” Jones told Howard.

It isn’t limited to Jones, however, Joe Hockey often gets a warm welcome from Ben Fordham:

The job of Treasurer on budget night, it’s not one that many people would want to sign up for, because you’re always going to upset people no matter what. But it seems based on what we’ve read today in some of the figures that have been leaked to the newspapers, that there are going to be a hell of a lot of pensioners who are going to be very happy with the result, and there will be some who are better off, some more wealthy retirees who are not going to be happy.

Well, we’re working very hard to try and get the balance right and for Australians of pension age on lower income, they will be better off, there’s no doubt about that. For people that have in some cases, assets over $1 million in addition to the family home, they will lose some of the age pension, but the best thing we can do for them is have a stronger economy which means that the assets that are contributing to their income are worth more and ultimately, that’s good for the whole nation and very good for them.

And we can credit Ray Hadley’s regular interviews in part for transforming Scott Morrison from the cop on the Immigration beat to the cuddly Social Services Minister he is today.

While Jones is often a safe bet for apologetic conservative politicians, it’s not entirely the case that they can expect an easy ride with Jones. If you cross him on an issue close to him or his listenership, it can quickly turn sour. Most recently Communications Minister Malcolm Turnbull was subjected to Jones’ ire over leadership speculation earlier in the year, and Environment Minister Greg Hunt sat patiently while Jones yelled at him for half an hour over the Shenhua mine.

The popularity of Alan Jones is a mystery to me – he lectures, he shouts, he insults. His treatment of Julia Gillard was a disgrace, yet still he is employed and I guess some people must listen to him? Thank goodness this sort of ‘shock jock’ radio has never been popular in Melbourne.

Apology accepted Bronny; now that we are all pal’s again can we see the attendance list of that super secret meeting in Albury just to clear the air?

” can we see the attendance list of that super secret meeting in Albury just to clear the air?”

And there lies the problem. Is a false declaration a criminal offence?

I wouldn’t have any problem with a serving prime minister using a VIP jet to get to a private function, not even Tony Abbott, if that’s the only way of getting there in a time effective and safe manner.

After all, prime ministers are on duty all their time. I imagine they’d also have accompanying security details who’d need to be transported too. I can’t imagine a prime minister and bodyguards could use public transport.

Speaker of House of Representatives is a very important position. But it’s only while parliament is sitting.