Polls phone home. Does your political leaning reflect your views on the existence of alien life forms? According to Essential polling 71% of Greens voters think it’s likely that intelligent life exists somewhere else in the universe — more than the 54% of Coalition voters who think it’s likely and the 67% of Labor voters who think ET could really be out there. Some 35% of Coalition voters think it’s unlikely that intelligent life exists outside of Earth, a higher rate than the 26% of the general population. Men are also more likely to think intelligent life exists than women. In contrast , just 40% of Coalition voters polled earlier this month think that there is conclusive evidence that climate change is happening and caused by humans. Some 70% of Labor voters and 95% of Greens voters think that climate change is happening — more than think it’s likely that aliens exist. We’re not sure what this says about the existence of intelligent life here on Earth, but you can make up your own mind.

More tribunal issues. Over the last month we’ve been hearing lots of issues with the amalgamation of the Administrative Appeals Tribunal, which is bringing the Migration Review Tribunal, Refugee Review Tribunal and Social Security Appeals Tribunal under its umbrella. Now we’re hearing that whose who have had adverse findings from the Child Support Agency have been left without an avenue of appeal in Western Australia:

“The Child Support Agency has been including a paragraph in their decisions that you can appeal to the Administrative Appeals Tribunal. Received a message this morning saying that the relevant legislation has not been passed in WA so there are no appeal rights to AAT in WA. This was from 1 July but CSA still not updated web site or correspondence. Seems they were asleep at the wheel.”

We’ve asked the Administrative Appeals Tribunal what’s going on with Child Support and will update the item when we hear back.

South Australia. Members of the Liberal Party are very good at talking about how the party needs more women in elected positions, but there hasn’t been a whole lot of progress on how to get there. We don’t think Sharman Stone’s suggestion of getting rid of question time will go very far — we enjoy the yelling too much. Now we hear from a tipster that Senator Anne Ruston has gained a higher spot than Senator Sean Edwards on the Liberals’ South Australian Senate ticket. “His colleagues are uncomfortable at how outspoken he is about submarines,” the source tells us. We asked around about this but it was news to Ruston’s office, who said they aren’t aware of the existence of any ticket. Are some South Australian Libs trying to push Edwards down the order? We’ll watch and see.

What a page turner. Our spies in Melbourne have been busy:

“Spotted: Peter Costello in Hill of Content bookshop in Melbourne enquiring after a Greg Sheridan book. No luck — he was then after David Gonski’s book of speeches before having a quick peruse of the latest Monthly featuring Joe Hockey with his head in his hands under the heading ‘of clowns and treasurers’.”

The former treasurer was a day too early to nab a copy of Sheridan’s When We Were Young and Foolish, which is released today — we bet he was keen to see if his name would pop up. For a bit of relief between Gonski speeches we suggest Costello might pick up a copy of Crikey politics gun Bernard Keane’s his first novel, Surveillance, also released today. The two books being released on the same day leads us to encourage a bit of healthy competition — we’ll be watching those sales.

Turnbull the tank engine. Communications Minister Malcolm Turnbull has long been a fan of telling his social media followers when he takes public transport. Regular citizens are more likely to document when they travel in a limousine or helicopter, but for the multimillionaire it’s more of a novelty to be among the plebs on V/Line. As well as tweeting this pic from South Geelong station, Turnbull also made the effort to mention that a conductor checked his Myki — he says there’s no way he could jump the barriers. It’s as if he’s making an extra effort to remind us for the frugal way he’s getting around — the cost of a daily fare to Geelong is $23.60 return, a far cry from the $5000 helicopter Bronwyn Bishop took to travel the same distance in November last year. 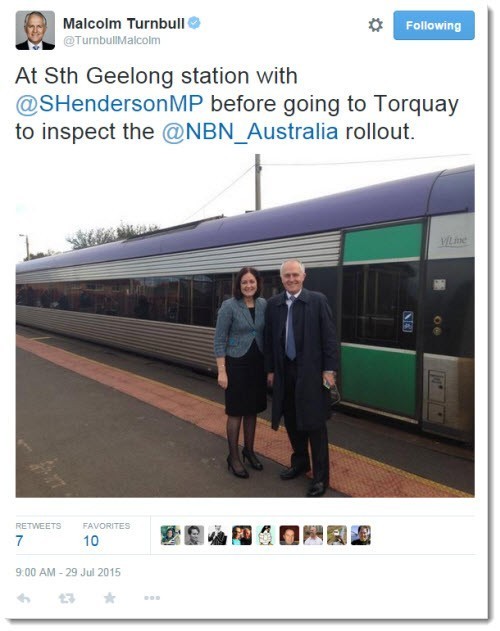 Bernardi so very Wong. Like many of Crikey‘s readers, we’ve been looking forward to the debate on same-sex marriage at the National Press Club between senators Penny Wong and Cory Bernardi for quite some time, and after the extended standing ovations for Wong at the ALP conference over the weekend, we wonder if Bernardi was feeling nervous. Bernardi’s weekly newsletter, “A dose of common sense”, came out early this morning to spruik the debate, saying “work begins today, with the same-sex marriage debate at the National Press Club with Senator Penny Wong. I look forward to a spirited debate as we engage in the battle of ideas.”

“Sorry to disappoint you but the bus stop sign photographed in your Tuesday’s tips and rumours appears to be an art installation. Bus routes in Melbourne have three digit route numbers, the overall layout of the sign contains very subtle differences compared to official signage and there is a date and what appears to be a name at the bottom of the sign or sticker.”

Not what you think. Earlier this morning tech company Flipboard tweeted a link to Minecraft resources for teachers — the only problem being that the photo the company used to promote it wasn’t of the videogame at all — it was the Holocaust memorial in Berlin. The tweet was quickly removed. 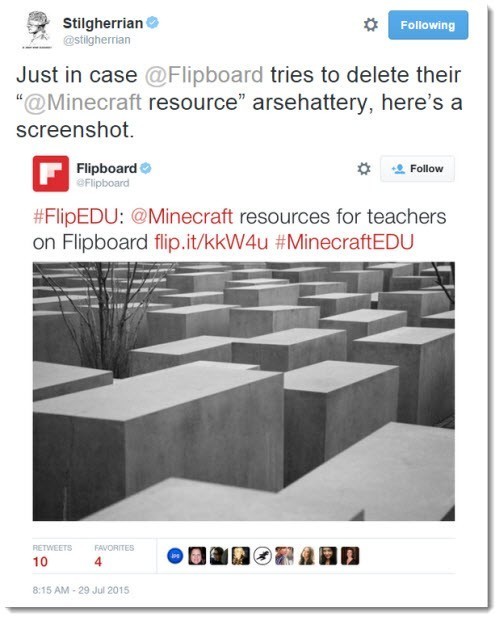 Don’t look now, but scientists might have just discovered evidence of alien spaceships

“Intelligent life, somewhere out in space”? Puts me in mind of the last lines of The Galaxy Song.

Surely this calls for a Factor Analysis of the figures so that we gain a clearer picture of precisely how different groups responded? That’s unless of course Crikey doesn’t want that sort of basic information to be printed, because it would raise interesting but embarrassing questions.

Bernardi feeling nervous about facing Wong – he may have been feeling a little unloved too? So he went to the National Press Club looking for “A dose of clap”?

It’s rational that more people accept that global happening than believe that extraterrestrial intelligence exists somewhere else in the Universe.

After all, the evidence for global warming can be examined. We don’t know what the conditions for life to develop on an extrasolar planet are, let alone intelligent life. Or whether solar systems like ours are necessary for life to develop at all (having a Saturn beyond a Jupiter appears to be necessary to prevent the Jupiter – by which I mean a gas giant planet – spiralling into its star forming a ‘hot’ Jupiter, which appears common in the Universe. And having a Jupiter in its position being necessary to eject much of the matter of the inner solar system to be ejected, allowing the formation of Earths rather than superearths in the ‘Goldilock’s’ zone.