When Ricky Muir came into the Senate, everyone expected him to vote with the Coalition, at least on national security. Boy, were they wrong. Crikey intern Aron Lewin and writer-at-large Guy Rundle explain. 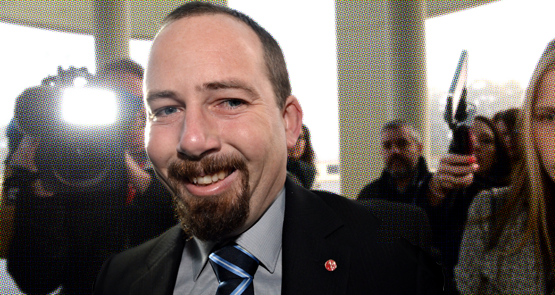 When the debate about terrorism and citizenship went crazy earlier this year, and the government and right-wing media were whipping each other into ever greater frenzies, many observed that a calm voice of reason was required.

Most likely, no one imagined that that voice would be Senator Ricky Muir. In the pages of the “chattering classes” journal, The Guardian, Muir noted that the government was ruling by fear and wedging the ALP through “fear mongering and scare campaigning”. That it was written by, rather than ghost-written for, Muir was suggested by his admonition to the government to “… have a good, calm argument to back up their views — not jump up and down screaming that the boogie man is coming in the hope that everybody will pull the blankets over their head and pee the bed”.

No doubt it surprised many readers. It surprised the government even more, as the Coalition had believed that, whatever his other enthusiasms, Muir could be counted on to toe the line on “national security” — given the frenzy that was being whipped up on the front pages of the tabloids.

Yet if they were hoping for a predictable “redneck” response, they hadn’t been paying attention. Since his surprise election in 2013, Muir has been bucking expectations in what he supports and champions. Pretty early on it became clear that Muir was his own man on issues such as employment, industrial relations and rural development.

The right quickly wrote him off as a reliable stooge quite a few months ago on those matters. Yet even though it’s clear that Muir always had a consistent, if unarticulated, working-class politics, his recent forays — into renewable energy, security laws, and same-sex marriage — have raised the question as to where Muir stops and his smart new office starts. In particular, there are questions as to the influence of Jonathan Sharman, his new principal adviser.

Ricky Muir began in a way that didn’t fill many on the left with enthusiasm — elected as a representative of the Australian Motoring Enthusiasts Party, with 0.5% of the primary vote in Victoria. The party sounded like an Age reader’s nightmare, established and run by a Queensland couple, Keith and Sharyn Littler.

After the surprise election, it didn’t get any better. A video surfaced of Muir playing about with mates, chucking kangaroo droppings at each other. Pretty harmless stuff, but it easily added to the portrait of Muir as a gormless revhead. More serious was a Mike Willesee interview, in which an ineptly media-managed Muir was exposed to the full scorn of tabloid journalism, unable to answer basic questions, and still had his mic on when he took a break to get a drink of water. When it was announced that he was allying with Clive Palmer’s three Palmer United Party senators as part of a four-MP bloc, it appeared the fix was in, and the Queensland coal baron now controlled the Senate.

Yet almost from the start, Muir bucked expectations. He made a special and specific plea for the Australian Renewable Energy Agency (ARENA), striking a deal to save the authority and add on to Palmer’s plan to retain the RET. The initiative to preserve ARENA was claimed as an initiative by Glenn Druery, the “preference whisperer” who had tutored many of the micro-parties in preference swaps — and, it is alleged, put the deals, if not the parties, together. Druery leans rightwards, but he’s an urbane metropolitan, and many wondered how he would co-exist with the more stereotypical revhead Littler.

“Briefly” was the answer. Druery departed almost immediately, in July 2014, labelling Muir a “good guy but very inexperienced”. Another staffer, Susan Bloodworth, left immediately in protest. A third staffer, Peter Breen, was sacked for “taking a sickie” — though the unofficial rumour is that they were kicked out by Littler. By then, Muir was in open warfare with the Victorian branch of the AMEP, claiming that they were “puppets” to Littler. The Motoring Enthusiasts tried to expel their own senator from the party; instead the branch was dissolved.

The relationship had reportedly soured, with Glenn Druery saying that the AMEP founder was “negligent” in his handling of Muir, previously calling him an “oxygen thief” and sending him to meetings where he was grossly under-prepared. Some wondered if Muir would last the distance and whether the ongoing chaos and disorganisation would cause him to resign and be replaced by another AMEP office-bearer, such as Littler himself. In the end, Muir stayed, and Keith and Sharyn Littler left the party earlier this year.

Indeed, it was around this time that Muir first began to prove himself. Crikey was the first to reveal that Muir was not the dependable right-wing bot as had been assumed, documenting his time as a shop steward for the feared CFMEU, in Gippsland. A year later, The Saturday Paper suggested that Muir was moving closer to the ALP. And in May 2015 he made a maiden speech that had people sit up and take notice. Modest and heartfelt, it talked of true representative democracy, the importance of penalty rates and — his crowning achievement in the Senate — preventing 31 children from being returned to Nauru detention centre

He wrote an impassioned opinion piece for The Age about the “soul destroying” nature of unemployment, gained from personal experience and advocated for “well-structured programs … that help jobless youth build transitional skills to get into the workforce”. He also harnessed the views of rural Victorians in order to canvass support for marriage equality.

No one doubts that Muir has learnt on the job. But support for same-sex marriage is something rather off-road for Motoring Enthusiasts — and quite possibly contrary to the views of many. And thus people point to the role of Jonathan Sharman, his new senior adviser. Sharman, a smooth lawyer, was previously with the Australian Building and Construction Commission. Sharman joined Muir around March 2015, and the maiden speech followed shortly afterwards. However, Crikey has been told that Muir’s wife and volunteer for the Muir office, Kerrie-Anne, sets the direction of the Ricky show.

Of his new found independence, Muir told RN Drive that the biggest lesson he has learned in his first year as a senator was that “everybody has got an agenda”. The link with Palmer is long gone: “It’s a long time since I had a coffee with Clive,” he said. Whether he can keep up the pace remains to be seen. One source says Muir is a great guy, but holds no desire to become more influential. Muir firmly describes himself as a “centralist”, but he’s running not merely towards the Labor side of things, but towards the Greens.

“The tone of my first speech was set solely by myself. Some members of my staff were privy to small sections of the speech but nobody was aware of the direction of the speech. Especially considering I did not complete writing it until within the hour before I presented it.

My position on marriage equality is that of my own and has been a view of my own since before being involved with politics and has continued after many varying conversations since taking my seat. I have discussed this in radio interviews with the likes of JJJ after announcing my position.

My wife works within my office in strictly a voluntary capacity assisting on a range of issues from as small as filing correspondence through to attending meetings, taking notes and liaising with constituents and other staffers.”

On the road again: can Ricky Muir capture lightning in a bottle?

Its been interesting to watch Ricky and no doubt will be into the future.

Perhaps we should regard Muir as an asset. At least he has real life experience unlike so many members who are professional politicians, ex-staffers, union hacks and lawyers

I guess for some Allies may be needed desperately, but Ricky Muir as your latest Paladin?

If Muir, essentially the Everyman thrust into his role as Senator, is looking more and more to share similarities with the Greens, perhaps that would suggest that, quite aside from the usual drivel about Greens policies being unworkable or unpalatable to the great unwashed, they are sensible and desirable by middle Australia.

In this regard, he’s not unlike Senator Lazarus – everyday guys, now in the house of review, Senators who seem to take seriously their role to review rather than rubber-stamp …. and increasingly aligning with the so-called extremists, the Greens.

Some are born great, some achieve greatness, and some have greatness thrust upon them.