Obama’s historic Kenya visit: a land of promise, in a moment of peril

Obama's recent visit to Kenya spotlighted a country at a crossroads, at once dependent on Chinese investment, and entranced by Western culture. Writer and broadcaster Kirsten Drysdale explains. 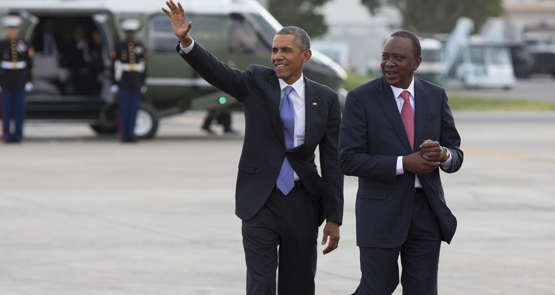 CNN is on the nose with Kenyans at the moment. First, while covering the Garissa University massacre earlier this year, the network reported from “Nairobi, Nigeria” and showed a map of the region with Uganda labelled “Tanzania”.

Then, in the lead-up to Barack Obama’s landmark visit to Nairobi last weekend, the station broadcast a report that claimed he was “heading to a terror hotbed” on par with Syria or Afghanistan. Look up #SomeoneTellCNN on Twitter to see how locals felt about that particular choice of words.

CNN’s errors are a sore point for Kenya, where the tourism industry has been devastated by international media outlets that now prefer clips of al-Shabaab militants running wild with AK-47s over shots of sleepy leopards up acacia trees. In the wake of the 2013 attack on the Westgate Mall (which reopened a week ago), thousands of Westerners cancelled their long-booked holidays, leaving the safari lodges eerily quiet. Overzealous travel advisories from twitchy governments haven’t helped, and the mzungus (or “white people”) are only starting to warily trickle back now. The dark joke around town is the mzungus would be safer in the Serengeti than they are in their cinemas at home.

The Kenyans’ point — a long-held frustration — is that Africa is more than Ebola, bombs and dictators in the same way America is more than obesity, gun nuts and Donald Trump. They’ve also got Fashion Week and music awards and charity fundraisers and celebrity gossip, and they hoped that Obama’s three days in Nairobi might help show that side of life. I’m not sure it did.

While world news updates mostly focused on his team’s security precautions, locally the #ObamaHomecoming was the subject of ecstatic rolling coverage, a boon for street hawkers flogging star-spangled anythings, and a curious spectacle for anyone following Africa’s rise with interest.

This is a guy who’s painted on the side of matatus (or minibuses) between Mother Teresa and Moses. And although he’s visited Kenya a few times before, once as a senator, this time it’s different: it’s not just that he’s the first sitting US president to visit the country. He’s the first sitting US president to visit family here. After arriving on Friday night he went straight to a welcome dinner where he sat between his grandmother and half-sister. He later joked about trying to find his birth certificate while in town, called himself “the first Kenyan-American President”, and greeted fans in Swahili slang. This was an occasion so momentous that it caused a spike in digital set-top boxes for televisions in bars across the country, so that people sipping Tusker beer and chai could watch it unfold live.

At the US-sponsored Global Entrepreneurship Summit (ostensibly the reason for his trip), he applauded the rapidly growing trend for Africans to pursue business development rather than seek aid, saying economic opportunity was “the spark of prosperity” and “a positive alternative to the ideologies of violence and division”. Obama especially praised the ingenuity of African programmers in the “silicon savannah”, and he’s got a point. After all, Apple Pay isn’t even a Western idea. M-Pesa — an SMS-based banking system — started here way back in 2007, and it’s a huge part of why Kenya has one of the fastest-growing economies in the world. SIM cards are as integral to Kenya’s identity as Simba.

Kenya’s roaring enthusiasm only quieted when Obama spoke his mind on the the importance of fighting corruption and upholding human rights. And yes, he insisted to their great displeasure, that included the gays. Saying he was “painfully aware of the history when people are treated differently under the law”, Obama compared the discrimination experienced by the LGBTI community in much of Africa with America’s racially segregated past, but even that analogy is unlikely to persuade many here on this issue. Kenya is a country with a great deal more appetite for the gospel than the rainbow flag.

Obama would have seen a lot of Kenya through the tinted windows of his armour-plated Cadillac (aka The Beast) as his convoy drove across town on the new Chinese-built highways, locked down for his exclusive use.

In only three years, the number of apartment buildings and new roads in this place has seemingly doubled. So has the traffic, and you’re now as likely to be cut off by a Great Wall ute as you are a Toyota Hilux. Precarious scaffolding climbs the skyline in every direction across the city, wrapped with scrappy green shade cloth and almost always bearing the name of a Chinese developer.

Mombasa Road — the freight truck-clogged highway linking the capital with the coast — is flanked on one side by brand-new housing estates and on the other by a half-constructed standard-gauge railway. The handshake for this $5 billion project (90% of that paid in Yuan) took place back in 2013, when President Uhuru Kenyatta visited China on the way home from Russia, his first foreign visit as head of state. Kenyatta was facing five counts of crimes against humanity in the International Criminal Court at the time, over Kenya’s 2007 post-election violence, but Chinese President Xi Jinping was happy to greet him with a 21-gun salute. (The charges against Kenyatta have since been dropped, although his deputy, William Ruto, is still on trial.) It’s not so easy for virtuous Western countries to push that sort of baggage aside.

Every day the Mombasa-Nairobi line lunges further toward the Rift Valley, with pre-fab slabs of concrete sleepers and steel lowered from huge red gantry cranes that straddle the track bed. Eventually, the line will connect Kenya, Uganda, Rwanda and South Sudan. Blue site banners translate Chinese characters into peculiar affirmations like “Efficiency is life, quality is fundamental!” and “Self improvement, good competition; Appreciate each other!”. There’s little doubt the thousands of orange-vested Kenyan labourers scattered along the route appreciate the work, or that Nairobi’s growing middle class appreciates the promise of a train to the beach in half the time and at a quarter the price of the perilous road journey, but whether ordinary Kenyans and the new colonials really “appreciate each other!” beyond the economic exchange is somewhat less certain.

Certainly in the game parks, where safari guides have learnt how to say ni hao to their new clientele, there’s some bitter whispering about the increase in ivory poaching across the continent and the environmental cost of these “no strings attached” Sino-African partnerships. Incidents revealing racial tensions on a social level aren’t uncommon either, such as when a Chinese restaurant owner in Nairobi was arrested for refusing entry to African patrons. Put it this way: there were no rapturous crowds lining the streets waving Chinese flags when Premier Li Keqiang visited Kenya last year.

More than half a century independent of the British, this promising country must now balance Chinese money with Western cultural influence and the existential task of keeping al-Shabaab at bay — a job that’s currently being done by the Kenyan Army with the help of American drones.

During his speech at the Global Entrepreneurship Summit, Kenyatta had a dig at the CNN faux pas, saying “Kenya is a ‘hotbed’ of vibrant culture, spectacular natural beauty, and infinite possibility”. He was dead right. So was Obama when he said “Kenya is at a crossroads, a moment filled with peril but enormous promise.”

What the rest of the world must appreciate is that when the country is deciding which direction to take, it will most likely forge its own path. Whether it’s one that will please its people as much as its politicians remains to be seen.

Vulnerable Kenya on the brink of collapse

Letter from: Nairobi, where crimes against humanity set the mood

Loved your portrait of Kenya today – and I thought you were only a comic talent!