Using maths to reveal the newspaper Australians trust most. And other business tidbits of the day.

Who cares about newspapers? Newspaper circulations may be nosediving, but, publishers say, nothing’s quite as influential as a front-page splash. Is that really the case? Marketing consultant and hobby psephologist Andrew Catsaras has hit upon the idea of comparing audience to trust metrics to measure the influence of newspapers.

Doing this results in the following table for the major newspapers, which, Catsaras argues, shows The Sydney Morning Herald is four times as influential as The Daily Telegraph, as a greater proportion of its readers view it as trustworthy …

Of course, News Corp editors fiercely reject the idea that Essential surveys are a good measure of the trust readers have in their papers, arguing instead that circulation is a better metric — readers, the argument goes, vote with their wallets about how much they trust a paper. Fairfax’s paid circulations have declined at a faster rate than News Corp’s, but the SMH and Age consistently rate in Essential surveys as the two most trusted newspapers in the country, followed by The Australian, which is, in turn, followed by the News Corp tabloids. — Myriam Robin

Zahra backs newspapers. Speaking of trust, a full-page ad taken out last month in News Corp papers by 53 brands in support of gay marriage has led to another ad — this time by newspaper lobby Newspaper Works, as the latest installment of its “Influential by Nature” campaign. Australian Marriage Equality deputy director Ivan Hinton-Teoh said: “The paper was selected as the ‘perfect medium’ to reach business and political audiences”. Here’s the ad that ran in the Daily Tele, featuring former David Jones chief Paul Zahra … 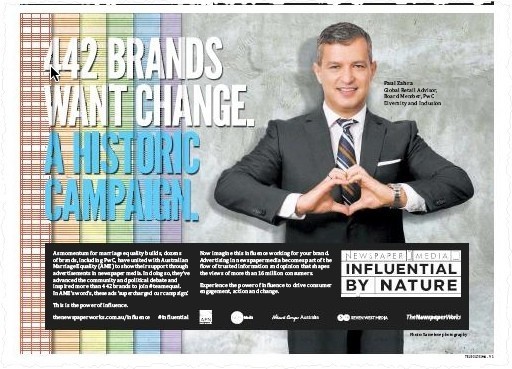 Free-to-air going great guns (in the UK). As we saw this week, ad revenues in Australia remain weak — in fact, no better than they were five years ago, so it’s no wonder the commercial networks are doing it tough and cutting costs. But contrast that with the UK, where the country’s major commercial free-to-air network, ITV, reported a 25% jump in pre-tax profits for the June half-year, despite a 4% drop in audience numbers. ITV says profits reached 391 million pounds, or more than $820 million, as revenues rose 11% to 1.36 billion pounds (more than $2.8 billion). Revenues at its production division, ITV Studios, which has been on a buying spree with a string of purchases including Talpa Media, maker of The Voice, and Mammoth Screen (Poldark), was up 23% to 496 million pounds ($1.041 billion). ITV Studios pre-tax profit rose 18% to 85 million pounds ($180 million).  ITV’s better-known programs at the moment include Downton Abbey, The X Factor (both on Seven) and Broadchurch (ABC).

More than half of the studios’ revenue now comes from outside the UK from countries such as the US and Australia, where it produced I’m A Celebrity … Get me Out of Here for the Ten Network earlier this year. That has been renewed for 2016. It is one of ITV’s staple “reality” programs in the UK. But ITV’s channels recorded a 4% fall in audience share to 22.1% in the six months to June. UK viewing levels were weaker as streaming video (iPlayer, the BBC’s dominant streaming source) and the arrival of US offerings via Netflix steal viewers away, on top of the losses to mobile viewing on smartphones and tablets. Despite that slide in viewing, ITV’s broadcast and online revenue rose 6%, while earnings before interest, tax, depreciation and amortisation jumped 26%. ITV net advertising revenue was up around 5% in the first half, and the company is looking at a 8% growth rate in the current quarter, and 6% for the nine months to September (in Australia the sector will be lucky to see growth of 1% to 2%).  — Glenn Dyer 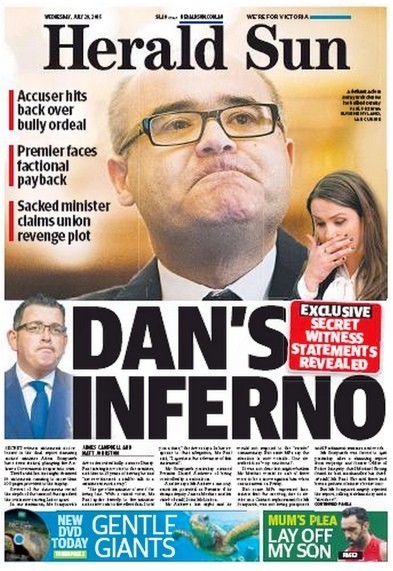 Those “trussed” figures – what about in a market where one paper has virtually no competition?